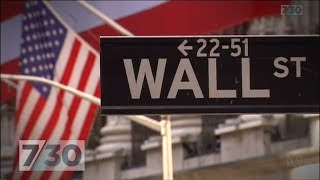 Debt bomb: Are we on the brink of a global financial crisis?
(Image by YouTube, Channel: ABC News (Australia))   Details   DMCA

Since June 2009, Americans have lived in the false reality of a recovered economy. Various fake news and manipulated statistics have been used to create this false impression. However, indicators that really count have not supported the false picture and were ignored.

Another characteristic of a long expansion is high and rising business investment. However, American corporations have used their profits not for expansion, but to reduce their market capitalization by buying back their stock. Moreover, many have gone further and borrowed money in order to repurchase their shares, thus indebting their companies as they reduced their capitalization! That boards, executives, and shareholders chose to loot their own companies indicates that the executives and owners do not perceive an economy that warrants new investment.

How is the alleged 10-year boom reconciled with an economy in which corporations see no investment opportunities?

Over the course of the alleged recovery, real retail sales growth has declined, standing today at 1.3%. This figure is an overstatement, because the measurement of inflation has been revised in ways that understate inflation. As an example, the consumer price index, which formerly measured the cost of a constant standard of living, now measures the cost of a variable standard of living. If the cost of an item in the index rises, the item is replaced by a lower cost alternative, thus reducing the measured rate of inflation. Other price increases are redefined as quality improvements, and their impact on inflation is neutralized.

Economic shills explain away the facts. For example, they argue that people are working more hours, so their real earnings are up although their real wages are not.

Others argue that the declining labor force participation rate reflects baby boomer retirements. Of course, if you look around in Home Depot and Walmart, you will see many retirees working to supplement their Social Security pensions that have been denied cost of living adjustments by the under-measurement of inflation.

Other economic shills say that the low unemployment rate means there is a labor shortage and that everyone who wants a job has one. They don't tell you that unemployment has been defined so as to exclude millions of discouraged workers who could not find jobs and gave up looking. If you have not looked for a job in the past four weeks, you are no longer considered to be in the work force. Thus, your unemployment does not count.

It is expensive to look for employment. Scarce money has to be spent on appearance and transportation, and after awhile the money runs out. It is emotionally expensive as well. Constant rejections hardly build confidence or hope. People turn to cash odd jobs in order to survive. It turns out that many of the homeless have jobs, but do not earn enough to cover rent. Therefore, they live on the streets.

The 21% rate makes sense in light of Census Bureau reports that one-third of Americans age 18-34 live at home with parents because they can't earn enough to support an independent existence.

Related Topic(s): American Capitalism; American Recovery And Reinvestment Plan; Economy Built On Debt; Economy Recession; Jobs; Offshoring; WalMart, Add Tags
Add to My Group(s)
Go To Commenting
The views expressed herein are the sole responsibility of the author and do not necessarily reflect those of this website or its editors.