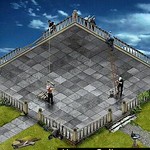 Author, Karen Armstrong, wrote this interesting morsel about certainty. "At the end of an unsettling conversation with Socrates, Laches had a 'conversion' (metanoia), literally a 'turning around.' This did not mean that he had accepted a new doctrinal truth; on the contrary, he had discovered that, like Socrates himself, he knew nothing at all.

Socrates had made him realize that the value system by which he had lived was without foundation; as a result, to go forward authentically, his new self must be based on doubt (aporia) rather than certainty. The type of wisdom that Socrates offered was not gained by acquiring items of knowledge but by learning to be in a different way."

Jacques Derrida, the late French social theorist, proposed that the process of deconstruction would arrive at the same conclusion when he said, "there is nothing outside the text."

In other words, what we consider knowledge rests on a pile of presuppositions so deep, critical examination will finally lead to what Laches found--aporia, "a difficulty encountered in establishing the truth of a proposition."

This confusion is usually created by the presence of evidence both for and against the proposition. If we are opened minded enough to vary our sources of information we already know this.

Now consider how certain we are of our political, religious and social beliefs. In particular, how evidence can be found both for and against our beliefs. And to put a finer point on it, how those beliefs can affect other people in either positive or negative ways.

Last week, I offered a column on compassion. In that piece, I pointed out that our country is split on the issue of the basic human nature. I wrote that I believe people want to earn their own way, but half our society believes the opposite, that people are basically lazy and need to be prodded and controlled to carry their own weight.

Compounding our dilemma is the problem of cognitive bias. I have a cognitive bias codex in my office that lists almost 200 types. I use it to remind myself of how my thinking can be compromised, leading me to wrong conclusions.

There is one that is very common in today's world of constant streaming data. It's called confirmation/disconfirmation bias. We find evidence for and against any proposition to validate what we already believe. In a practical sense, we believe the evidence that confirms our point of view and ignore what doesn't.

Then we generalize our point of view, which under the best of conditions is only a tiny shaving, a tiny slice of reality, that may or may not be accurate, regardless of how deeply we believe it.

For instance, we read about Muslim terrorists, and some people generalize that all Muslims are terrorists.

And on this flimsy foundation, we affect the lives of other people in ways that condemn them to a life of discrimination and marginalization or grant them basic human rights and dignity. Here I'm speaking of gay people, people of other religious traditions, other colors, other countries, on the other side of the political aisle, etc.

I'm as guilty as everyone else. Try as I may, I find it almost impossible to consider legitimate, opinions that conflict with my values. Yet, I know that if we aren't willing to acknowledge our differences, we are paralyzed, locked in a death grip that will eventually destroy us and everything we love.

So, no matter how deeply we feel about our point of view, we must allow that others feel with the same intensity. And in the same moment, acknowledge that our ways of knowing are just as questionable as theirs.

Related Topic(s): Bias; Compassion; Conflict; Illusion; Information; Learning; Polarity; Truth; Value; Wisdom, Add Tags
Add to My Group(s)
Go To Commenting
The views expressed herein are the sole responsibility of the author and do not necessarily reflect those of this website or its editors.