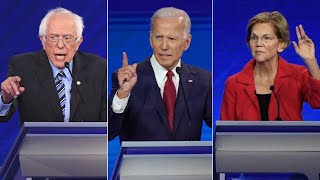 The presidential debate held in Houston Thursday night was a three-hour demonstration of the vast distance between the Democratic Party and the American working class.

The debate was held only 48 hours before the contract expiration for 158,000 autoworkers, in the most important US manufacturing industry. It came only six weeks after the ouster of the governor of Puerto Rico, a US territory, after mass demonstrations of hundreds of thousands directed against the two-party political elite and the Wall Street banks.

But nowhere in the interminable event broadcast by ABC was there any discussion of the conditions of life of the class that comprises the vast majority of the population of the United States. The millionaires seeking the Democratic presidential nomination and the millionaire "journalists" like George Stephanopoulos and David Muir who moderated the event inhabit a different world than the broad mass of working people.

There was zero discussion of the issue that is invariably described as the number one concern in opinion polls: jobs and the economy. There was no discussion of poverty and rising economic inequality. And while two major industries came in for demagogic attack -- the health insurance giants and the drug companies -- there was not the slightest criticism of the capitalist system.

Instead, there was the usual combination of demagogic promises, canned one-liners and mutual backstabbing, followed by vacuous rhetoric about the need for unity and the desire to serve the people -- the baloney offered up in every election cycle. The purpose is to cover up the class realities in America: the capitalist class controls the two major parties, while the working class, the vast majority of the population, is politically disenfranchised. It is given a "choice" in the presidential election between two equally right-wing representatives of the corporate elite.

Vermont Senator Bernie Sanders began the debate by declaring that he would "tell you what you don't hear much about in Congress or in the media ... this country is moving into an oligarchic form of society where a handful of billionaires control the economic and political life of this country."

Perfectly true, but while Sanders claimed that "as president, I am prepared to take them on," he was not even able to "take them on" at the debate in Houston. No other Democrat addressed the issue, and Sanders himself never returned to it.

Nor did the panel of questioners take it up. That silence is predictable given that ABC News is owned by the Walt Disney Company, a media conglomerate with nearly $60 billion in revenue and $12.6 billion in net profits last year.

Sanders acknowledges that the dominance of the super-rich represents a growing threat to democracy. Yet he claims that the mere election of a president named Bernie Sanders will transform American capitalism into a Garden of Eden. The lion will lie down with the lamb, and the oligarchy will meekly accept the enactment of policies that take trillions of their wealth to pay for universal health care, child care, free college tuition, and the elimination of student debt.

Sanders plays a specific role in the Democratic Party. He provides a left cover for this right-wing, corporate-controlled organization. His prominence in the presidential campaign is invariably cited as proof that the party has moved to the left, under conditions where the Democratic Party has become the favorite of both Wall Street and the military-intelligence apparatus.

Particularly since Trump entered the White House, the Democrats have tried to channel all popular opposition to the administration in a right-wing direction. This has taken the form of the anti-Russia campaign, which through bogus allegations that Trump is a Russian stooge has sought to generate popular support for a more aggressive assertion of American imperialist interests against Moscow in the Middle East, Central Asia, Ukraine and Eastern Europe.

In Thursday's debate, this right-wing imperialist orientation dominated the brief discussion on foreign policy. There was much criticism of Trump's trade war with China, but purely of a tactical character -- poorly organized, erratic, impulsive, etc. There was full agreement that China is the main threat to US world domination and must be fought at all costs.

Former Housing Secretary Julian Castro called for the use of human rights issues as "leverage" against China, claiming that "millions of Uighurs" are "right now are being imprisoned and mistreated" in China. Particularly blunt were the comments of former Vice President Biden: "[W]e're in a position where, if we don't set the rules, we, in fact, are going to find ourselves with China setting the rules. And that's why you need to organize the world to take on China ..."

While all the candidates claimed that they would withdraw from Afghanistan -- a worthless pledge they made in previous debates -- there was silence on Trump's ratcheting up of economic and military pressure on Iran, his arming of Saudi mass killing in Yemen, the continuing civil war in Syria, and the sharp turn to the right in Israel, including the Trump-Netanyahu policy of annexation of the Golan Heights and, likely after the Israeli elections, large parts of the West Bank.

Patrick Martin writes for the World Socialist Website (wsws.org), a forum for socialist ideas & analysis & published by the International Committee of the Fourth International (ICFI).
Related Topic(s): American Capitalism; Democratic Cowards; Democratic Debates; Presidential Debates; Presidential Race 2020, Add Tags
Add to My Group(s)
Go To Commenting
The views expressed herein are the sole responsibility of the author and do not necessarily reflect those of this website or its editors.