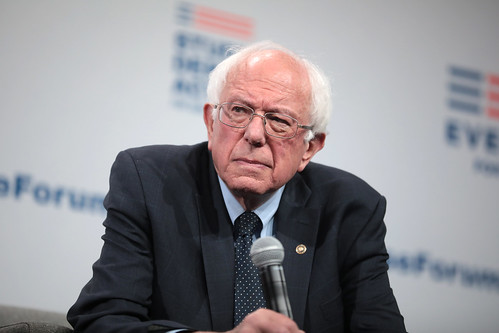 The day after Bernie Sanders's big win in Nevada, Joe Lockhart, Bill Clinton's former press secretary, expressed the fear gripping the Democratic establishment: "I don't believe the country is prepared to support a Democratic socialist, and I agree with the theory that Sanders would lose in a matchup against Trump."

Lockart, like the rest of the Democratic establishment, is viewing American politics through obsolete lenses of left versus right, with Bernie on the extreme left and Trump on the far right. "Moderates" like Bloomberg and Buttigieg supposedly occupy the center, appealing to a broader swath of the electorate.

This may have been the correct frame for politics decades ago when America still had a growing middle class, but it's obsolete today. As wealth and power have moved to the top and the middle class has shrunk, more Americans feel politically dis-empowered and economically insecure. Today's main divide isn't right versus left. It's establishment versus anti-establishment.

Some background. In the fall of 2015 I visited Michigan, Wisconsin, Ohio, Pennsylvania, Kentucky, Missouri, and North Carolina, researching the changing nature of work. I spoke with many of the same people I had met 20 years before when I was secretary of labor, as well as some of their grown children. I asked them about their jobs and their views about the economy. I was most interested in their sense of the system as a whole and how they were faring in it.

What I heard surprised me. Twenty years before, most said they'd been working hard and were frustrated they weren't doing better. Now they were angry at their employers, the government, and Wall Street; angry that they hadn't been able to save for their retirement, and that their children weren't doing any better than they did. Several had lost jobs, savings, or homes in the Great Recession. By the time I spoke with them, most were employed but the jobs paid no more than they had two decades before.

I heard the term "rigged system" so often I began asking people what they meant by it. They spoke about the bailout of Wall Street, political payoffs, insider deals, CEO pay, and "crony capitalism." These came from self-identified Republicans, Democrats, and Independents; white, black, and Latino; union households and non-union. Their only common characteristic was they were middle class and below.

With the 2016 primaries looming, I asked which candidates they found most attractive. At the time, party leaders favored Hillary Clinton or Jeb Bush. But the people I spoke with repeatedly mentioned Bernie Sanders and Donald Trump. They said Sanders or Trump would "shake things up," "make the system work again," "stop the corruption," or "end the rigging."

In the following year, Sanders a 74-year-old Jew from Vermont who described himself as a democratic socialist and wasn't even a Democrat until the 2016 presidential primary came within a whisker of beating Hillary Clinton in the Iowa caucus, routed her in the New Hampshire primary, garnered over 47 percent of the caucus-goers in Nevada, and ended up with 46 percent of the pledged delegates from Democratic primaries and caucuses.

Trump, a 69-year-old ego-maniacal billionaire reality TV star who had never held elective office or had anything to do with the Republican Party, and lied compulsively about almost everything won the Republican primaries and then went on to beat Clinton, one of the most experienced and well-connected politicians in modern America (granted, he didn't win the popular vote, and had some help from the Kremlin).

Something very big happened, and it wasn't because of Sanders's magnetism or Trump's likeability. It was a rebellion against the establishment. Clinton and Bush had all the advantages -- funders, political advisers, name recognition -- but neither could credibly convince voters they weren't part of the system.

A direct line connected four decades of stagnant wages, the financial crisis of 2008, the bailout of Wall Street, the rise of the Tea Party and the "Occupy" movement, and the emergence of Sanders and Trump in 2016. The people I spoke with no longer felt they had a fair chance to make it. National polls told much the same story. According to the Pew Research Center, the percentage of Americans who felt most people could get ahead through hard work dropped by 13 points between 2000 and 2015. In 2006, 59 percent of Americans thought government corruption was widespread; by 2013, 79 percent did.

Trump galvanized millions of blue-collar voters living in places that never recovered from the tidal wave of factory closings. He promised to bring back jobs, revive manufacturing, and get tough on trade and immigration. "We can't continue to allow China to rape our country, and that's what they're doing," he roared. "In five, 10 years from now, you're going to have a workers' party. A party of people that haven't had a real wage increase in 18 years, that are angry." He blasted politicians and financiers who had betrayed Americans by "taking away from the people their means of making a living and supporting their families."

Trump's pose as an anti-establishment populist was one of the biggest cons in American political history. Since elected, he's given the denizens of C-suites and the Street everything they've wanted and hasn't markedly improved the lives of his working-class supporters, even if his politically-incorrect, damn-the-torpedo's politics continues to make them feel as if he's taking on the system.

Related Topic(s): Bernie Sanders; Bernie Sanders 2020 Presidential Candidate; Democratic Candidate Electability In 2020; Democratic National Convention; Democratic Socialist, Add Tags
Add to My Group(s)
Go To Commenting
The views expressed herein are the sole responsibility of the author and do not necessarily reflect those of this website or its editors.