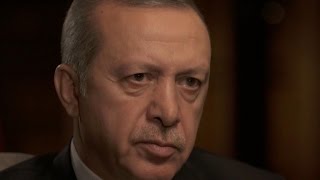 I have been in your country scores of times and developed close and friendly relations with many Turks from all walks of life, who all took pride in the incredible progress Turkey made under your leadership. During your first 10 years as prime minister, you transformed Turkey economically, socially, and politically, and put the country on the path to greatness as an emerging regional and global power. This is why, Mr. Erdogan, it pains me to witness a once-great reformer destroying his own impressive achievements that any leader would have sustained with all their might. You have chosen this destructive path at the pinnacle of your career, when you could have left an historic mark on Turkey's future that rivals even Turkey's founder Mustafa Kemal Ataturk.

The list of your transgressions is painful but necessary to numerate because their magnitude has far-reaching implications on Turkey and may well doom its prospect of capturing its rightful place on the world's stage. My hope is that Turkey can still be saved from your tyrannical reign that has transformed Turkey into a police state, divided its citizenry, and wrecked what's left of its democracy.

You had an historic opportunity to offer a model of Islamic democracy to the Arab world in the wake of the Arab Spring. Instead, you froze all political reforms and pushed Islam deeper into the country's secular education by expanding religious education in learning institutions to cultivate a new observant Islamic generation. This is not what the Turkish people aspire for; they want a true Western-style democracy with Islamic values as was envisioned by Ataturk.

You came close to fulfilling your people's dream when you adopted the Accession Partnership with the EU that provided Ankara with a roadmap to make Turkey an active member of the European community, using its vast human and natural resources to make it a constructive powerhouse on the global stage. But then you abandoned European social and political ideals, destroying Turkey's prospective EU membership while flirting with Russia to the utter dismay of the Turkish people and Western allies.

What a noble idea it was to pursue a sound foreign policy doctrine based on "zero problems with neighbors," that you proudly advocated. But then you alienated both traditional and new friends of Turkey, and sadly today Turkey has problems with just about every neighbor -- Cyprus, Greece, Iraq, Iran, Syria, Armenia, and the Caucasus are all estranged from Turkey, not to mention your tense relations with the EU and the United States.

And how could you reverse course with your own Kurdish community? They are Turkish citizens -- why deny them their inherent right to live in accordance with their cultural heritage? You went on a rampage to discriminate against them as if they were your sworn enemies. No, Mr. Erdogan. When you clamp down on the legal pro-Kurdish Peace and Democracy Party and arrest Kurdish notables and intellectuals for presumed links with the PKK, don't expect loyalty -- you are merely inviting increasing violence. You openly threaten the Iraqi Kurds with retaliation as they pursue independence, fearing your own Kurds would follow in their footsteps -- yet you fail to realize your belligerent policies are only exacerbating the separatism you fear.

You cynically claim that Turkey is a democracy, but you restrict peaceful public demonstrations, which is the hallmark of a democracy. The Taksim Square unrest and your harsh treatment of demonstrators only reaffirms that Turkey under your rule has become a one-man government. Following the demonstration, you initiated a brutal campaign against those who participated in the demonstration to spread fear and suppress the people's voice.

I know you take pride -- and for good reason -- in growing the economy by nearly tripling Turkey's GNP during your first years as prime minister. But then, the poverty rate of the population in Turkey is at a high of 22.4 percent -- a staggering one quarter (20 million) of the Turkish population. This is not a reality that you care to recognize; you deny it to suit your inflated ego about the wonder of Turkey's economic miracle.

You flagrantly abolished the State Security Courts, violated the rights of defenders and detainees, restored police brutality, and put civil and political rights in free play. Have you glanced at Human Rights Watch's World Report documenting that under your watch the government unjustifiably prosecuted alleged speech crimes and used arbitrary terrorism laws? Ordinary Turks are terrified that someone is listening to their conversations, and they can't even tweet without fear of being investigated for their thoughts.

You emasculated the military, which has served as the custodian of a secular and democratic country, using NATO's demand to subordinate the military to the civilian authority as an excuse. With no compunction, you discharged nearly 3,000 officers while assuming the prerogative to issue direct orders to the heads of all military branches, to prevent the military from ousting you from power and prosecuting you for pursuing an Islamic agenda, the way they prosecuted three of your predecessors.

You display unbridled arrogance to the West, accusing Germany of using "Nazi measures" for their refusal to allow your supporters to hold rallies in Germany to demonstrate your sway and outreach, just so you can feed your oversized ego. You exhibited naked satisfaction as you watched your bodyguards shamelessly beat peaceful protesters in Washington and New York, because the concept of dissent and protest is completely alien to you, even in foreign lands.

Under the cover of fighting ISIS, you focused instead over the past three years on fighting the Syrian Kurds. Several credible reports suggest that you have been buying oil from ISIS, thereby aiding them financially as well as in their recruitment efforts by allowing thousands of volunteers to cross the Turkish border into Syria to join their ranks. You turned a blind eye to ISIS' heinous crimes because their Islamic credentials mattered more to you than the lives of thousands of innocent people.

Corruption? It is rampant on your watch. Bribery charges have implicated municipal employees, businessmen, the sons of three of your ministers, and your own son. Rather than taking these charges seriously, you dismissed high-ranking officials who are pursuing the investigation. Your obstruction of justice was so obtrusive, it evoked criticism even from members of your own AK Party.

Related Topic(s): Open Letter; President Erdogan; Presidential Powers; Rights; Turkey, Add Tags
Add to My Group(s)
Go To Commenting
The views expressed herein are the sole responsibility of the author and do not necessarily reflect those of this website or its editors.