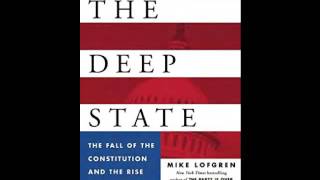 Yesterday marked the 3rd anniversary of Mike Lofgren's interview on Bill Moyers and Company regarding his "Essay: Anatomy of the Deep State". [1]

The anniversary has no particular significance in itself yet the Deep State" has been in the news lately since the firing of Michael Flynn as President Trump's National Security advisor.

Too much has already been said and written of the "Flynn affair" so it's not the purpose of this piece to further dwell on it.

Instead it's the "deep state" that is the focus here and particularly the insights of Mike Lofgren. Here's some excerpts from the Moyers interview three years ago-and still timely.

As Lofgren puts it, "There is another government concealed behind the one that is visible at either end of Pennsylvania Avenue, a hybrid entity of public and private institutions ruling the country according to consistent patterns in season and out, connected to, but only intermittently controlled by, the visible state whose leaders we choose. This is not a secret, conspiratorial cabal; the state within a state is hiding mostly in plain sight, and its operators mainly act in the light of day. In terms of its scope, financial resources and sheer global reach, the American hybrid state, the Deep State, is in a class by itself. It is neither omniscient nor invincible. The institution is not so much sinister (although it has highly sinister aspects) as it is relentlessly entrenched. Far from being invincible, its failures, such as Iraq, Afghanistan and Libya are routine enough that it is only the Deep State's protectiveness towards its higher-ranking personnel that allows them to escape the consequences of their frequent ineptitude."

"It is a hybrid of national security and law enforcement agencies; the Department of Defense, the Department of State, the Department of Homeland security, the Central Intelligence Agency and the Justice Department. also the Department of the Treasury because of its jurisdiction over financial flows, its enforcement of international sanctions and its organic symbiosis with Wall Street. All these agencies are coordinated by the Executive Office of the President via the National Security Council, whose actions are mysterious even to most members of Congress. Also are a handful of vital trial courts, the eastern District of Virginia and the Southern District of Manhattan, where sensitive proceedings in national security cases are conducted. The final government component is a kind of rump Congress consisting of the congressional leadership and some members of the defense and intelligence committees. The rest of Congress, normally so fractious and partisan, is mostly only intermittently aware of the Deep State and when required usually submits to a few well chosen words from the State's emissaries."

"The Deep State does not consist only of government agencies, 'private enterprise' is an integral part of its operations. There are now 854,000 contract personnel with top-secret clearances- a number greater than that of top-secret-cleared civilian employees of the government. The membrane between government and industry is highly permeable: The Director of National Intelligence James R. Clapper, is a former executive of Booz Allen Hamilton, one of the government's largest intelligence contractors. Booz Allen is 99 percent dependent on government business. These contractors now set the political and social tone of Washington, just as they are increasingly setting the direction of the country, but doing it quietly, their doings unrecorded in the Congressional Record or the Federal register, and are rarely subject to congressional hearings."

"Washington is the most important node of the Deep State that has taken over America, but it is not the only one. Invisible threads of money and ambition connect the town to other nodes. One is Wall Street, which supplies the cash that keeps the political machine quiescent and operating as a diversionary marionette theater."

"Most of the avatars of the Deep State are careful to pretend they have no ideology. They are deeply dyed in the hue of the official ideology of the governing class, an ideology that is neither Democrat nor Republican. They believe in the 'Washington Consensus'; financialization, outsourcing, privatization, deregulation and the commodifying of labor. Internationally, they espouse 21st century 'American Exceptionalism' : the right and duty of the United States to meddle in every region of the world with coercive diplomacy and boots on the ground."

"After Edward Snowden's revelations about the extent and depth of surveillance by the National Security Agency, it has become publicly evident that Silicon Valley is a vital node of the Deep State as well. Silicon Valley has long been tracking for commercial purposes the activities of every person who uses an electronic device, so it is hardly surprising that the Deep State should emulate the Valley and do the same for its own purposes."

"Despite the essential roles of lower Manhattan and Silicon Valley, the center of gravity of the Deep State is firmly situated in and around the Beltway. That the secret and unaccountable Deep State floats freely above the gridlock between both ends of Pennsylvania Avenue is the paradox of American government in the 21st century: drone strikes, data mining, secret prisons on the one hand; on the other, the ordinary, visible parliamentary institutions of self-government declining to the status of a banana republic amid the gradual collapse of public infrastructure."

"The Deep State is the big story of our time. It is the thread that runs through the war on terrorism, the financialization and deindustrialization of the American economy, the rise of a plutocratic social structure and political dysfunction. Washington is the headquarters of the Deep State...extracting value from the American people in vampire-like fashion."

What they are doing- initiating unending wars, occupations, authorizing torture, extraordinary rendition, indefinite detention, drone strikes and missile attacks that kill innocents, authorizing assassinations, coups, regime change et al is ALL criminal, all sinister. Call it white collar crime if you will as most dress in suits and ties with a few in military uniform. That doesn't make them less criminal, less sinister.

Retired. The author of "DECEIT AND EXCESS IN AMERICA, HOW THE MONEYED INTERESTS HAVE STOLEN AMERICA AND HOW WE CAN GET IT BACK", Authorhouse, 2009
Related Topic(s): Deep State, Add Tags
Add to My Group(s)
Go To Commenting
The views expressed herein are the sole responsibility of the author and do not necessarily reflect those of this website or its editors.