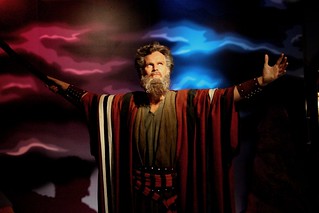 The Ten Commandments ( 1956 )
(Image by Prayitno / Thank you for (9 millions +) views)   Details   DMCA
When I was a kid, growing up in the 1950s, I loved the religious spectaculars one could see at the movie theaters--films like The Ten Commandments and Ben Hur. I've never found it easy to believe that there is a God who intervenes in human affairs to punish the wicked and reward the good. But I loved entering that world in these enthralling works of the imagination.

I loved watching how God sent Moses to Egypt to tell Pharaoh to let his enslaved people go, and then watching how the power of the Lord punished the hard-hearted Pharaoh for his refusal, first by the death of the Pharaoh's first born son and then by the drowning of the force of fine chariots Pharaoh sent to drag the Hebrews back into bondage.

The dream of a world ruled by justice is an ancient and worthy one.

Lately it struck me that the recent death of Supreme Court Justice Antonin Scalia -- in conjunction with events that immediately preceded it, and consequences that may well result from it -- is something that a good script-writer might render into another such biblical morality tale.

Imagine this pitch to a movie exec:

We start out in the backroom of the Supreme Court, the pitch begins. The nine Supremes are sitting around a table considering a case that's come up to them. After we hear a few snippets of dialogue indicating what the case is about, we dissolve into the back-story.

So there's this crisis facing the whole earth: the climate is changing rapidly, and it looks like it could be really bad. Water shortages. Failed crops. Wars breaking out over scarce resources. Worse and worse weather catastrophes. Species going extinct left and right.

We get it that everybody who's honest about it recognizes that everyone's children and grandchildren could really get the shaft--unless people take serious action. Everybody who knows what's what knows there's an urgent need for people act to together to their descendants, blood of their blood, from a terrible fate.

God feels strongly about this. I mean, this is His Creation, and He wants people to stop wrecking it. If ever there was a time for people to take on the responsibilities of the stewardship the Lord entrusted to humankind, this is it.

One night the Lord calls out the President of the United States --from a bush in the Rose Garden that burns but is not consumed -- and tells him in no uncertain terms that he's got to do something about this gathering crisis.

So the president has his people come up with a plan -- the Clean Power Plan they call it. It's to be an important start. And it has a global importance, since it is the world's leading nation will start living up to commitments that almost all the nations of the world -- at long last -- have agreed on. And so this Plan represents some hope that maybe humankind can escape the worst and come through OK.

Let's get started, is the idea, while we've got a chance.

Word goes out to all the states: everybody needs to put their shoulder to the wheel and work on implanting this Plan.

But there's something out there in the country that doesn't want what God wants. It's a kind of Greed Power that does nothing but grasp for more. The people who run it are willing to deceive people to keep the money rolling in--even though that deception sacrifices everyone's children and grandchildren.

This Greed Power -- working through the corporations and a few powerful billionaires whose business disrupts the climate -- has bought so much of the American political system (including one whole political party) that a lot of the states go to Court to try to stop this Clean Power Plan.

Andy Schmookler, an award-winning author, political commentator, radio talk-show host, and teacher, was the Democratic nominee for Congress from Virginia's 6th District. His new book -- written to have an impact on the central political battle of our time -- is
Related Topic(s): Climate Change; Corporatism; Justice Antonin Scalia; Supreme Court SCOTUS; Supreme Court SCOTUS, Add Tags
Add to My Group(s)
Go To Commenting
The views expressed herein are the sole responsibility of the author and do not necessarily reflect those of this website or its editors.