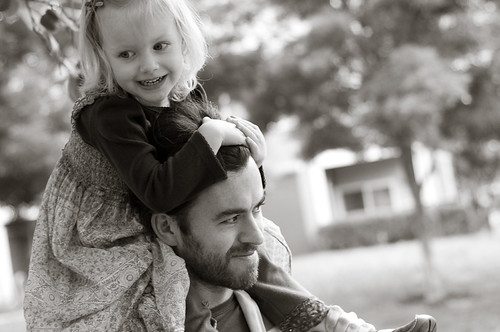 If you have a father, wish him well this Father's Day, for his days are numbered. I am not specifically referring to your father, but to fathers generally. They are an endangered species, bound for extinction.

I won't direct you to the copious sources for this assertion, but anyone who pays the slightest attention knows that our mad scientists are hard at work changing the old equation: man plus woman equals baby. Search the internet if you dare and you will see that "artificial babies" are on the drawing board - coming soon. First, men are being reduced to sperm producers and bankers; then the sperm will be produced without them. It's like money making money: profit without work. For a while longer, women will do some egg work and womb bearing. Eventually they too will become dispensable as Babymart superstores open around the country. "Come on in, folks, check them out, take your pick." Rows and rows of synthetic babies at low prices. Buy an extended warranty at the checkout. Save yourself time and effort. Why cook when you can eat out for less?

Yes, the times they are a-changin!

I'm so glad I had a father. Be glad with me, if you do too. Celebrate his existence.

My father died twenty-three years ago. He was an inveterate letter writer. Every Father's day I read a large folder of letters he sent to me over the years. Yesterday, on a beautiful late spring afternoon, glass of red wine at hand (he couldn't stomach white), I sat out on the porch and listened to his inimitable voice beguile, instruct, and entertain me. We were together again. He had me laughing out loud in a voice that could be no other. It was his voice speaking to me, and I felt that bittersweet feeling that comes with love, its loss and potential loss.

In the beginning and end are the words. If we are lucky, we hear them. But there has to be someone to say them. I have heard that sperm, natural or artificial, can't speak.

From his hospital bed my father wrote, "I am hooked up to a heart monitor and have been examined by a neurosurgeon named Block. I think he is H.R. Block of tax forms. I have also just signed a consent form for a CAT scan. I think that's to see if I like cats."

It's sad to think that letter writing may have ended and future generations left bereft of this deepest of consolations. For voices bring presence. My father and I are together again through his letters. His absence becomes a presence and my heart aches for him.

"I have been doing quite a bit of reading," he wrote, "including some stuff on the Middle Ages. After a study in depth, so to speak, I'm more convinced than ever that the whole world is nuts and has been for some time. The Almighty must either laugh, get disgusted or whatever. He created man and gave him free will and all the stupid bastards do is make war. It sure is nothing new. Quien sabe? [who knows]"

Not a big clothes horse (he once went on vacation, and when he arrived and opened his suitcase it was empty -- he didn't pack anything), he relied on my mother to buy him clothes. On my mother trying to buy him pants: "Seems that my waist is too big and my ass too small. I think I'll get a tummy tuck."

"Yesterday one of my clients was a blind oriental with a seeing eye dog whose wife, also legally blind, snatched his cane and tried to push him in front of a car. The reason, however, that he is blind is that he killed his first wife a few years ago and shot himself in the head causing blindness. He has also threatened to kill this wife. Another of my clients was a 14 year old Puerto Rican girl who with four others mugged an older woman on the subway at 4:45 AM. My charmer is accused of threatening the victim with a gun. Talking to her in detention, I asked her why the gun bit and she said, 'She was giving us a hard time.' I asked what she meant by that and she replied, "She wouldn't give up the bag.' Next case! Quien Sabe?"

"I hope you are keeping some sort of record," Leonard Cohen intones in a song. It's good advice. Soon there will be for many no known father, no voice, no letters, no record, just some sperm deposited somewhere for someone. Nowhere fathers, and then soon no fathers. I can hear my father saying, "You can bank on that."

Back from a doctor's visit, he reports: "The doctor said I have only two problems -- from the waist up and the waist down. But from the neck up I think I'm okay. Cogito ergo sum."

Related Topic(s): Fathers Day, Add Tags
Add to My Group(s)
Go To Commenting
The views expressed herein are the sole responsibility of the author and do not necessarily reflect those of this website or its editors.