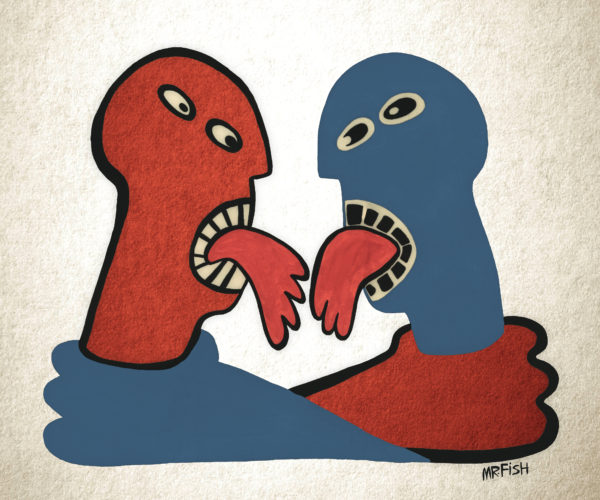 The continued inability of America's liberal democratic establishment to address the ills besetting the country -- climate change, unregulated global capitalism, mounting social inequality, a bloated military, endless foreign wars, out-of-control deficits and gun violence -- means the inevitable snuffing out of our anemic democracy. Overwhelmed by the multiple crises, the liberal elites have jettisoned genuine political life and retreated into self-defeating moral crusades in a vain and futile attempt to deflect attention away from the looming social, political, economic and environmental catastrophes.

These faux moral crusades, now the language of the left and the right, have bifurcated the country into warring factions. Opponents are demonized as evil. Adherents to the cause are on the side of the angels. Nuance and ambiguity are banished. Facts are manipulated or discarded. Truth is replaced by slogans. Conspiracy theories, however bizarre, are incredulously embraced to expose the perfidiousness of the enemy. Politics is defined by antagonistic political personalities spewing vitriol. The intellectual and moral sterility, along with the inability to halt the forces of societal destruction, provides fertile soil for extremists, neofascists and demagogues who thrive in periods of paralysis and cultural degeneracy.

Liberals and the left have wasted the last two years attacking Donald Trump as a Russian asset and look set to waste the next two years attacking him as a racist. They desperately seek scapegoats to explain the election of Trump as president, no different from a right wing that tars its Democratic Party enemies as America-hating socialists and that blames Muslims, immigrants and poor people of color for our national debacle. These are competing cartoon visions of the world. They foster a self-created universe of villains and superheroes that exacerbates the mounting polarization and rage.

"Bourgeois society seems everywhere to have used up its store of constructive ideas," Christopher Lasch wrote in 1979 in "The Culture of Narcissism." "It has lost both the capacity and the will to confront the difficulties that threaten to overwhelm it. The political crisis of capitalism reflects a general crisis of western culture, which reveals itself in a pervasive despair of understanding the course of modern history or of subjecting it to rational direction. Liberalism, the political theory of the ascendant bourgeoisie, long ago lost the capacity to explain events in the world of the welfare state and the multinational corporation; nothing has taken its place. Politically bankrupt, liberalism is intellectually bankrupt as well."

The online magazine Slate recently published a transcript of a town hall meeting between Dean Baquet, the executive editor of the New York Times, and the Times staff. It was a fascinating window into the hubris and cluelessness of the paper, the ruling elites' primary news organ, which has spent the last two years shredding its credibility by hyping the investigation by Robert Mueller and the conspiracy theory that Trump was a Russian asset. Here is Baquet on the newspaper's reporting on Trump:

"Chapter 1 of the story of Donald Trump, not only for our newsroom but, frankly, for our readers, was: Did Donald Trump have untoward relationships with the Russians, and was there obstruction of justice? That was a really hard story, by the way, let's not forget that. We set ourselves up to cover that story. I'm going to say it. We won two Pulitzer Prizes covering that story. And I think we covered that story better than anybody else.

"The day Bob Mueller walked off that witness stand, two things happened. Our readers who want Donald Trump to go away suddenly thought, 'Holy sh*t, Bob Mueller is not going to do it.' And Donald Trump got a little emboldened politically, I think. Because, you know, for obvious reasons. And I think that the story changed. A lot of the stuff we're talking about started to emerge like six or seven weeks ago. We're a little tiny bit flat-footed. I mean, that's what happens when a story looks a certain way for two years. Right?

"I think that we've got to change. I mean, the vision for coverage for the next two years is what I talked about earlier: How do we cover a guy who makes these kinds of remarks? How do we cover the world's reaction to him? How do we do that while continuing to cover his policies? How do we cover America, that's become so divided by Donald Trump? How do we grapple with all the stuff you all are talking about? How do we write about race in a thoughtful way, something we haven't done in a large way in a long time? That, to me, is the vision for coverage. You all are going to have to help us shape that vision. But I think that's what we're going to have to do for the rest of the next two years."

This is not journalism. It is moral purity masquerading as journalism. And it will, like the "Russia-gate" conspiracy, be useless to blunt Trump's support, explain and cope with our innumerable crises or heal the growing divide.

The problem that the paper, along with the Democratic Party and its liberal allies, faces is that it is captive to its corporate sponsors who orchestrated our grotesque income inequality, deindustrialization, out-of-control military machine, neutered media and muzzled scholarship. The paper, therefore, rather than turn on its corporate advertisers and elitist readers, first blamed Russia and now blames white supremacists. The longer such demagoguery continues on the left and the right, the more the country will be torn asunder.

Hannah Arendt in "The Origins of Totalitarianism" pointed out that ideologies are attractive in times of crisis because they reduce and simplify reality to a single idea. While the right wing blames the decline on darker races, the liberal elites blame the decline on Russia or racists. It is the ideology, not experience or fact, that is used "to explain all historical happenings, [to provide] the total explanation of the past, the total knowledge of the present, and the reliable prediction of the future," she wrote.

All ideologies demand an impossible consistency. This is achieved by a constant mutation and distortion of reality until it becomes, as the Mueller investigation did, absurdist theater. The result for believers, Arendt wrote, is disorientation, heightened fear and paranoia.

These types of collective self-delusions have always existed in American society, as the historian Richard Hofstadter pointed out. Such self-delusions, he wrote, are "made up of certain preoccupations and fantasies: the megalomaniac view of oneself as the Elect, wholly good, abominably persecuted, yet assured of ultimate triumph; the attribution of gigantic and demonic powers to the adversary."

Related Topic(s): Culture; Fascist; Inequality; Military; Moral Hazard; Policy; Racism; Wars, Add Tags
Add to My Group(s)
Go To Commenting
The views expressed herein are the sole responsibility of the author and do not necessarily reflect those of this website or its editors.