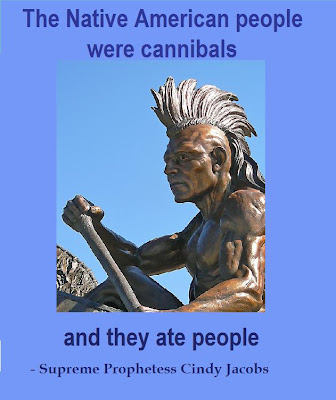 (Image by Unknown Owner)   Details   DMCA
>On September 12th, when people were ruminating on the weighty issues of security and economy, Cindy Jacobs obsessed on Native Americans and their heritage being a curse on America. Although she took her inspiration from Bryan Fischer of the American Family Association, she didn't bother to distill her rhetoric.


The Native American people were cannibals and they ate people. And so you can see a manifestation of that in the churches where people turned against people and kind of cannibalized other people's ministries.
The self-proclaimed prophetess and leader of a militant evangelical group called Generals International, has, in the past, set her sites (or rather, God's) on causes of catastrophes and weird phenomena, positing that birds falling from the sky were a sign of God's displeasure at the repeal of  DADT  and that Japan's woes were tied to the fact that it is "shaped like a dragon."

Now she has come to wage war against Native Americans and their heritage: according to her, a "curse" upon America was lifted because of Rick Perry's "The Response."

We just had a prayer meeting in Houston a little a week ago, the governor of Texas, really as an individual instigated this, and 35,000 people showed up to pray and it was only a prayer meeting called within three months, three month period of time. So what happened? The land is starting to rejoice, you see, because of that prayer."

In her rush to judgment about raising curses from the American landscape, Jacobs, of course, got it all wrong:

Native Americans were not cannibals.* Her inane leap of reasoning somehow blames "the curse" for political factions within church denominations. Rick Perry used his position as governor to call "The Response." More than 70,000 people were expected and "The Response" was not even deemed a moderate success. And as one of God's Ambulance Chasers, Jacobs didn't bother to link the lifting of "the curse" to a natural calamity (the Texas wildfires occurred later than The Response), so how did the land start to rejoice?

It would be imprudent, however, to discount the unreasonable ramblings of Jacobs as ineffective: she has a following large enough to engage people in doing damage to Native Americans. She hits buzzwords with a beguiling innocence, thus setting into motion a violent hatred of people whose heritage is considered "heathen."

Taking a cue from Rod Parsley's view on Islam ("America was establish to destroy Islam"), Jacob's sentiments might be looked upon not only as a enabler to the future abolition of Native American heritage, but also a call to arms against all Native Americans who haven't thoroughly converted to Christianity: it is, in effect, another strategy of "convert or die" apologetics.

Many of the tribal reservations today remain mired in poverty and alcoholism because many native Americans continue to cling to the darkness of indigenous superstition instead of coming into the light of Christianity and assimilating into Christian culture.**

That "Christian culture" Fischer alludes to is one that excludes a lot more people than a relative handful of people on tribal reservations: Muslims, Jews, Mormons, and even Catholics.***

None Dare Call It Genocide

While some people may think that the term genocide does not apply to the machinations of Cindy Jacobs, Bryan Fischer, John   Benefiel ,  et   al ., think of them as  precursers  of the ideology that the "only good non-Christian is a dead non-Christian": demolishing a heritage makes it much easier to eradicate that part of civilization attached to it. Hitler knew that when he attempted to level all the Jewish sections of occupied cities: he only kept Prague's beautiful  Josefov  in tact (complete with its 800-year-old synagogue) as a "museum of extinct peoples."

Another look at the origins of what we could call "heritage genocide" reveals Rev. John  Benefiel  of the Heartland Apostolic Reformation Network who recently called the Statue of Liberty an "idol." Several years ago,  Benefiel  and his compatriots made a ritualistic splash in smashing Hopi and Navajo artifacts since they were believed to be manifestations of worship of Baal and  Leviathon  - Canaanite gods.  Benefiel  never sufficiently described just how those gods traversed the Atlantic (maybe an evil worshipper sneaked onto Colombus' Santa Maria).

On October 3rd,  Benefiel , Jacobs and other members of the Apostolic Reformation movement will descend upon Washington, D.C. with   "DC 40: Forty Days of Light Over D.C".  Will it bring about the destruction of Baal in our nation? Or will it further curse our nation with intense religious bigotry over indigenous people, Muslims, and people of all other ideologies?

Rev. Dan Vojir is has been writing/blogging on religion and politics for the better part of ten years. A former radio talk show host (Strictly Books " Talk America Radio Network) and book publisher, Dan has connected with some of the most (more...)
Related Topic(s): Bigotry; Bryan Fischer; Cindy Jacobs; ENABLER; Genocide; Hopi; Indigenous Cultures; John Benefiel; Native Indian Reservation; Navajo; (more...) Race Native American- First Nation; Rick Perry, Add Tags  (less...)
Add to My Group(s)
Go To Commenting
The views expressed herein are the sole responsibility of the author and do not necessarily reflect those of this website or its editors.