Srebrenica Historical Project: The role of "confessions" at the Hague Tribunal

More on confessions at International Criminal Tribunal for the former Yugoslavia (ICTY): A different view

Much of what passes for key evidence at International Criminal Tribunal for the former Yugoslavia (ICTY) can be traced back to the confessions of accused persons. An example is Momir Nikolic, whose "statement of facts" attached to his plea bargain with the Prosecution in 2002 finally lent an appearance of substance to the reburial narrative. The reburial story was launched originally to explain the relative paucity of human remains at execution sites and to lend credence to the claim of a massive, guilty Srebrenica cover-up in the Fall of 1995. [1] Miroslav Deronjic's confession, also part of a plea bargain agreement, is supposed to have implicated high ranking Republika Srpska political and military figures Karadzic, Mladic, and Beara in planning and ordering the Srebrenica massacre. Dragan Obrenovic's confession, wrung under similar circumstances, filled large holes in the Prosecution's case at the command level of the Zvornik brigade, thye military unit in whose zone of responsibility the Srebrenica prisoner massacre for the most part occurred.

One of the most famous confessions at ICTY was that of Dr. Biljana Plavsic, a member of the Republika Srpska Presidency during the war in Bosnia. Mrs. Plavsic was indicted by the Tribunal in 2000 on eight counts, including genocide, persecution, extermination, and the litany of usual charges. In 2001, she voluntarily surrendered to face trial jointly with Momcilo Krajisnik, another war-time Presidency member. In October 2002, Mrs. Plavsic entered a plea agreement accepting guilt for the single count of persecution, while the remaining counts were dismissed.

This backdrop is necessary to contextualize a scholarly article, or at least a text with such pretensions published in a scholarly journal. It focuses on the plea bargain process in the Plavsic case in order to exemplify the author's critical view of the of ICTY's plea bargaining practices. At ICTY that necessarily includes not just acceptance of criminal responsibility in some form but also a public confession of wrongdoing. The author is Jelena Subotic, a political science professor at Georgia State University. Her text is entitled "The Cruelty of False Remorse: Biljana Plavšić at the Hague." It was published in Southeastern Europe 36 (2012) 3959. The text in its entirety is attached below.

Mrs. Subotic's reflections on this important topic, while interesting in many respects, exhibit an overall approach that is highly problematic. While advancing a friendly critique of some ICTY practices, she does not touch some sensitive but fundamental issues. Matter-of-factly, she assumes that the Tribunal for the Former Yugoslavia in the Hague is a legitimate judicial organ genuinely engaged in a quest for judicial truth. She also accepts implicitly that confessions are a reliable instrument for establishing legal facts, ignoring uncritically massive evidence that makes that assumption highly suspect. She does not even in passing refer to diverse views in scholarly literature on this subject.

Based on these controversial assumptions, Mrs. Subotic proceeds to criticize ICTY for "significant inconsistencies in ICTY procedures and sentencing" and for disappointing the "expectation and hope displayed by many international justice promoters that war crimes trials may lead to truthful confessions, apologies, or acknowledgments of abuses." As evidence, she presents her version of ICTY's handling of the Plavsic case, "focus[ing] on individualizing accountability for mass atrocity" which according to Mrs. Subotic makes it "ill equipped to deal with the collectivist nature of such crimes".

These are very strong and questionable assertions, and we will briefly deal with them in turn.

As a careful reading of Mrs. Subotic's article suggests, her contention that ICTY is inconsistent in its sentencing practice, as evidenced inter alia by a mere eleven-year sentence meted out to Mrs. Plavsic, is based largely on the charges, including genocide, in the original indictment. But, of course, all but one of the counts in the original indictment were ultimately dropped once the defendant signed the plea bargain, so it would have been awkward for the Chamber to disregard that fact and base its sentencing rationale on the full complement of the original charges. Even ICTY does not do that. Also worth noting is that Mrs. Plavsic's would-be co-defendant Momcilo Krajisnik, who remained in the dock after she dropped out of the case, originally was also charged with genocide, but the trial chamber ultimately found him innocent on that score. Since Krajisnik and Plavsic held positions of similar rank and influence, it is theoretically possible that had Plavsic gone through the trial she also might have been acquitted of genocide. It could of course be argued that the remaining charge of persecution, to which Mrs. Plavsic pled guilty, is serious enough and merited a sterner sentence. That might have been the case had there been some factual basis, beyond mere confession (see Michel Foucault's trenchant observations on the role of confessions in medieval jurisprudence) to support it. However, no such basis emerged since there was no trial and no probative evidence pointing to Mrs. Plavsic's guilt on any of the counts was ever presented or tested in open court. Even if we were to accept that ICTY is a proper tribunal, that tribunal did not make any deliberative findings on Mrs. Plavsic's guilt beyond taking her word for it.

But even if we set aside what Foucault had to say on the subject, which is of sufficient importance, as Mrs. Plavsic made clear in her subsequent writings and statements, she "confessed" not because of unbearable pangs of conscience she was experiencing over misdeeds that were charged to her but which she obviously did not believe that she had committed, but entirely for reasons she considered to be practical. It is as simple as that, and Mrs. Subotic's extensive quotes from Plavsic's memoirs and prison interviews fully corroborate it. [Pages 48,49] A person is hardly to be blamed for attempting to outwit an institution she believes to be persecuting her unjustly, and for wanting to profit from an otherwise unfair situation.

Mrs. Subotic somewhat angrily excoriates Plavsic for "perpetrat[ing] a cynical fraud against the international tribunal and victims of crimes she ordered, endorsed, or failed to prevent". But, to reiterate, since there was no trial no proof was ever submitted beyond prosecutorial allegations that Plavsic "ordered, endorsed, or failed to prevent" any crimes. There is a fundamental difference between a charge, which is a simple allegation, and a proper judicial finding arrived at after submission of evidence and following due deliberation. At least formally, that is the procedure that even ICTY claims to follow. So should Mrs. Subotic.

Mrs. Subotic omits entirely the fundamental issue of the political setting in which Plavsic's plea bargain and "confession" took place. To use Mrs. Subotic's own terminology [p. 48], the Plavsic plea bargain was indeed a cynically political operation, only it was not perpetrated by the defendant but by the Tribunal. It should be recalled that around 2002 the dramatic confession of a high profile defendant would have greatly enhanced ICTY's image simply by showing that the Tribunal was achieving results. Pressure on Yugoslav authorities to persuade or cajole a large number of Serbian fugitives, who were in hiding, to surrender to the Tribunal, which subsequently enabled a new round of trials, bore fruit only several years later. The measure of ICTY's desperation in 2002 is evidenced by the fact that in the Plavsic case Chief Prosecutor Carla Del Ponte gave in to the defendant's obstinate demand, making the significant and singular exception, which was contrary to ICTY's regular procedure, not to require Plavsic to testify as a prosecution witness in other trials. The Tribunal was clearly focused on obtaining at any price the "high value target's" voluntary admission of guilt and it was prepared to make concessions. Most likely, the reason Mrs. Plavsic was offered a relatively mild prison sentence was not because of the Tribunal's confused or inconsistent sentencing policy, or out of respect for her gender or past scholarly accomplishments [p. 42], but, whether Mrs. Plavsic was aware of it or not, because at the time the bargaining was taking place she did hold a few good cards. The Tribunal needed, for the galvanizing effect, a high ranking Serbian defendant to "confess" to practically anything perhaps even more than Plavsic needed the Tribunal to escape the rigors of a lengthy trial. Hence, Plavsic's disingenuous "statement of remorse" was welcomed. In the end it did not turn out what it was initially cracked up to be, but because of apparent benefits to the Tribunal's image and operation, as Mrs. Subotic correctly observes, it "received incredible political and scholarly attention". [Page 46] The subsequent disappointment of the Tribunal's supporters is understandable, but morally an unjustly cornered person is fully entitled to resort to stratagems to alleviate his or her plight.

Mrs. Subotic's reference to the "expectation and hope displayed by many international justice promoters that war crimes trials may lead to truthful confessions, apologies, or acknowledgments of abuses" is awkward, to put it mildly. The author is a political scientist and she is entitled, of course, to hopes and expectations within her scholarly domain. However, from their professional standpoint lawyers might take strong exception to this utterly nonsensical and perhaps also politically motivated statement. No, the purpose of war crimes trials, or any trials for that matter, is not to produce confessions and apologies but to establish facts. Only in Stalin's Russia and Mao's China was there an expectation that trials would lead to confessions. Such an expectation renders the concept of a trial in the Western sense of the word largely superfluous.

Curiously, Mrs. Subotic's continuous insistence on Plavsic's politically presumed guilt is not borne out even anecdotally by anything she adduces in her text. The closest the author comes to imputing some form of blameworthy conduct to Plavsic is where she quotes the latter's ethnic slurs at the expense of Bosnian Muslims. [Page 51] The cited comments indisputably are intemperate, but by US First Amendment standards they still constitute permissible speech. And whatever one might think of it, they do not come within the purview of the punitive provisions of the Tribunal's Statute.

Moreover, the articulation of such harsh and disparaging sentiments toward war-time adversaries is hardly unheard of. These Bosnian Muslim cartoons which brutally disparage Serbs carry a message at least as offensive as Mrs. Plavsic's remarks: 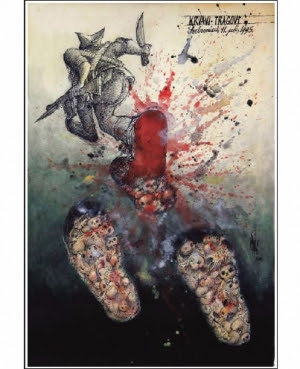 Related Topic(s): Bosnia War; Bosnian Genocide; Bosnian War, Add Tags
Add to My Group(s)
Go To Commenting
The views expressed herein are the sole responsibility of the author and do not necessarily reflect those of this website or its editors.