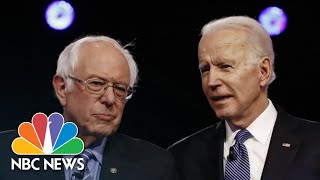 Bernie Sanders Suspends 2020 Presidential Campaign | NBC Nightly News Bernie Sanders announced he is suspending his presidential campaign, all but ensuring Joe Biden will be the Democratic nominee. .While this campaign is ...
(Image by YouTube, Channel: NBC News)   Details   DMCA

s we learned yesterday, Bernie Sanders ended his campaign for the 2020 Democratic presidential nomination and threw his support behind Joe Biden, betraying his followers for a second time. What a joke.

As if Bernie's betrayed followers are now going to vote for Biden simply because he isn't Trump. Of course. Ah no.

Our present Covid-19 pandemic is going to end one day. No one knows for sure. But surely before the November election.

Forget the polls now citing Biden being ahead of Trump. This is early April, not October.

It's mind boggling if Dems believe Biden is going to beat the Trumpster when before the election Trump will be seen as the leader who beat the virus in the US-as now occurred in China.

That's how it works. If before a presidential election the US economy is good a president running for re-election gets the credit and wins. If it's bad he gets the blame and he loses.

Reports yesterday revealed the virus has been beaten in Wuhan, China where it all began last December. As of midnight Wednesday Wuhan opened up spectacularly. Trains running, people congregating together in groups, shops and restaurants open. This after two months of severe quarantine measures.

Regardless how Wuhan and Chinese authorities ordered harsh quarantine procedures in Wuhan the city opening up has now shown the light at the end of the tunnel, even for the West and America.

That's because throughout human history people have recovered from virus pandemics. Otherwise we humans would have succumbed long ago. We get immunities from the viruses and survive.

Retired. The author of "DECEIT AND EXCESS IN AMERICA, HOW THE MONEYED INTERESTS HAVE STOLEN AMERICA AND HOW WE CAN GET IT BACK", Authorhouse, 2009
Related Topic(s): America; Bernie Sanders; Bernie Supporters; Biden Endorsement; Corona Virus Coronavirus Covid-19; Pandemic; Trump, Add Tags
Add to My Group(s)
Go To Commenting
The views expressed herein are the sole responsibility of the author and do not necessarily reflect those of this website or its editors.