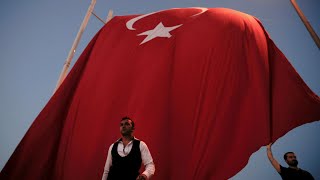 A failed coup in Turkey has changed the geopolitical landscape overnight realigning Ankara with Moscow while shattering Washington's plan to redraw the map of the Middle East. Whether Turkish strongman Recep Tayyip Erdogan staged the coup or not is of little importance in the bigger scheme of things. The fact is, the incident has consolidated his power domestically while derailing Washington's plan to control critical resources and pipeline corridors from Qatar to Europe.

The Obama administration's disregard for the national security interests of its allies, has pushed the Turkish president into Moscow's camp, removing the crucial land-bridge between Europe and Asia that Washington needs to maintain its global hegemony into the new century. Washington's plan to pivot to Asia, surround and break up Russia, control China's growth and maintain its iron grip on global power is now in a shambles. The events of the last few days have changed everything.

This is from the Daily Sahbah:

"Turkey's changing rhetoric toward Russia is also a direct consequence of Ankara's unmet expectations regarding the Syria conflict. Turkey's disappointment with the United States' policy in Syria has increased with time, especially considering Washington's continued support for the Kurdish fighters of the People's Protection Units (YPG) in Syria. Ankara sees this group as an affiliate of the Kurdistan Workers' Party (PKK) terrorist organization (Daily Sabah, 12 June).
(A Change in Turkish-Russian Relations: What Sort of Rapprochement? The Jamestown Foundation)

Obama can only blame himself for the debacle that is now unfolding. Erdogan was completely clear about Turkey's red lines, the most important of which is preventing the Kurdish militias from moving west of the Euphrates and creating a contiguous state along the Syrian side of Turkeys southern border. Here's Erdogan commenting on developments a few months ago:

"Right now, there is a serious project, plan being implemented in northern Syria. And on this project and plan lay the insidious aims of those who appear as 'friends.' This is very clear, so I need to make clear statements."

Instead of addressing Erdogan's security concerns, Obama brushed him aside in order to pursue the US goal of establishing bases and seizing territory in East Syria that will eventually be used as pipeline routes from Qatar to the EU. Naturally, Erdogan responded in kind, forming alliances with former enemies (Russia, Syria, Israel) in order to reset Turkish foreign policy and address the growing threat of an emerging Kurdish state on his southern flank.

Keep in mind, Turkey believes that America's new proxies in Syria -- the Kurdish YPG -- are linked to the PKK, which is listed as a terror organization by the U.S. and EU. Had Obama committed US troops to the fight, (instead of using the YPG) Erdogan would not have reacted at all. But the fact that Obama was deliberately strengthening Turkey's traditional rivals in their westward move, was more than Erdogan could bear.

At the end of June, Erdogan apologized to President Vladimir Putin for the death of a Russian pilot who was killed when Turkey downed a bomber flying over Syrian territory last November. The shoot-down prompted Putin to break off relations with Ankara, ending all communication between the two countries. Then, in the last week of June, Erdogan sent a letter to Putin "expressing his deep sympathy and condolences to the relatives of the deceased Russian pilot." He added that Russia was "a friend and a strategic partner" with whom the Turkish authorities would not want to spoil relations." (The Turkish pilots who shot down the Russian Su-24 have since been arrested and charged as members of the Gulenist coup.)

The White House inexplicably never commented on this thawing of relations which posed obvious risks to US ambitions in the region.

Then, just two weeks ago, reports began to emerge that Erdogan was making an effort to normalize relations with Syrian President Bashar al Assad. The news wasn't reported in most of the western media, but the Guardian ran an article titled "Syrian rebels stunned as Turkey signals normalization of Damascus relations." Here's an excerpt:

"More than five years into Syria's civil war, Turkey, the country that has most helped the rebellion against the rule of Bashar al-Assad, has hinted it may move to normalize relations with Damascus.
The suggestion made by the Turkish prime minister, Binali Yıldırım, on Wednesday, stunned the Syrian opposition leadership, which Ankara hosts, as well as regional leaders, who had allied with Turkey in their push to oust Assad over a long, unforgiving war.

Related Topic(s): Coup; Putin; Turkey Downs Russia Su24; Turkish President Recep Erdogan, Add Tags
Add to My Group(s)
Go To Commenting
The views expressed herein are the sole responsibility of the author and do not necessarily reflect those of this website or its editors.