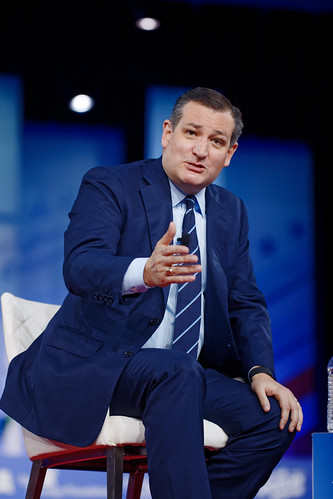 Texas is showing us all how the corruption that has overwhelmed the GOP has reached a crisis point, and it's killing people.

President Dwight Eisenhower said, "If a political party does not have its foundation in the determination to advance a cause that is right and that is moral, then it is not a political party; it is merely a conspiracy to seize power."

Sadly, Eisenhower's Republican Party is now there: they haven't governed to protect or help the people at the federal or state level since the Reagan Revolution. Today, instead, they simply engage in a corrupt form of political performance art while stuffing their pockets with corporate money.

Corrupt Texas Governor Greg Abbott is the poster child for corrupt Republicans' sellout to the fossil fuel industry. And the consequence of that will almost certainly kill hundreds of Texans this summer. But Abbott really, really doesn't want you to be thinking about that.

His latest scam to divert Texans' attention away from this malfeasance is to proudly declare that Texas is asserting its rights under the 10th Amendment to reject oversight or even advice from the federal government.

Texas, like most red states, takes in more federal dollars then they send to Washington DC; instead of merely calling Governor Abbott "corrupt" it's probably also time to call him a "welfare queen," a phrase much beloved of Republicans, at least when they apply it to Black women.

But the real "welfare" that Abbott and the whole collection of corrupt Texas Republicans have been living off for decades is the cash the fossil fuel industry and the billionaires it has created pour down their throats every year by way of campaign contributions and dark money support.

For example, back in 2014 the good citizens of Denton County Texas, sick of air and water pollution from fracking, passed a ballot initiative banning it in their county by over 60%.

That's the Texas Republicans' motto: "Screw the people; we just do what's necessary to help out the fossil fuel billionaires who own us."

Back in 1999, then-Governor George W. Bush, himself of fossil-fuel multimillionaire, separated almost all of the Texas power grid from those of neighboring states to avoid federal oversight. He put the Electric Reliability Council of Texas (ERCOT) in charge of the largely then-privatized grid.

Related Topic(s): Corruption; Killing Americans; People Hartmann Thom, Add Tags
Add to My Group(s)
Go To Commenting
The views expressed herein are the sole responsibility of the author and do not necessarily reflect those of this website or its editors.