He would rather fight imaginary threats. 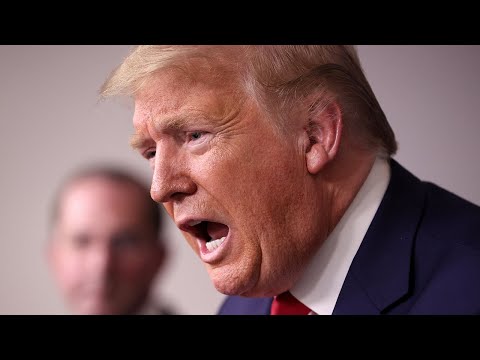 In the past week, the coronavirus has killed more than 5,000 Americans. Yet during this stretch, Donald Trump has said nothing about these lost souls. And since the gruesome 100,000 mark was hit at the end of last month, Trump has tweeted about the pandemic only a few times. Once to note this milestone, once to blame China for this "bad 'gift,'" once to vaguely claim there was "good news" coming on a vaccine, and once to hail the National Guard. Over the same period, he has tweeted relentlessly about his tough-guy approach to the wide-ranging Black Lives Matter protests, and he has used Twitter repeatedly to assail political enemies (the NFL commissioner, retired General James Mattis, Joe Biden, the media), to fuel his phony "Obamagate" scandal, and to spread the bogus conspiracy theory that an elderly man assaulted by a Buffalo cop during a protest was an Antifa provocateur trying to disrupt police communications with a "scanner." In fact, Trump has tweeted more about Antifa, the left-wing street activists, than the pandemic, depicting this unorganized band as an existential threat to the United States. How many Americans have been killed by Antifa? None. Coronavirus is still claiming nearly 1,000 lives a day.

If Trump's tweets are an indication of what's on his mind, he barely thinks about the pandemic and the horrific toll that it continues to take. When last week he visited a plant in Maine that manufactures swabs for coronavirus tests -- a plant that happens to be in a congressional district he won in the 2016 election -- Trump spoke for 30 minutes without mentioning the victims of COVID-19. Instead, he touted the recent encouraging economic news and declared, "Open the state." He referenced the coronavirus crisis -- "this horrible plague" -- in his usual fashion: he defended his administration's record on testing, and he blamed China for the pandemic. But he said nothing about the need to stay vigilant regarding masks, social distancing, and other countermeasures. (Trump even toured the plant without wearing a mask, and the swabs he watched being made in a sterile environment were later thrown out.) He said nothing about coronavirus remaining a serious threat to the United States.

Trump has essentially shoved the pandemic aside. Been there, done that. Time to move on. Even though the crisis continues and worsens in parts of the country. Puerto Rico and 14 states -- Alaska, Arizona, Arkansas, California, Florida, Kentucky, New Mexico, North Carolina, Mississippi, Oregon, South Carolina, Tennessee, Texas and Utah -- just experienced their highest weekly average of coronavirus cases. And the total number of COVID-19 cases in the United States this week topped 2 million.

Recently, the public learned that Trump doesn't want to be bothered by steady meetings on the pandemic. Dr. Anthony Fauci, the director of the National Institute for Allergy and Infectious Diseases and a leader of the White House coronavirus task force, said that his meetings with Trump "have been dramatically decreased." He told the AP that he had not spoken to Trump in two weeks. He also noted that task force meetings, which used to happen daily, "have not occurred as often lately." The news service reported that the task force "now has a smaller portfolio as the federal priority shifts to helping states safely reopen and the race for a vaccine has been put under the separate auspices of 'Operation Warp Speed,'" In an interview taped for the Biotechnology Innovation Organization's annual conference this week, Fauci said of the pandemic, "When is it going to end? We're still at the beginning of it."

In another sign that the Trump White House is moving the pandemic from the top of its to-do list, the coronavirus testing czar is leaving his position. Admiral Brett Giroir announced he will soon be "demobilized" from overseeing coronavirus testing at FEMA and head back to his old job at the Department of Health and Human Services. The administration said there were no plans to replace him.

With protests against police violence and social inequities spreading across the land, Trump has pivoted. In his address to the nation on June 1 -- prior to his Bible-holding stunt at St. John's Church -- Trump said nothing about the pandemic. Nothing about the Americans who are dying each day. And when he marched across Lafayette Park -- after security forces had violently cleared away peaceful protesters -- and awkwardly posed in front of the historic church, he and his large posse (with the exception of Ivanka Trump) wore no masks and did not engage in social distancing. He refuses to set an example for how citizens can keep COVID-19 at bay. The White House even compelled reporters at a Trump press briefing to sit closer to one another than the customary six feet.

Trump has not called on the country to be steadfast in its response to the killer virus. He has even not championed his administration's own guidelines for reopening. There still is no national testing strategy. And governors and other local officials have largely been left to their own devices in determining what to do. Trump has talked little about preparing for coming coronavirus spikes that are widely expected by public health officials. As he did at the start of the crisis, he has downplayed this chilling prospect.

Another profound crisis is now capturing the nation's attention. But that's all the more reason why the president of the United States should keep the country also focused on the public health threat that is still claiming thousands of Americans each week and that may roar back in the months ahead. Public health experts have raised concern that the protests could lead to a spread of the virus.

Yet it's obvious why Trump cannot help Americans in this way. Caring about the public's health doesn't coincide with his political agenda -- and his own pathologies. He is a man driven by the need for enemies and by the pursuit of revenge. A virus doesn't easily fit into his psychologically warped world view. He did endeavor to cast coronavirus as the "invisible enemy" that he would smite. But that soundbite fell flat, and Trump didn't have the attention span to develop a truly effective set of policies to neutralize this unseen foe. It is much better for his political narrative if the number one enemy can be be looters, anarchists, Antifa, thugs, and the like. These are heads he can crack (or order to be cracked). These are tangible bad guys (even if imaginary) he can depict as the most pressing threat to voters. Best of all, he can act like a law-and-order strongman and vow to crush them. And it certainly is easier to declare victory against a made-up foe than a true threat like a killer virus that keeps replicating. Trump has tried to change the channel. Coronavirus? Nothing to see. But the protesters! Mr. and Mrs. America, that's the real danger you and your families face.

As for those Americans who remain at risk due to the pandemic -- a disproportionate number of whom are within communities of color -- Trump has nothing to say to them. His own political needs come first. When Gov. Roy Cooper of North Carolina raised questions about holding a full-blown GOP convention in Charlotte in August, Trump huffed that if he could not have a large-scale event in a packed arena, then he would hold it elsewhere. "I don't want to be sitting in a place that's 50 percent empty," Trump told Cooper, a Democrat, during a phone conversation. "We can't do social distancing," Trump said on the call. Now the Republican National Committee is considering -- moving the prime-time parts of the convention to Jacksonville, Florida. Moreover, the Trump campaign announced this week that it will start staging big rallies with Trump next week. The message Trump is sending: his show is more important than the health and safety of even his own supporters.

Trump is only engaged by those political battles he can concoct and shape. And he can't do that with this pandemic. Consequently, he's just not that interested in the deaths of thousands of Americans. So Trump is putting aside those lives to pursue a course that he believes will save what he most cares about: his own political life.

David Corn is  Mother Jones ' Washington bureau chief. For more of his stories,  click here . He's also  on  Twitter  and  Facebook .  RSS  |  TWITTER  David is (more...)
Related Topic(s): American Exceptionalism; Coronavirus Pandemic; Coronavirus Task Force; Health; Killing Americans; Pandemic; Trump Bigotry; Trump Cruelty; Trump Is A Thug; Trump Racism, Add Tags
Add to My Group(s)
Go To Commenting
The views expressed herein are the sole responsibility of the author and do not necessarily reflect those of this website or its editors.