"I could stand in the middle of Fifth Ave. and shoot somebody and I wouldn't lose any voters." 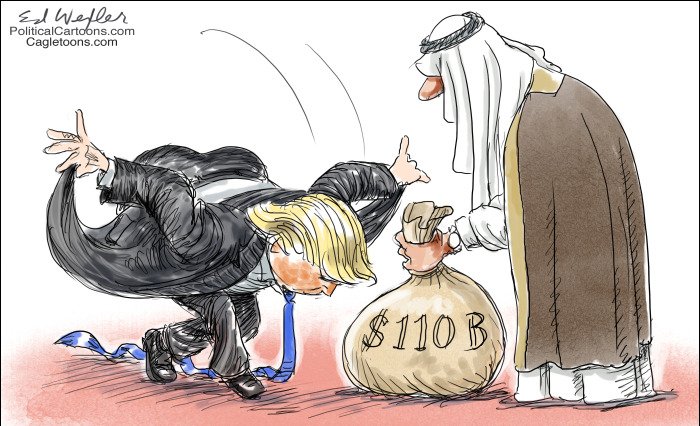 Image from Twitter User spsot
(Image by Twitter User spsot)   Details   DMCA
ding to Republican mythology, Barack Obama's relationship with Saudi Arabia was a disaster. Right-wing critics said that by allegedly bowing to King Abdullah, he was "bending over to show greater respect to Islam" and, thereby, "belittled the power and independence of the United States". In 2015, Donald Trump complained that Michelle Obama had "insulted" her Saudi Arabian hosts because she had "refused to wear a scarf." Then-candidate Chris Christie called it an "embarrassment" when Saudi Arabia pulled out of a summit scheduled for Camp David and complained that "we're not listening to them". When Obama was snubbed by King Salman on his last visit to the Kingdom, Trump said: "It's called no respect."

Eager to step off in a different direction, Donald Trump "did not bow to the Gulf leader" as he stepped off of the plane in his first trip outside a Trump property since taking his oath of office. Instead, he waited until later to present a move that started as a bow and then transitioned into a curtsy. "Fox News' foreign policy 'expert' Rebeccah Heinrichs" points out that Melania Trump "didn't cover her head", providing a "metaphor that this President is not ashamed of the United States, we do care about human rights, we do care about the women in Saudi Arabia." Replacing the snub that Obama received, Trump received a hero's welcome that played to his hyperextended ego. His face was "plastered on billboards around the city", they fed him "lavish meals" and "a five-story image of [his] face was projected on the exterior of the Ritz Carlton hotel where he'll stay". Giving the low-energy President a break, the Saudi people voluntarily spared him the inconvenience of having to deal with protesters. All Trump had to do to regain the respect of the Kingdom and out-maneuver his predecessor was to pay the small price of selling out American values.

For decades, "American officials [have] complained about the shameful state of human rights in the kingdom, where women are restricted, critics are lashed and beheadings are common." But while "Obama made human rights part of his message when he visited Saudi Arabia" and his Secretary of State, Hillary Clinton, "helped seek the release of an activist, Manal al-Sharif, who helped start a women's right-to-drive campaign", Trump took another tact stating that "we are not here to tell other people how to live, what to do, who to be, or how to worship." Like the despotic leaders of the Philippines, China, Turkey, and Egypt, Saudi leaders have been shown by the Trump administration that "topics like democracy, political reform and gender equality" have been taken off the table. Trump knows that they "push gays off...buildings...kill women and treat women horribly", but they are free to do so as long as they keep buying our weapons.

Also missing from Trump's pronouncements in Saudi Arabia was his 2014 demand that they provide us with "free oil". While Obama was willing to take on Saudi Arabia's status as a "free rider", Trump reserved that kind of talk for our democratic allies in NATO. Months into his presidency and he still has not figured out that this is not a dues-paying organization and embarrassed himself, and our country, by insisting that "many of these nations owe massive amounts of money from past years and not paying in those past years." He then compounded this embarrassment by not mentioning "any clear statement of support for Article 5, the NATO mutual-defense pledge -- something other leaders had been hoping to hear", even as he presented a remnant of the North Tower of the World Trade Center - a symbol not only of a great national tragedy but the only time in history that the Article has been invoked. Trump then proceeded to push past the Prime Minister of Montenegro to get in place for a photo shoot of the assembled heads of state. #AmericaFirst.

Back at home, Trump's fans are too busy continuing to litigate the last election to notice that their leader is quickly abandoning his promise that "the forgotten men and women of our country will be forgotten no longer." With Trumpcare, he jettisoned the promise to "keep pre-existing conditions." Moreover, the Congressional Budget Office estimates that "the bill would cause 23 million fewer people to have health insurance by 2026." While they congratulated themselves on the stroking of Trump's ego, their President released a budget that cut "Medicaid effectively in half by 2026" and "up to $64 billion over a decade from the Social Security Disability Insurance (SSDI) program". So much for the promise that there would "be no cuts to Social Security, Medicare & Medicaid." And if American Workers thought that the arms-sale agreement with Saudi Arabia was going to bring more jobs, they had better like the heat of the Saudi desert; "the agreement includes a pledge to assemble 150 Lockheed Martin Black Hawk helicopters in Saudi Arabia, a $6 billion deal that will create new 450 jobs in Saudi Arabia." How will that make America great again?

Carl Petersen is a parent and special education advocate and was a Green Party candidate in LAUSD's District 2 School Board race. He was endorsed by Network for Public Education (NPE) Action and Dr. Diane Ravitch called him a "strong supporter of public schools." His past blogs can be found at www.ChangeTheLAUSD.com.

Related Topic(s): Donald Trump Lies, Add Tags
Add to My Group(s)
Go To Commenting
The views expressed herein are the sole responsibility of the author and do not necessarily reflect those of this website or its editors.