The Confederate Battle Flag, My Southern Heritage, and the Mississippi State Flag 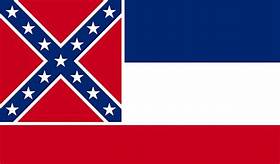 Mississippi State Flag
(Image by Jake Dima)   Details   DMCA
Everyone today knows that the Civil War was called many different things by many different people. Some referred to it as the "war between the states," or the "North against the South," and the most sad and disturbing term used was "brother fighting brother."

The reality was that the South needed to fight this war in order to preserve its way of life. The economy of the southern states could not survive without slave labor, and without it the South would fall.

The Civil War was in literally the southern states fighting against America. The Rebels were, in fact, labeled as "traitors" by their northern brothers and sisters. And to this day, there are those who believe that the South never got over the Civil War, and that is just how it is.

But somewhere along the way, the old flag, known as "The Stars and Bars," was taken out of mothballs and given a new and different meaning, at least to the white southerners who came to revere it as an important icon related to their southern heritage.

But to black Americans, that flag had a much different meaning. It was a hateful and painful reminder of the racism that existed then and still persists to this day.

My ancestors on my paternal side have lived in the deep South for hundreds of years, and in one of the most traditional southern states: Mississippi. And to this very day, the state's flag has as its most notable image, a small, but deliberate replica of the Confederate Battle Flag in one corner.

One of my ancestors from Mississippi, who fought in the Civil War, actually carried that flag into battle many times. He was actually wounded and captured at the Battle of Vicksburg, and taken to a Confederate prison at Lookout Point, Maryland, where he later died.

Today there is renewed interest in the state of Mississippi to take action to change or eliminate the Confederate portion of its state flag. Mississippi Governor Tate Reeves was recently quoted in the Washington Post as saying that the flag was adopted back in 1894, appealing to elderly Confederate soldiers, but also to white supremacists. Today many people think that the flag is a symbol of hatred.

As a frequent visitor to my dad's home state, I too, was exposed to the controversy. I remember attending my first football game at the University, or as all of the locals called it "Ole Miss," and finding myself alone in being puzzled as to why all of the people sitting in the stands, were waving tiny versions of the Confederate Battle Flag. I guess it should have been obvious to me, since the name of the team was the "Rebels."

Today though in Mississippi, The Baptist Convention has agreed with others and said that the flag is "Un-Christian." And the largest retailer in the state, Wal Mart, wants the flag changed also, according to a recent report in the Washington Post.

Recent demographics show that 38% of the population in Mississippi is black. And today there are Pro-Sports teams who are threatening not to play in the state, unless the flag is changed.

The topic of changing the state flag has come up before, and when it did, 60 % of those who voted, wanted to keep the flag as it was, the Washington Post reported in a June 26, 2020 article. Governor Tate Reeves has announced that if the state legislature puts a bill on his desk regarding the changing of the flag, he will sign it. The members of the state House and Senate want the legislators to be the ones to enact the changes to the flag this time around.

With all of the racial turmoil, and wanted and needed changes in Police Departments across the country, as well as the strength of the "Black Lives Matter" organization and its exponential growth well beyond skin-color boundaries, today may be the right day to make a change.

Related Topic(s): Confederate Flag; Confederate States Of America; Flags; Future; History; Police; Racism; South; Southern Baptist Convention, Add Tags
Add to My Group(s)
Go To Commenting
The views expressed herein are the sole responsibility of the author and do not necessarily reflect those of this website or its editors.