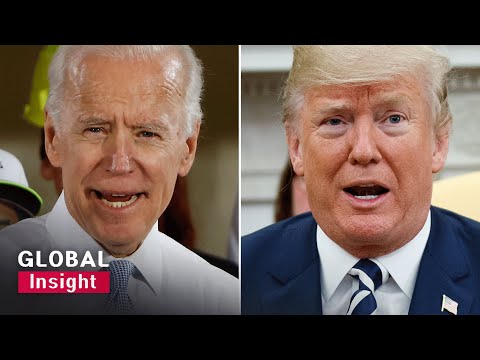 Biden vs. Trump: Who will win in November?
(Image by YouTube, Channel: ARIRANG NEWS)   Details   DMCA

American auto racing has developed a technique for creating close races. If there is any kind of damage whatsoever to one of the cars, they put out the yellow flag, slow all the cars down, and bunch all the cars together until the track is cleaned up and the racing can be restarted.

The race organizers say this is for safety reasons and, to a limited extent, it is indeed somewhat safer. What the race organizers don't say is that once the cars are bunched together and the race restarted, the situation becomes quite a bit more dangerous due to the cars being much closer together. So why do it?

Close races tend to be more compelling, particularly as they approach the finish, and more likely to keep audiences riveted to the coverage. For bottom-line-driven broadcasting, riveting coverage is more profitable than coverage of an event whose outcome appears to be a foregone conclusion.

Would US media really shift their coverage to create the perception that the race is getting closer as election day approaches? Yes, they would, and if past is prologue they are going to do just that. Al Gore in 2000 and Hillary Clinton in 2016 both watched big leads evaporate into horse races at the finish line fueled by media-driven calamities, only to lose to rivals without majorities.

The amount of revenue generated by presidential election coverage dwarfs the money generated by an individual sporting event. If it's a "toss-up heading to the finish line" and "the fate of the nation hangs in the balance," the revenue generated will be exponentially greater than a race that appears to have been decided weeks or months in advance.

So what's the harm? After all, close elections generate vigorous debate, and that's good for the political discourse, isn't it? There are two very serious problems with that approach. One, US media tampering with the election process is no better or more acceptable than interference by a foreign government. It just replaces one motive with another, a profit motive instead of a global strategic advantage. But it is still tampering, nonetheless.

The other reason is embodied in the old adage, elections have consequences. The consequences of the minority presidencies of George W. Bush and Donald Trump have been literally catastrophic for the country on a myriad of levels. It will take generations to undo the harm of those two horse races that ended up with the wrong horse, the horse without the majority in the White House.

Time to demand that Russia, China, CNN, and MSNBC all stop tampering with American elections.

Related Topic(s): Presidential Debates; Presidential Election 2020, Add Tags
Add to My Group(s)
Go To Commenting
The views expressed herein are the sole responsibility of the author and do not necessarily reflect those of this website or its editors.