We must use this moment as crucial leverage to push the planet in a new direction. If we succeed, then we have risen to the greatest crisis humans have ever faced and shown that the big brain was a useful evolutionary adaptation. 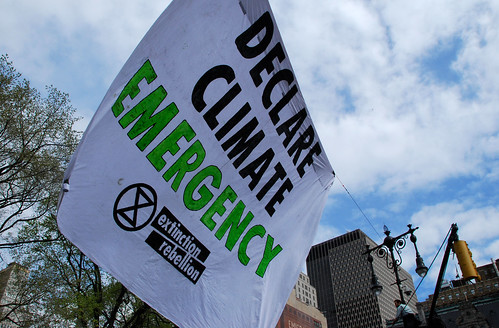 What Is the Climate Movement's State of Play?

I came to climate activism gradually. In 1989, when my book The End of Nature was published, it was the first book on global warming for a general audience. For the next 15, I worked mainly as a writer and speaker. That's because I was analyzing the problem incorrectly. In my estimation, we were arguing about the science of climate change. Is it real? How bad is it? How bad will it become? Being a writer, and an academic, I thought the right response seemed clear: shed light on the issue through more books, more articles, and more symposia.

At a certain point, though, I began to realize that we weren't engaged in an argument at all. The scientific debate had already been settled by about 1995, with the first major Intergovernmental Panel on Climate Change (IPCC) report. The scientific community had reached a clear consensus, yet governments did not take action to reduce greenhouse gas emissions. We were in a fight, not a discourse. Like most fights, it was about power and money. Another book or symposium was unlikely to move the needle.

On the other side of the fight stood the fossil fuel industry, with the richest -- and hence most politically powerful -- enterprises in human history. We weren't going to match them dollar for dollar, or even penny for dollar. History indicates that in such unequal situations, the only option is to build a movement large enough to provide a countervailing force. It has happened before, such as with the movements for women's suffrage, civil rights, and, most recently, marriage equality. Those were all hard fought, but a climate movement is harder because no one has made trillions of dollars being a bigot, but people do make trillions selling coal, oil and gas.

My expanded understanding prompted me to found 350.org, which initially consisted of myself and seven undergraduates. The biggest problem with climate change was that it seemed so large -- and we seemed so small next to it. It was hard to feel hope and easy to walk away. Nevertheless, each student took one of the seven continents, and we set out to organize. All over the world, we found people who wanted to act. Our first task was to show that there was a large constituency for action. So, in our first big action in 2008, we managed to coordinate 5,100 simultaneous demonstrations in 181 countries, which CNN called the most widespread day of political action in the planet's history.

We've gone on to organize about 20,000 such rallies, in every country but North Korea. 350.org is still, I believe, the largest group that works solely on climate change, with a not-so-large staff of 120 spread around the world. On the ground, we have found a huge if diffuse movement, made up mostly of indigenous and other front-line communities bearing the brunt of the fossil fuel industry. Much of our work is thus focused on coordinating the multitude of worthy efforts already underway.

Given the urgency of the climate crisis, we also quickly saw the need to move beyond education to confrontation -- hence, in the US, the birth of the continent-wide Keystone pipeline fight. There was already a movement in place in the tar sands of Alberta and on the prairies of Nebraska through which the proposed pipeline would pass. But we nationalized the movement, with demonstrations in DC and pressure on President Barack Obama. So far, the pipeline remains unbuilt. Every project like this around the world (e.g., fracking wells, coal ports, LNG terminals) is a target for opposition. We may not always win, but we always make life harder for the industry.

On another front, we realized that, to be successful, we needed to systematically confront the instruments used to sustain the dominance of fossil fuels. Thus, we launched the divestment movement in 2012 with the goal of reducing the financing for and, more importantly, social acceptance of the extraction of fossil fuels. It has grown much faster than we expected, and it is now the largest anti-corporate campaign of its kind in history, with commitments from endowments and other portfolios worth about $8 trillion. Goldman Sachs said recently that the campaign is the main contributor to driving the prices of coal shares down 60 percent, and Shell said it had become a "material risk" to its business.

In retrospect, I think the most important development in this movement has been the strong emergence of a "climate justice" focus, uniting the climate fight with the broader fight for human rights and dignity. There are so many great leaders now leading the struggle that I don't want to list any for fear of leaving many out. But for the last five years, my job has been to move into the background as much as possible, seeking to highlight the work of others.

Looking ahead, the biggest challenge facing the movement remains the strength of the opposition. With unlimited cash, it has managed to dominate politics, especially in the US. The Koch Brothers are two of the biggest political donors, as well as the biggest oil and gas barons and biggest leaseholders in the tar sands. Give them, and the larger industry, credit: they have managed to make US the only country on earth not taking part in the Paris Agreement, abandoning the international coordination of emission reductions. They even got the US to backtrack on something as obvious and simple as automobile fuel efficiency standards.

I do think that, in the long run, they will lose. The science gets stronger with each passing week, and every hurricane and fire makes the issue more salient -- and more urgent -- for more people. The newest polling shows that climate is much higher on the list of items that Americans worry about and vote on than it used to be, and that trend will continue given the inexorable impacts of our changing climate.

Seventy-five years from now, we will run the world on sun and wind because they're free. These new technologies, whose prices have plummeted in the last decade, excite everyone. Polling shows that the political left, right, and center all love photovoltaics.

Bill McKibben is the author of a dozen books, including The End of Nature and Deep Economy: The Wealth of Communities and the Durable Future. A former staff writer for The New Yorker, he writes regularly for Harper's, The Atlantic Monthly, and The (more...)
Related Topic(s): 350org; Billionaires; Climate Change; Climate Crisis; Green; Inequality; Progress, Add Tags
Add to My Group(s)
Go To Commenting
The views expressed herein are the sole responsibility of the author and do not necessarily reflect those of this website or its editors.