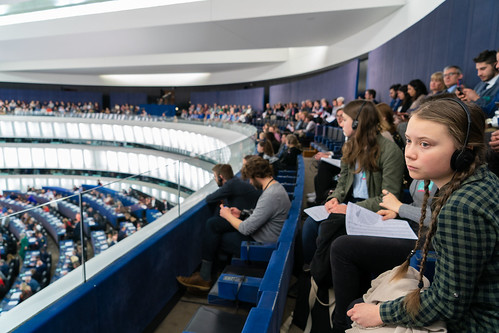 No one could fail to be touched by the fear (for the future) and urgency in Greta Thunberg's young voice as she broke down while addressing world leaders on the last day of the UN Climate Summit. The IPCC (Intergovernmental Panel on Climate Change) Special Report on the oceans showed a worse prognosis, the patient is clearly worse.

Sad to say, despite all Greta's efforts, nothing happened -- no commitment by any of the major polluters. Trump sauntered by before going on to mock her in his address -- a grown man bullying a 16-year old girl!

UN Secretary General Antonio Guterres wanted a commitment to the higher ambition of limiting global warming to 1.5C instead of 2C. He got excuses, and of course no promise of net zero by 2050 from any major polluter. Net zero implies balancing carbon emissions with carbon removal. He also wanted a commitment to no new coal plants beyond 2020. Instead China, India and Turkey will be shamelessly expanding coal power well beyond that date.

China wanted the developed nations to take the lead due to their long history of emissions and consequent responsibility. It refused to make concrete commitments unless the US and EU did so. The EU blames Poland, a coal exporter; the US has Mr. Trump. In the end none of the major polluters (China, India, EU, US) did although 80 other countries pledged to reach net zero by 2050.

Included in the 80 who pledged were 47 least developed countries (LDCs) although they are the least responsible for the emissions. They have also been victimized by past colonialism, slavery, and for many the IMF's notorious structural adjustment programs.

The climate data from the World Meteorological Organization (WMO) presented at the summit is sobering: Global temperatures are up 1.1C since 1850 of which a 0.2C (or near 20 percent) rise occurred from 2011 to 2015. The five-year period from 2014 to 2019 is the hottest on record while carbon emissions over the same period are up 20 percent from the previous five years. Sea level rise since 2014 has averaged 5mm annually while the 10-year average up to 2016 was only 4mm.

One consequence of the sea level rise and warmer temperatures has been the human catastrophe from the unprecedented storms in Mozambique and the Bahamas recently.

Ninety percent of the excess heat from climate change is absorbed by water, and the WMO recorded the highest ocean heat content on record in 2018. It poses a special danger for the Greenland ice sheet and the Arctic. New research (July 2019) also finds melt under the water surface from glaciers reaching the sea and icebergs is 'orders of magnitude' greater than previously believed. It threatens a dramatic sea level rise by the end of the century.

Arshad M Khan is a former Professor. Educated at King's College London, Oklahoma State University and the University of Chicago, he has a multidisciplinary background that has frequently informed his research. He was elected a Fellow of the (more...)
Related Topic(s): Climate Change; Climate Change Protest Activism; Climate Gap, Add Tags
Add to My Group(s)
Go To Commenting
The views expressed herein are the sole responsibility of the author and do not necessarily reflect those of this website or its editors.