Then We'll Be The Only Compassionate Beings On Earth! 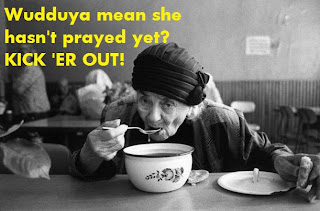 - David French (American Center for Law and Justice) on Wallbuilders, 9/20

The Christian Right has finally been forced to say that the poor don't feel they need the church. Instead, they believe they need the government. The reasoning behind this is (supposedly) that the church was the ONLY compassionate entity to turn to, but the government's handouts have made people irreligious:

Rick Green  [wallbuilders] : Doesn't it make them more dependent on government, which makes them less likely to come to the church that used to be the epicenter of the community where people would come and meet?

Epicenter. Unfortunately, the word is used more to describe the core of an earthquake or other natural disaster. Maybe a Freudian slip, however: the idea that people wanted to wrest themselves from the influence of the church never seems to enter their mind. Pseudo-historian David Barton, for example,  would never give people the impression that the Founding Fathers hated the Church of England as well as King George.

So there you have it: the poor are poor because they've sinned. The government has coddled the poor and taken them away from the church. We've heard it before, but not in such an outlandish venue. And the solution for this terrible situation is to strip the government of all its services and programs so that the only programs the poor can avail themselves will be "faith-based."
Only the Church can dole out compassion. Period.
Keep em' poor, so then they'll come to Jesus. The proposal smacks of the old soup kitchens where homeless were literally forced to hear sermons if they wanted to eat: just a stretch from "Here's a bowl of soup, but say 'Jesus Saves' before you get it!"
Legislating Compassion
It never ceases to amaze me that some people don't consider government welfare programs as a form of legislated compassion. A good government sees to the welfare of ALL its citizens, making sure that they have adequate food, shelter, clothing, and medical supplies. A GREAT government provides additional programs for people to help better themselves in the form of education and living assistance.
The Great Depression brought to an end an era of unbridled growth - and unbridled greed. FDR's New Deal meant a new beginning for national compassion - legislated compassion - simply because Hoover's laissez faire (Republican/corporate) administration was still too greedy to consider the poor and unemployed. Some churches tried to rise to the occasion in providing soup kitchens and the like, but they depended upon donations from the rich. Secular organizations started cropping up, but they were no match for a 20% rate of unemployment. It was up the government to see that more people survived.
Religious GOOD, Secular BAD
Of course, the above smacks of (GASP!) socialism, or worse ...

All that believed were together, and had all things in common; And sold their possessions and goods, and parted them to all men, as every man had need.
(Acts 2:44-45)

That's a passage of the New Testament very few preachers ever allude to nowadays. They never point to its rather limited compassion* simply because that kind of compassion was explicitly communistic ... and secular: it was not based upon the religion per se, but upon the religious community. Jesus had set down no law stating that his followers must share everything. He spoke of unequivocal compassion, but only as a tenet for all humanity.
Today's righteously arrogant realize that America's government has usurped the position (or rather the image) held by the "all-benevolent" church and they want that image back. They want "It's the Christian Thing To Do" to again mean that "only Christians are capable of doing good."
They can't stand the "compassion competition." They seem to long for the days of Medieval religious feudalism, where every poor, uneducated peasant was totally dependent upon the church for survival. A very (admittedly) cynical view of the strategy for control would be: "Keep 'em poor, keep 'em stupid." But when certain groups want to eradicate government programs that benefit the poor, it makes you wonder.
And not only must the government be eradicated from the poor's welfare, secular organizations funded by the government must be eradicated as well. Of course, tell that to the American Red Cross and to the millions of people it has helped throughout the years. Or to the United Way. Or the March of Dimes. Or to smaller agencies like the AIDS Emergency Fund.
Yes, the Right's strategic war on the government does make you wonder. Then again, as Rick Warren says:
WHATEVER IT TAKES.

*limited, it seems to only those within the believing community.

Rev. Dan Vojir is has been writing/blogging on religion and politics for the better part of ten years. A former radio talk show host (Strictly Books " Talk America Radio Network) and book publisher, Dan has connected with some of the most (more...)
Related Topic(s): American Center For Law And Justice; Christian Right; Christian-only; Christian-taliban; Compassion; Family Research Council; Poverty; Tony Perkins, Add Tags
Add to My Group(s)
Go To Commenting
The views expressed herein are the sole responsibility of the author and do not necessarily reflect those of this website or its editors.