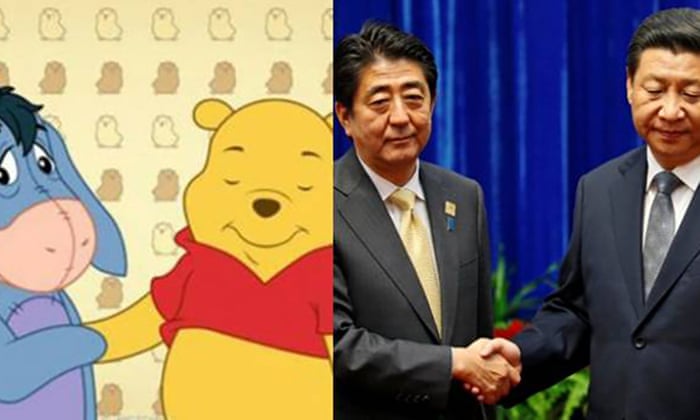 Winnie the Who
(Image by not applicable)   Details   DMCA

The permanent leader of China was compared to Winnie The Pooh and The movie was subsequently banned. In fact the comparison is quite funny and laughably accurate. https://www.theguardian.com/world/2018/aug/07/china-bans-winnie-the-pooh-film-to-stop-comparisons-to-president-xi

This first month of 2019 the oligarchical leader of China began moving toward making it illegal to disrespect the National Anthem of China in Hong Kong. China made it mandatory to respect the national anthem, and you must know the name of the National anthem to really savor the joke. The National anthem is called March of The Volunteers! https://www.pri.org/stories/2019-01-23/hong-kong-insulting-china-s-national-anthem-could-soon-be-illegal

Arise, ye who refuse to be slaves!

With our flesh and blood, let us build a new Great Wall!

As China faces its greatest peril

From each one the urgent call to action comes forth.

Millions of but one heart

Braving the enemies' fire! March on!

Braving the enemies' fire! March on!

March on! March, march on!

If you take a look at the Wikipedia history of The Chinese National Anthem it is a history of propaganda and societal steering the likes of which has probably not been encapsulated in a simple tune in modernity so revelatory of abject oligarchy, propaganda and mind control. I say that for they've had seven national anthems since 1911, each of which has a unique flavor of cultural control. Oh how governments love inspiring volunteering to brave the enemies fire. https://en.wikipedia.org/wiki/March_of_the_Volunteers

The news of Winnie The Pooh, the plan of the permanent Leader of China to make it mandatory to respect the anthem about volunteerism comes along with the announcement by Chinese scientists that they have successfully cloned monkeys. At least science is"wait, and the Chinese scientists have genetically modified the monkeys to be mentally handicapped. https://www.telegraph.co.uk/science/2019/01/24/cloned-monkeys-gene-edited-mental-illness-prompts-criticism/

Combine this with mandatory volunteerism, the elimination of quality concepts such as Winnie The Pooh due to its offending the great leader, and the creation of mentally handicapped monkeys contrary to Daoism and everything the wonderful philosophies of China teache, in what is the most Orwellian state in history and you have the social and scientific potential for one serious happy go lucky slave society of Brave New World proportions and steep Orwellian oligarchical slant.

The Orwellian Chinese state volunteered all of Tibet, regularly disappears spiritual and religious individuals assumedly for volunteerism, and is said to be holding over a million people for what essentially amounts to Thoughtcrime. https://www.rfa.org/english/news/china/believers-12122018120836.html

The Chinese oligarchical collectivism is only enhanced recently by its Orwellian morality programming when it implemented a reward and punishment social system with points based on your acceptability. This comes too as the state is implementing 5G with potential for total information control nationally, and enhancement of international spying tools. https://www.businessinsider.com/china-social-credit-system-punishments-and-rewards-explained-2018-4