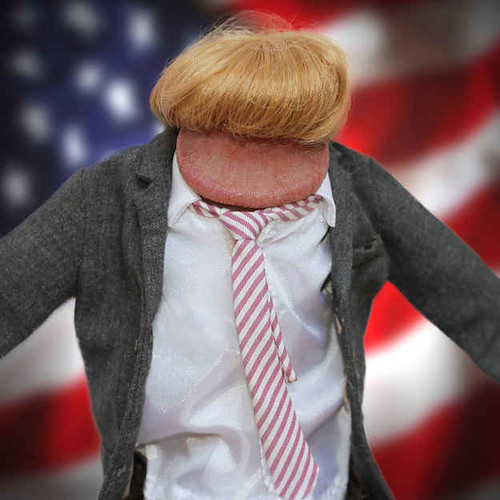 Make America Great Again. Trump's campaign slogan was a direct appeal to nationalism. As a son of the Rust Belt city of Dayton, Ohio, I wasn't surprised to see that it worked.

People in the postindustrial Midwest and in much of the rest of flyover country are tired of being ignored by the urban coastal elites who seem to think laid-off factory workers should shake off their blues and get a job as a coder. Not that the children of the dispossessed stand a better chance: Silicon Valley is a great wealth generator but a lousy job creator. Many highly skilled American tech workers are unemployed, cheated out of jobs by sleazy companies who abuse the H1B visa program to hire compliant foreigners for a fraction of the cost.

If you're one of the millions of left-leaning Americans shocked and awed at Donald Trump's first week as president, his "America First" inauguration speech, his orders to build his Mexican border wall, tear up NAFTA, start a trade war, and especially the sudden brutalism of his Muslim travel ban, I have news for you: there are just as many others who are cheering him on, thrilled that he's keeping his campaign promises. As far as they're concerned, the rest of the world -- including refugees from countries whose wars were started by the U.S. -- can go to hell.

After all, their hometowns already have.

As Sabrina Tavernise recently wrote in The New York Times, victims of economic decline and their attendant societal ills -- depression, alcoholism, the meth and opioid epidemics -- revolted in the 2016 election against elites "who lived in isolated islands of economic opportunity and sneered at people who didn't." She cited NYU social psychologist Jonathan Haidt, who sees a clash between globalists and nationalists. "The globalists, who tend to be urban and college-educated, want a world like the one described in John Lennon's song 'Imagine' -- no religion, walls or borders dividing people. The nationalists see that as a vision of hell...They also want to limit immigration, an instinct that globalists are often too quick to condemn as racist."

Globalism dominates economic policy-making in the Democratic Party. Beginning with the takeover of the party by the Clintons' Democratic Leadership Council in the early 1990s, Democrats have pushed through free trade agreements like NAFTA and CAFTA, and the creation of the World Trade Organization. This has not come without consequences: Globalization eroded the power of Big Labor, formerly a major source of income and manpower for the party. It also turned off people in Ohio and Michigan and Illinois and Pennsylvania -- those who lost their own jobs, as well as their friends, families and neighbors.

Democratic politicians have been so blind to the suffering all around that they never even once proposed a bill that would have helped victims of outsourcing with money or job retraining. Some even publicly praised the fact that wages were going up in places like Mexico! Trump gave long-seething Americans an outlet for their rage.

The globalist left vs. nationalist right paradigm, however, is a recent thing. In fact, the right part of that equation only dates back to last summer; pre-Trump, exporting American jobs via trade deals was a point of bipartisan consensus.

The short history of Democratic globalism suggests that one way back from defeat and political irrelevance, both for the party and for the broader Left, is to make the case for a leftist nationalism.

Until the 1970s, Republicans promoted free trade agreements. Democrats opposed them. Protecting workers, especially the highly-paid blue-collar laborers, from foreign competition, kept union donations pouring into party coffers. But then party fundraisers found Wall Street. Big finance craves freedom of movement for capital so business owners can find the cheapest raw materials, supplies and workers in the world -- and a broken, dispirited workforce unable to organize and bargain collectively. Wall Street told the Democrats: dump your other girlfriend. You can't have us as well as big labor. Workers have gotten ground up under the bus ever since.

The grassroots campaign of Bernie Sanders -- and of Donald Trump, whose fundraising tactics and social media-driven campaign emulated Sanders' down to the fonts and spacing of his email solicitations -- have broken big corporate donors' hold on campaign financing. Meanwhile, look what happened to Hillary Clinton ("My dream is a hemispheric common market, with open trade and open borders") and her base of corporate and wealthy individual backers. Nationalism, not globalism, is the future of American politics -- but right now, it's only the right that's riding the wave.

Though patriotism is the last refuge of the scoundrel and the first of the nativist, history shows us a long and honorable record of left-wing nationalism. The Chinese civil war turned in favor of the Communists over Chiang Kai-Shek's Nationalists after Mao Tse-Tung directed his cadres to lead the patriotic resistance against Japanese occupation. Most members of the French Resistance against the Nazis were communist. Fidel Castro was an ardent patriot/nationalist; so was Ho Chi Minh. These leftists understood that the oppression of workers by the ruling class often manifests itself via forms of globalization: invasions, colonialism, the establishment of puppet states via imperialism. It is not necessary to succumb to the dark forces of bigotry, or to deny refuge to victims of war as Trump did last week, to stand up for the citizens of your own country against those who would exploit or abuse them.

There's nothing wrong with imagining a world without borders. It's good for Americans, and for decency, when wages of workers in other nations increase -- there are fewer wars and more consumers. As things stand today, however, nation-states are here to stay. In fact, there are more of them than ever before.

Is it really so unreasonable for American workers to expect the leftists who claim to care about them, to fight for them to earn higher wages? A left unable to appeal to nationalism has no future.

Related Topic(s): Jobs; Nationalism; Trade; Workers, Add Tags
Add to My Group(s)
Go To Commenting
The views expressed herein are the sole responsibility of the author and do not necessarily reflect those of this website or its editors.