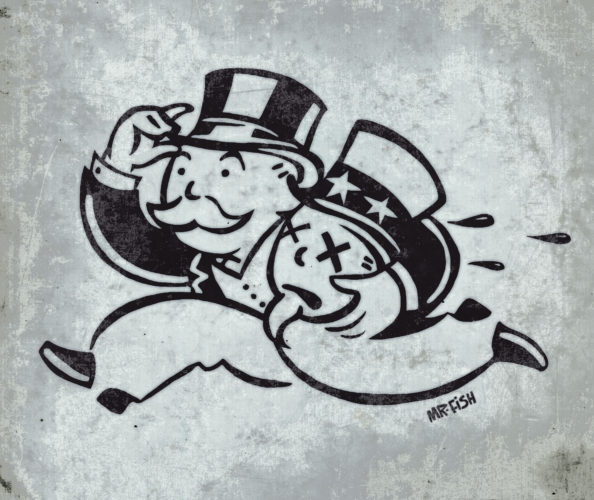 Capitalists seek to maximize profits and reduce the cost of labor. This sums up capitalism at its core. It is defined by these immutable objectives. It is not about democracy. It is not, as has been claimed, about wealth creation for the working class. It has nothing to do with freedom. Those capitalists, especially in corporations, who are not able to increase profits and decrease the cost of labor, through layoffs, cutting wages, destroying unions, offshoring, outsourcing or automating jobs, are replaced. Personal ethics are irrelevant. Capitalists are about acquisition and exploitation.

Capitalists go to absurd lengths to lie about capitalism's true nature. It is why Business Roundtable's most recent version of its Principles of Corporate Governance, signed by 181 major CEOs -- including the heads of Amazon, General Motors and Chevron, all three of which paid no federal income tax in 2018 -- rivals the doublespeak of the worst totalitarian regimes of the 20th century.

If maximizing profit means turning the oceans into dead zones, filling the atmosphere with carbon emissions and toxins that render the climate unfit for humans, pumping chemicals and waste into the soil, water, air and food supply that ensure that cancer is an epidemic, buying off elected officials and judges to serve the exclusive interests of capital and privatizing social services, including health care, transportation, education and public utilities, to gouge the public, that is the price of business.

If reducing the cost of labor means forcing workers to remain unorganized and abolishing work, health and safety regulations, if it means moving industry overseas where foreign workers toil like 19th-century serfs, if it means suppressing wages at home to force an impoverished population into debt peonage, that is the price of business.

It is not accidental that the United States now has the worst income inequality since the 1920s. This was engineered by the capitalist class. But what Business Roundtable's Aug. 19 statement reveals is that the capitalists are frightened they have been found out. Capitalism free of external restraints and with no internal restraints will pillage and exploit a captive population until it rises up in fury. It is such an eruption that today's capitalists worry is on the horizon.

Capitalism, because it is such a socially destructive force, saturates the media landscape with advertising to misinform and manipulate the public. It uses its vast wealth to buy up the press, domesticate universities, nonprofits and think tanks and demonize and muzzle its critics. It funds pseudo-intellectuals and pseudo-economists who tirelessly propagate the ideology of neoliberalism, the belief that transferring wealth upward into the hands of the ruling oligarchs is beneficial to society. It forms global monopolies that prey on the public. It wages endless wars in its quest for profit. It equates anti-capitalist agitation with terrorism, meaning, for example, that anyone in the U.S. who attempts to photograph or film the savagery and cruelty of industrial agriculture -- one of the primary causes of carbon emissions -- can be charged under terrorism acts. And when its pyramid schemes, frauds and financial bubbles collapse, it loots the national treasury and leaves taxpayers with the bill. (In the U.S. economic crisis of 2008, corporations gobbled up $4.6 trillion in public money.)

Jamie Dimon, chairman and CEO of JPMorgan Chase and chairman of Business Roundtable, conceded in the press release containing the "Statement on the Purpose of a Corporation" that "the American dream is alive, but fraying." He assured us, however, that "major employers are investing in their workers and communities because they know it is the only way to be successful over the long term. These modernized principles reflect the business community's unwavering commitment to continue to push for an economy that serves all Americans."

Alex Gorsky, chairman of the board and chief executive officer of Johnson & Johnson and chair of the Business Roundtable Corporate Governance Committee, added that the statement "affirms the essential role corporations can play in improving our society."

Darren Walker, the president of the Ford Foundation, called the statement "tremendous news" and said it would "result in shared prosperity and sustainability for both business and society."

The sententious and self-congratulatory passages in the statement can be summed up by the opening paragraphs:

"Americans deserve an economy that allows each person to succeed through hard work and creativity and to lead a life of meaning and dignity. We believe the free-market system is the best means of generating good jobs, a strong and sustainable economy, innovation, a healthy environment and economic opportunity for all.

Capitalists such as Dimon (net worth $1.4 billion), whose company has paid more in regulatory fines than any other in America, and Gorsky, whose corporation was charged with helping fuel Oklahoma's opioid crisis and then ordered by a court to pay $572 million in restitution in that state, would, in a functioning democracy, be in prison. Johnson & Johnson, Purdue Pharma, Pfizer and McKesson together are responsible for the deaths of many thousands of Americans -- more than 130 people died every day in the U.S. from opioid-related drug overdoses in 2016 and 2017, according to the federal government.

Related Topic(s): Capitalism; Corporate; Corporations; Economy; Greed; Jobs; Power, Add Tags
Add to My Group(s)
Go To Commenting
The views expressed herein are the sole responsibility of the author and do not necessarily reflect those of this website or its editors.