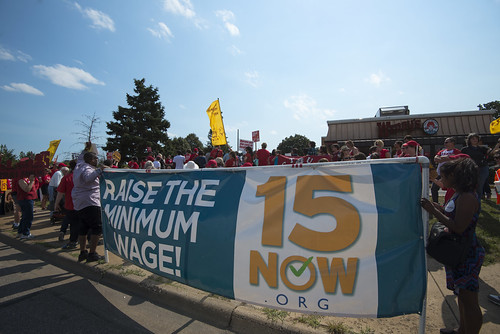 Yes, the Senate parliamentarian ruled that including a $15 minimum wage in the relief package would not pass the budget reconciliation Byrd act, as Democrats have planned.

So, Joe Biden has put on his centrist corporatist hat and is claiming defeat. CNN and MSNBC (like Chuck Todd) and the other MSM are claiming defeat, saying that the lefty Democrats have lost the $15 dollar an hour cause.

"Despite a Senate official's roadblock, the VP can clear a path to fulfill Dems' $15 minimum wage promise, according to a blueprint circulating on Capitol Hill."

Basically, here's how it works. The VP Harris, as Senate Chair would simply have to appeal the parliamentarian's ruling in a Senate vote. To reject the appeal, 60 senators must vote to reject the appeal. That would require ten Democrats to turn against the $15 minimum wage. That's not going to happen. It seems simple. The Daily Poster article describes how there is clear precedent for this move, that it's been done in the past. But so far, it looks like Joe Biden is going to screw the progressives who have worked so hard on this. Daily Poster reports,

"In an MSNBC interview on Wednesday, Klain said that if the parliamentarian advises Democrats against including the minimum wage hike, the White House will not want Democrats to move ahead with it. If Harris refuses to use her power, that decision could leave workers who are paid poverty wages and toiling in hazardous conditions during the pandemic to wait indefinitely for better pay.

"Not sure if it's ever happened in the past," Klain said when asked if Harris will ignore the parliamentarian. "Certainly that's not something we would do. We're going to honor the rules of the system and work within that system to get this bill passed."

What makes this even more disgusting is that in the same interview Klain described the Biden administration's position on fake progressive, anti-Sanders attack dog Neera Tanden, ""We're fighting our guts out to get her confirmed."

Right. Fight your guts out for a centrist Hillary shill, but use a lame excuse not to help the tens of millions of people who voted for Democrats because they trusted them to "fight their guts out" to pass the $15 dollar minimum wage.

Come 2022 mid-term elections, when the party that won the White House often loses and certainly is at great risk, voters will look at the Democrats and decide that they did their usual no balls, spineless, gutless move and did nothing. It doesn't have to be that way.

"MacDonough's ruling could possibly be overruled by Vice President Kamala Harris, but it's unclear if Harris will do so. If she doesn't, Democrats will have to introduce a minimum wage hike as its own standalone Senate bill. Rulings by the parliamentarian are advisory, though the vice president can overrule the parliamentarian's advice.

So the question is, will Biden fall back to Obama's long history of 'Can't-do-ism?'

Even if Biden and Klain say that they are accepting the parliamentarian's decision, Kamala Harris doesn't have to. She could show that she has a lot more balls than Biden and support the $15 minimum wage by exercising her right to appeal. That might piss of Joe Biden and Ron Klain, but then again, they might be playing good cop bad cop and, damn, it will sure make her look strong if she stands up to Biden on this-- since it's a move, which if it flies, will strongly help Democrats.

So, it's really a matter of either guts or theater. But the idea that the $15 minimum wage is dead is pure total BS-- a lie that it is being contemptibly amplified by the MSM.

Now is the time to call Biden's BS and shout out loud for Harris to have the guts to appeal the Senate parliamentarian's $15 minimum wage decision. If WallStreetBets Redditors can take on the big hedge funds with their Game Stop plays, the people who believe in the $15 minimum wage should be able to put enough pressure on the Biden Administration to follow through on promises.

Related Topic(s): Corona Virus Covid 19 Relief Funding; Minimum Wage Living Wage; Parliamentarian, Add Tags
Add to My Group(s)
Go To Commenting
The views expressed herein are the sole responsibility of the author and do not necessarily reflect those of this website or its editors.