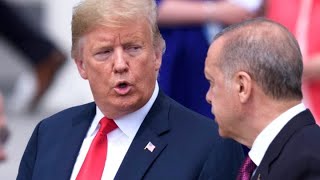 Trump's inviting of Turkey's President Erdogan to Washington comes at a peculiar time when the House of Representatives is pursuing the impeachment inquiry against Trump and when Erdogan is preoccupied with his invasion of Syria and the growing frustration of the Turkish public with his ruthless domestic and adventurous foreign policy. The question is, what message will Erdogan's visit send to both the US' friends and foes?

Our adversaries will bask in the notion that the US is no longer guided by any moral principles. Inviting Erdogan to Washington, when Kurdish blood is still fresh on his hands, only confirms that Trump has no scruples and that under his leadership, today's friends may well become the enemies of tomorrow. Our friends, on the other hand, are bewildered as to why the US would accord a formal visit to the White House to a brutal leader such as Erdogan, who has committed gross human rights violations against his own people and in particular against both Turkish and Syrian Kurds.

Speculation about what might come out of Trump and Erdogan's meeting abounds, but mine is that nothing of substance will emerge from their face-to-face encounter other than each trying to reap some personal gains. Indeed, Trump is solely for Trump, and Erdogan's narcissism is surpassed only by Trump's inflated ego and pathetic self-indulgence.

Erdogan's eagerness to visit the White House is motivated by a number of "sober" considerations: for Erdogan, the visit demonstrates to his own public that he enjoys the support of the US while showing off that he is a world leader upon whom even the US would accord the status and respect that other prominent heads of states deserve, such Germany's Merkel and France's Macron.

Moreover, the visit will embolden Erdogan to continue his rampage against his own Kurds and displays a lack of concern by the US about his gross human rights violations. The visit will further demonstrate that the US is conceding to Erdogan's growing friendly relations with Russia and forgetting altogether Ankara's purchase of the Russian S-400 air defense system, even though it severely compromises NATO's sensitive technology and intelligence.

Sadly and most troubling is that the visit clearly suggests that Trump is careless about Erdogan's sinister design to decimate the Syrian Kurdish opposition, the YPG, and their comrades in arms, the FSA, and maintain a permanent foothold in Syria, which will only intensify regional conflicts and instability.

For Trump, Erdogan's visit offers another stunt to distract the American public's attention from his compounding daily troubles for at least a short period of time. Given the outrage by both Republicans and Democrats following his precipitous decision to withdraw our forces from Syria, Trump wanted to demonstrate that his decision was the right one. After all, there is a ceasefire in place and US forces are protecting Syria's oil fields, which he cynically views as an advantage, regardless of the fact that hundreds of our closest allies -- the Syrian Kurds -- have already been killed by Turkish forces and tens of thousands are internally displaced.

Moreover, given that Trump is mostly a facade with no substance, he is desperately eager to demonstrate that he, in fact, is actively engaged in foreign affairs in the search for a solution to various conflicts in the Middle East, including the Turkish-Kurdish conflict. And while he is at it, he wanted to prove to his base that he is the most powerful man and leaders will come from every corner of the world to rub shoulders with him, which also satisfies his ego.

However inconsequential Erdogan's visit to the White House may be, it is worrisome in that Erdogan has succeeded in effectively sidelining the US from having much of a say about Syria's future. Syria's fate is now in the hands of Russia's Putin, Iran's Rouhani, and Erdogan himself. For all intents and purposes, Trump dumped Syria on the lap of these three leaders, whose main objective is to push the US out of the Middle East, as each wants to pursue his own agenda in the region without American intervention.

To be sure, the Turkish butcher Erdogan and the notorious liar Trump found their match, and they have no shame and no remorse about the extent they use each other to advance their interest.

The visit will end the same way it started. Nothing of any substance will come of their unceremonious meeting, as neither has anything to offer the other and would pretty much maintain their mutual disdain toward one another for as long as they remain in office.

Related Topic(s): Conflict; Lies Liars; Meeting; Recep Tayyip Erdogan; Syria; Trump, Add Tags
Add to My Group(s)
Go To Commenting
The views expressed herein are the sole responsibility of the author and do not necessarily reflect those of this website or its editors.