With the passing of George H.W. Bush, there has been a lot of talk about him and "honor." "Except for the 'Willy Horton' ad," and perhaps one or two other things here and there, folks say, he was an "honorable man." And certainly, folks say, he came from, and bequeathed to us, an honorable family. Well, in this column we'll take a look at those propositions, and readers can make up their own minds. (And let's note that lots of other observers, mainly from the Left but not entirely, have done the same things and, of course, have found the same facts.) 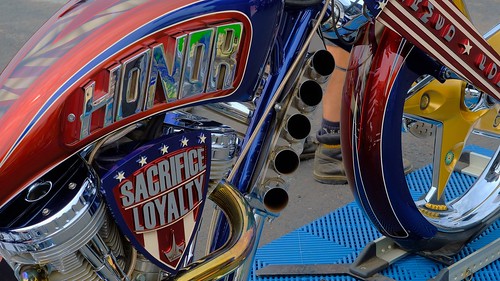 One of the early ruling class funders of the German Nazi Party was a steel magnate named Fritz Thyssen, a major player in the German steel industry. (The name still is. One of the largest German steel companies now is thyssenkrupp AG, formed by a merger of the two largest pre- and during- the War German steel companies. Neither family is involved in the company.) Thyssen early-on saw a future for the Nazi Party in dealing with the German Left which, in post-World War I Germany was powerful. In search of additional funds for it, he went abroad.

An early foreign recruit to the Nazi cause (in 1923) was a U.S. named George Herbert Walker. Sound familiar? Well, he was a GHW Bush grandfather. On the other side of GHW's lineage, his father, Prescott Bush, was a major banker for the Nazis. (The Walkers and the Bushes obviously had a lot in common, politically.) Prescott Bush was introduced into the German/Nazi banking world by guess who? Fritz Thyssen. Even after the Nazis a) re-militarized the Rhineland (1936, in violation of the Treaty of Versailles), b) engineered the Anschluss (taking over Austria in March 1938), under the Munich Agreement (Sept. 1938) seized the Czech part of Czechoslovakia, in November 1938 unleashed what the unified German government calls the "Night of the Government Pogrom" (the Nazi name for which was "Kristallnacht," the Night of the Broken Glass). Prescott Bush banked with them.

Then in March of the following year, the Nazis took the rest of Czechoslovakia. They invaded Poland in Sept, 1939 (and immediately commenced what would become the Holocaust), defeated France in 1940, engaged in the Battle of Britain later that year, invaded the Soviet Union in June, 1941, and then declared war on the United States on Dec. 8, 1941, following the Japanese attack on Pearl Harbor the day before. Prescott Bush was still at it: making money banking for the Nazis. Only when, in February, 1942 did George Bush's father receive a phone call from President Roosevelt informing him that if he did not cease and desist immediately, he would be prosecuted under the Trading with the Enemy Act, did he indeed cease and desist. In 1952, making sure that his war record (for the Nazis) remained well-hidden, Prescott Bush was elected Senator from Connecticut. Along the way, this "honorable man" fathered a son who he would name after a maternal grandfather, his co-Nazi funder, George Herbert Walker.

It should be noted that despite the fact of who his father was, GHW did serve with honor in World War II (click here) . As a naval aviator in the Pacific theatre he flew 58 missions and survived being shot down at sea.

Next, in terms of "honor," during the Viet Nam War GHW went to the then Speaker of the Texas House of Representatives, Ben Bames, seeking his help in getting a "queue skip" for his son "W." to get into the Texas Air National Guard. Such an appointment would likely help "W." escape service in Viet Nam. He got it and W. did get into the Guard, where he compiled a less-than-distinguished record. On his famous 60 Minutes segment on "W." and the Guard, Dan Rather had former Rep. Barnes on the air with this story. But then Rather went a "bridge too far" (see the British Army at Arnhem in World War II) with a story that was even juicier but much less well-sourced. And the rest as they say, is history, as was Rather's career at CBS.

John frost brug Arnhem. This is what the famous .bridge too far. looks like now.
(Image by Maarten Takens)   Details   DMCA
Skipping over GHW Bush's bloody time at the CIA, fast forward to GHW Bush's run for the Republican nomination for the Presidency against Ronald Reagan in 1980. He didn't get it, but when Reagan surprised him by offering him the Vice-Presidential slot, he jumped at it. Thing was, Reagan was already planning to be the first Republican to make a major alliance with the Christian Right. A condition for GHW to get that V-P slot was that both he and Barbara immediately resign their long-held seats on the board of Texas Planned Parenthood. For the "man of honor," that was an easy choice.

Then there is the speculation [SJ1] that GHW may have been the point man during the 1980 Presidential Campaign, along with William Casey, in arranging a deal with the Khomeini Government in Iran to delay the release of the U.S. hostages which they had been holding since 1979, until after the election, to help Reagan win it. Then, so the speculation goes, a Reagan Administration would secretly supply the Iranians with arms. There has been further speculation that Bush himself made a quick trip to Europe in October of that year to lock up that deal, during which, it has been speculated, he made a quicker trip to the Loire Valley in France to have a quickie with his long-time rumored mistress, one Jennifer Fitzgerald.

Next in terms of GHW's "honor" there is the "Willy Horton ad" of his 1988 run for President against Michael Dukakis. Much has been written about it, down to this very day. Briefly, Reagan had used racist "dog whistles" a-plenty, beginning with making the tiny village of Philadelphia, MS, where the three civil rights workers were murdered in the "Freedom Summer" of 1963, his first speech-stop after he had gained the Republican nomination at Philadelphia in 1980. The "Willy Horton ad," created by "Always Attack, Never Defend" (sound familiar) Lee Atwater (who on his death bed apologized for ever making it), is considered by many to have led the Republican Party right down the hill to the open racism of Donald J. Trump.

And then we come to the Gulf War that made GHW truly famous. In actuality, he tricked Saddam Hussein into it. In the summer of 1990, Saddam Hussein's Iraq is having a series of problems with its Southern neighbor, Kuwait. One is that Iraq's passage to the open sea is difficult, through the shallow and narrow "Shatt al' Arab." Saddam wants to lease two uninhabited Kuwaiti Islands in the Shatt, in order to build deep-water port. Kuwait says "no." Then Saddam discovers that Kuwait is "diagonal drilling" across the Iraqi border, into their oil fields. During intense diplomatic discussions to resolve both situations, with Saddam himself at the table the Kuwaiti Foreign Minister makes a veiled reference to the widely-held suspicion throughout the Middle East that Saddam's mother was a prostitute. That suspicion was likely correct, but it was hardly a subject to bring up during delicate negotiations over serious issues. Saddam stormed out of the meeting, which would be the last one before the Gulf War.

On July 25, 1990, Saddam had an exchange with the U.S. Ambassador April Glaspie about the matters at hand. She has been quoted (and later denied saying it) that: "We have no opinion on your Arab -- Arab conflicts, such as your dispute with Kuwait. Secretary (of State James) Baker has directed me to emphasize the instruction, first given to Iraq in the 1960s, that the Kuwait issue is not associated with America." Saddam invaded Kuwait on August 2, and the rest, as they say, is history. Which on this side of the Atlantic made GHW's place in the history of "strong American Presidents." Of course, if he really did, through Amb. Glaspie, trick Saddam into invading, and was ready for him, that's another story. 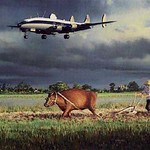 This picture has no relation to this text. I put it in because when I was young I flew several times on a Lockheed Constellation, the .Connie,. and have always thought that it was a great plane.
(Image by The National Guard)   Details   DMCA

Finally, in terms of the Bushes and "honor" there is "W.'s" two-term Presidency, with "9/11," about which to this very day there are so many unanswered questions, the War on Iraq resulting from the missing "Weapons of Mass Destruction," and so on and so forth. But since that material has been gone over many, many times, and next to Trump "W" seems to come off at least a little better (which of course is not saying much), we are going to stop here. But the next time someone talks about the Bush family and "honor," you might want to say (or at least think) "wait a minute."

Steven Jonas, MD, MPH, MS is a Professor Emeritus of Preventive Medicine at StonyBrookMedicine (NY) and author/co-author/editor/co-editor of over 35 books. In addition to his position on OpEdNews as a â€œTrusted Author,â€ he is a Senior (more...)
Related Topic(s): Agreement; Bush Admin; Bush And 911; Bush Crime Family; Bush George Herbert Walker; Bushism; Dukakis; Father; Hostages; Iraq; (more...) Nazis; Pogrom; Republican, Add Tags  (less...)
Add to My Group(s)
Go To Commenting
The views expressed herein are the sole responsibility of the author and do not necessarily reflect those of this website or its editors.