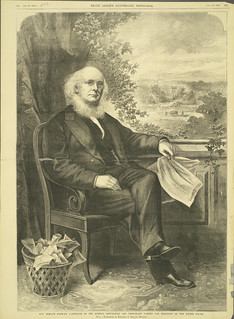 He was born into poverty in New Hampshire in 1811.

His father was a struggling farmer. His mother did most of the other chores.

He was a brilliant student, but the family often moved, looking for a better life--a couple of times so the father could avoid being put into debtor's prison.

At the age of 15, he dropped out of school and became a printer's apprentice, sending much of his wages to help his family.

For several years, he worked as an apprentice and then as a printer, his hands covered by ink, his body ingesting the chemicals of that ink.

He worked hard, saved money, helped others achieve their political dreams, became the editor of newspapers, and soon became an owner.

In the two decades leading to the Civil War, Horace Greeley had become one of the most powerful and influential men in America. His newspaper, the New York Tribune, was the nation's largest circulation newspaper.

But instead of becoming even richer, he used his newspaper as a call for social action. For social justice.

In 1848, as a congressman fulfilling the last three months of the term of an incumbent who was removed from office, Greeley introduced legislation to end flogging in the Navy, argued for a transcontinental railroad, and introduced legislation to allow citizens to purchase at a reduced price land in unsettled territories as long as they weren't speculators and promised to develop the land. The Homestead Act, which Congress finally passed 13 years later, helped the indigent, unemployed, and others to help settle the American west and Midwest. But in his three months in office he also became universally hated by almost everyone elected to Congress. The social reformer in his soul had pointed out numerous ethical and criminal abuses by members of Congress; his party didn't ask him to run for a full term.

He called for all American citizens--Blacks and women included--to be given the rights of the vote.

In 1854, Greeley became one of the founders of the Republican party. For more than two decades, he had been a strong abolitionist and now the new political party would make the end of slavery one of its founding principles. He was one of the main reasons why his friend, Abraham Lincoln, whom he helped become president, finally relented and two years after the civil war began, finally issued the Emancipation Proclamation.

Related Topic(s): Class; History; History; History Activism; Journalism; Journalists-Journalism; Labor Day; Labor-Unions; Mass Media; Union-Worker Issues-Labor; (more...) Working Poor, Add Tags  (less...)
Add to My Group(s)
Go To Commenting
The views expressed herein are the sole responsibility of the author and do not necessarily reflect those of this website or its editors.