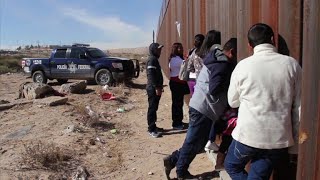 Around 50 families reunite through the border wall that separates Mexico and the US for a few minutes, in protest of US migration policies.
(Image by YouTube, Channel: AFP news agency)   Details   DMCA

Those who forget history are doomed to repeat its mistakes... blah blah blah, someone said -- Americans don't even pay attention to the news, so how the heck are they supposed to remember it after it becomes history?

So we keep making the same mistakes over and over. In foreign policy the biggest mistake the United States keeps making is interfering in the sovereign domestic politics of foreign countries it doesn't know enough about. More often than not, the U.S. supports the wrong side: a privileged minority who oppresses the people, aka the majority. Eventually, because they are the majority, the people overthrow the jerks. Unsurprisingly to everyone except the State Department, the new government is pissed at the United States.

A classic example followed the decision of the CIA to arm the mujahedin in Afghanistan against the Soviets during the 1980s. The mujahedin gave rise to Al Qaeda, who caused us some sort of trouble in 2001, though I can't remember exactly what happened there. Then there was the CIA-backed coup that ended the rule of the democratically-elected prime minister of Iran in 1953. I'd be shocked if five percent of Americans have heard of Mohammad Mossadegh, but the Iranians have and they remember and for some reason they just won't shut up about it and sometimes they give our citizens a hard time.

Blowback isn't always terrorism and it doesn't always originate in the Muslim world.

At this writing the Trump Administration's mistreatment of illegal immigrants attempting to enter the United States from Mexico has drawn international condemnation, and rightly so. The cliche' that most migrants come here to pursue economic opportunities is out of date. Nowadays much if not most of the migratory flow is comprised of refugees from violence, specifically from the so-called "Northern Triangle countries" of Central America: Honduras, El Salvador, Belize and Guatemala. Homicide rates are especially high in Honduras and El Salvador.

A 2015 Doctors Without Borders survey of refugees from these countries found that most Central Americans seeking political asylum on the southern border were fleeing physical attacks or threats of violence against themselves or a close family member. More than 40% had had a family member killed in the previous two years.

American officials blame the violence on the drug trade, and accept some responsibility by noting the U.S. demand for illegal narcotics that is behind the violence. But while drug cartels are indisputably a big part of the problem, what no one wants to talk about -- especially not Democrats who are having a field day watching the Republicans get beat up in the polls because the optics of forcibly separating children from their parents are so hideous -- is the U.S. interventionism, most recently carried out by former President Barack Obama, behind the disintegration of civil society in Central America.

Shortly after becoming president in 2009, Barack Obama and his bellicose secretary of state Hillary Clinton faced a foreign policy dilemma: what, if anything, to do about a military coup that toppled Honduras' democratically-elected president Manuel Zelaya. As Al Jazeera remembers: "Latin American leaders, the United Nations General Assembly and other international bodies vehemently demanded his immediate return to office."

The people's will be damned; the U.S. government wanted Zelaya out because he was a leftist, an ally of Venezuela's charismatic leader Hugo Cha'vez and an enemy of Honduras oligarchs, who had long been propped up by the U.S. and U.S. corporations. Zelaya's crime: he wanted to reduce the country's staggering chasm between a tiny clique of wealthy families and the rest of the population, who were desperately poor. But Obama had been elected post-Bush because he opposed the Iraq war. He couldn't be seen as backing a Cold War-style intervention in favor of Latin American thugs.

So he played a double game. In public -- after an embarrassing, telling silence -- Obama decried the coup and called for Zelaya's return to power.

Thanks to WikiLeaks we know that behind the scenes and in defiance of international law, Clinton reached out to the new junta leader to assure him of U.S. support and rejected the international community's requests that the U.S. demand Zelaya's reinstatement. The secretary of state worked hard to make certain democracy did not return to Honduras so that the new junta could remain in power.

The right-wing military junta, many of whom graduated from the Pentagon's notorious assassin-training School of the Americas, were not good stewards. "The homicide rate in Honduras, already the highest in the world, increased by 50 percent from 2008 to 2011; political repression, the murder of opposition political candidates, peasant organizers and LGBT activists increased and continue to this day. Femicides skyrocketed. The violence and insecurity were exacerbated by a generalized institutional collapse. Drug-related violence has worsened amid allegations of rampant corruption in Honduras' police and government. While the gangs are responsible for much of the violence, Honduran security forces have engaged in a wave of killings and other human rights crimes with impunity," Al Jazeera reports.

Related Topic(s): American Capitalism; American Detainees; American Facism; Border Dispute; Border Wall; Corruption; Democrats; International; Republican, Add Tags
Add to My Group(s)
Go To Commenting
The views expressed herein are the sole responsibility of the author and do not necessarily reflect those of this website or its editors.