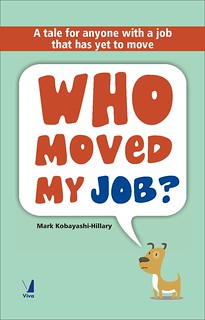 Who Moved My Job?
(Image by markhillary)   Details   DMCA
>

There's one thing that both progressives and conservatives can agree on, and they can quote both FDR and Ronald Reagan on it. And that is that, "The best welfare program is a job."

FDR extended the idea to say that when there are no jobs, the government should act as an employer of last resort. But Ronald Reagan supported the fantasy that rich people will simply create jobs out of sheer benevolence if we just cut their taxes and tear down pesky financial and trade regulations. And Ronald Reagan was right in some twisted way, by lifting trade barriers and financial regulations, the richest among us created hundreds of thousands of jobs.

There's just one problem: The jobs that got created are overseas: primarily low-wage, often-exploitative jobs in China, in Vietnam, in Malaysia and in Mexico. And all of those jobs came at the expense of someone else's job, right here at home.

Back in 1998, Nike Chairman Phil Knight explained all the wonderful benefits of "international trade" in a speech at New Mexico State University.

He said, "During the 1990s, all our experiences have caused us to really believe in the benefits of international trade. The uplifting of impoverished people, the better values for consumers in industrialized nations, and most of all, the increased understandings between peoples of different cultures."

Which sounds great, if you can look at so-called "free trade" through the rose-tinted glasses of an executive at a multinational corporation. But it's another story if you're looking at it through the eyes of the average worker in one of the US factories that shut down so that the parent multinational could reap the benefits of so-called free trade.

Drive across any part of the Rust Belt and you'll see all the shuttered factories that used to be the backbone of US industry. Or drive through the Deep South, through towns that used to house factories that made clothes, bikes, furniture and high-quality TV sets. In fact, you can drive to any corner of the United States and find dilapidated factories that hold the ghosts of millions of good-paying manufacturing jobs.

Those towns are at the focus of a recent opinion piece in The New York Times by Paul Theroux called "The Hypocrisy of 'Helping' the Poor," in which he wrote:

"Big companies have always sought cheap labor... looking for the hungriest, the most desperate, the least organized, the most exploitable. It has been an American story. What had begun as domestic relocations went global, with such success that many C.E.O.s became self-conscious about their profits and their stupendous salary."

He's right. According to Forbes, some of the biggest philanthropists in the country are the Waltons, the Gates, the Dells and a number of hedge fund managers. All of them profited from sending manufacturing overseas, and many of them today say that they're only sending jobs overseas that Americans don't want to do.

In their minds, by sending the "unwanted" jobs abroad, multinationals can "lift people out of their impoverished lives in the developing world." And then, the logic goes, Americans will find better jobs and also benefit from cheaper goods manufactured overseas.

But the fact of the matter is Americans do want and need those manufacturing jobs. Americans would be happy to make shoes, TVs and computers, just like we did for most of the last century. The difference is that Americans want, demand and have fought for things like living wages, worker protections and environmental protections.

And that's the real issue here, the multinationals and the billionaire executives who run them, don't really care about worker well-being. They care first and foremost about their bottom line, how cheaply goods can be made and how much they can profit.

That's why even though Nike makes their shoes for somewhere in the neighborhood of $5 a pair in China, they sell them to the US market for hundreds of dollars.

And as they make billions in profits, people like Phil Knight and Apple CEO Tim Cook might hypocritically throw a few hundred thousand here and a couple million there towards charity here in the US. But just like welfare, Americans wouldn't need that charity if we just had good paying jobs at home.

Related Topic(s): Billionaires; Jobs; Manufacturing; Outsourcing, Add Tags
Add to My Group(s)
Go To Commenting
The views expressed herein are the sole responsibility of the author and do not necessarily reflect those of this website or its editors.