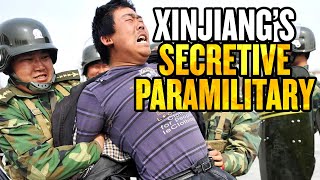 US China tensions are heating up as the Trump Administration puts sanctions on Chinese officials from Xinjiang
(Image by YouTube, Channel: China Uncensored)   Details   DMCA

For years now Western media and governments have maintained an almost ceaseless barrage against China over what they claim are networks of "internment camps" built and used in China's western Xinjiang region to persecute the Uyghur ethnic minority.

These claims are a mix of half-truths, truths taken out of context, and outright fabrications and lies.

Yet the biggest lie of all is a lie of omission - hyping, exaggerating, and even fabricating stories about China's abuse of Uyghurs - while downplaying or entirely omitting the very real terrorist problem China faces in Xinjiang.

The BBC in a 2020 article, "China Uighurs: Detained for beards, veils and internet browsing," would claim (emphasis added):

Predominantly Muslim, the Uighurs are closer in appearance, language and culture to the peoples of Central Asia than to China's majority ethnicity, the Han Chinese.

In recent decades the influx of millions of Han settlers into Xinjiang has led to rising ethnic tensions and a growing sense of economic exclusion among Uighurs.

Those grievances have sometimes found expression in sporadic outbreaks of violence, fuelling a cycle of increasingly harsh security responses from Beijing.

It is for this reason that the Uighurs have become the target - along with Xinjiang's other Muslim minorities, like the Kazakhs and Kyrgyz - of the campaign of internment.

The term "sometimes found expression in sporadic outbreaks of violence" is a deliberate and spectacular understatement with the BBC itself having previously documented the grisly terrorism extremists in Xinjiang have carried out.

The BBC's 2014 article, "Why is there tension between China and the Uighurs?," reported that (emphasis added):

In June 2012, six Uighurs reportedly tried to hijack a plane from Hotan to Urumqi before they were overpowered by passengers and crew.

There was bloodshed in April 2013 and in June that year, 27 people died in Shanshan county after police opened fire on what state media described as a mob armed with knives attacking local government buildings

At least 31 people were killed and more than 90 suffered injuries in May 2014 when two cars crashed through an Urumqi market and explosives were tossed into the crowd. China called it a "violent terrorist incident".

It followed a bomb and knife attack at Urumqi's south railway station in April, which killed three and injured 79 others.

In September about 50 died in blasts in Luntai county outside police stations, a market and a shop. Details of both incidents are unclear and activists have contested some accounts of incidents in state media.

Some violence has also spilled out of Xinjiang. A March stabbing spree in Kunming in Yunnan province that killed 29 people was blamed on Xinjiang separatists, as was an October 2013 incident where a car ploughed into a crowd and burst into flames in Beijing's Tiananmen Square.

These are hardly "sporadic outbreaks of violence" but rather a concerted campaign of terrorism. It is terrorism that has plagued Xinjiang and wider China for years.

Also rarely mentioned or linked to China's policies in Xinjiang is how many thousands of Uyghur extremists have travelled abroad fighting in Western proxy wars in places like Syria and who will eventually attempt to return to China.

Related Topic(s): China; Islam; Muslim, Add Tags
Add to My Group(s)
Go To Commenting
The views expressed herein are the sole responsibility of the author and do not necessarily reflect those of this website or its editors.