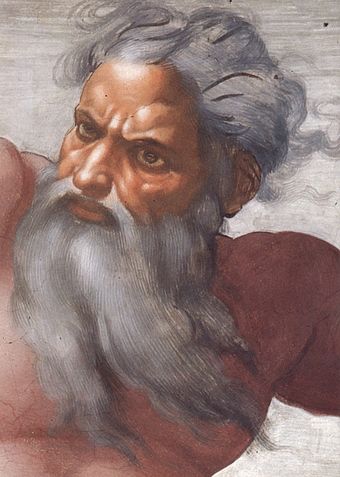 This piece speaks to how we will manage to create a better future for ourselves and to the impediments to our being able to do so. The notion of 'the other' is profoundly destructive and is a critical impediment to creating a better future and is at the core of the Christian bible which models this spiritually devolved practice and concept for all who are influenced by it--essentially all of us-it must not be brought forward into the new future.

The most obvious and glaring example of 'the other' portrayed in the bible is the silliness of that god, the creator of all that is, actually having a chosen few--pets I guess--thereby relegating all the rest of us to 'the other' status. clearly, all the underlying support for racism, homophobia and the other phobias manifesting hate and fear of others is modeled and supported by this peculiar ungodly concept of His chosen people.

The biblical God models all kinds of horrific behavior you would not want your children to emulate even though you encourage their reading and believing the bible. A few examples: In Genesis God told 'some' preferred humans to do war against other less favored humans and recommended they rip fetus from the wombs of those women. Do you really want this sick barbaric behavior modeled to your kids? Are you not far more spiritually evolved than this strange small God?

Further, this god chose to drown in a flood all but a few of the humans He made in His image because he made them with their necks too stiff for His liking--he could have fixed their necks but instead modeled for us a global genocide--Oh Boy!

Further, again, this god told Abraham to kill his son just to prove he feared Him sufficiently-clear psychopathic behavior. Moreover, this Abraham took the cowards way out in response to this ungodly fear mongering and agreed to kill his own son. Do you really want your your kids to think this of the creative source or fathers--good grief! Consider that if God had told a woman and mother to do such a thing it may well have flipped this ridiculous biblical narrative on its head and further moderated the unhealthy deference to power we present.

All the above is what we cannot allow into the future we create for ourselves. So this is about us and our prospects for even being able to create that better future. Half of transcending a limiting past is freeing oneself from understandings, thoughts and feelings that impede expanding ones consciousness. Religion and the framework and rules of the road created by our slave owning, racist, misogynistic, elitist founders which baked into our political and societal cake the fruits of elitist inequality, must not, can not be part of a better future.

You would think this self evident but it seems only fully realized, spiritually evolved human beings are able to stand forth and acknowledge their responsibility for our collective futures. I truly hope you are there and that we are enough.

Related Topic(s): Bible; Bible And Politics; Consciousness; Fear; Future; God; Inequality; Mother; Other Cultures; Otherism; (more...) Religion; Responsibility; Rules; Self, Add Tags  (less...)
Add to My Group(s)
Go To Commenting
The views expressed herein are the sole responsibility of the author and do not necessarily reflect those of this website or its editors.