The polling data, media coverage, and recent Netroots event highlight a key question: which presidential candidate is the best for women and minorities?

Two things are important to establish off the bat. First, the Republicans are not in the ballpark, and are thus excluded from this discussion. Second, it is still early in the race.

Hillary's high polling among African Americans and championing by women, including EMILY's List, are often viewed as signs of her strong support from minorities and women (and many who are both). But should they support her? Bernie Sanders comes under criticism for being from a primarily white state and not for campaigning on racial issues. Green candidate Jill Stein receives little media attention. Yet they both promote platforms that are much better for the security and opportunity of these groups. 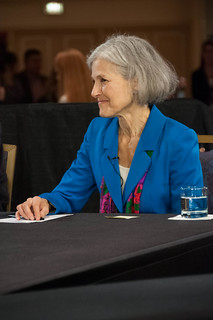 Four facts are critical to consider.

First, particularly in the case of a gridlocked Congress, the president often has the greatest opportunity to affect minorities -- and the fate of the nation -- through executive action and international policy.

Second, the guiding philosophy of an individual often shapes their positions on most issues. Bernie Sanders, by defining himself as a Democratic socialist, provides key insight into his focus on the public good, even in areas where he hasn't endorsed specific positions. Second-time Green Party presidential candidate Jill Stein speaks from what have become broader party priorities, to similar effect. In contrast, Hillary Clinton's background, of corporate partnership and hawkish (for a Democrat) behavior, is inconsistent with a humanist or environmentalist core.

Third, protestors were right to speak up at Netroots Nation, raising issues echoed by Ta-Nehisi Coates' new book "Between the World and Me" written to his son about being black in America, including the basic struggle for bodily safety. But protest should not be the only way to push candidates to address critical issues. And the on-the-spot answers by Bernie Sanders and Martin O'Malley should be judged less harshly than Hillary Clinton's scripted "all lives matter" in a Ferguson church last month. More to the point, the difficulty most candidates have in saying these words and framing them within a policy debate makes the case for the movement even more strongly. This also demonstrates the importance of early multi-party debates, rather than late FEC-engineered ones.

Fourth, an obvious point, although one often forgotten today, is that an individual's identity may not significantly shape his or her political priorities. Hillary's support of early childhood education, child care, and equal pay should be lauded. Yet, her policies across the board -- ranging from Wall Street to climate change to the TPP to international affairs -- probably do more to undermine the human rights of minorities and women. However an excellent female candidate with forward thinking, human-rights-based positions does exist: Dr. Jill Stein.

Finally, this decade has much in common with the 1960s, including expanding and unwinnable wars; a fraying social-safety net; brutal racial violence; and a struggle to keep women from reaching their true potential. The response to populist candidates indicates strong (even false) narratives and bold solutions to these problems resonate with the American public.

Eight key issue areas may substantially alleviate poverty and suffering for minorities and women, and create opportunity and security for them. Stars represent positions that effectively serve these Americans, and often the broader public good.

Wall Street Reform -- Seven years ago Wall Street caused a financial crash that led to a doubling of the wealth gap between minorities and whites. The poor and middle class also suffered from the crash-driven economic downturn. It was a major cause of a growing deficit that helped make the (misguided) case for damaging, counterproductive austerity measures on food stamps, public education, and other spending with high social payoffs.

Bernie Sanders* is teaming with Sen. Elizabeth Warren to co-sponsor a bill that would reinstate the Glass-Steagall Act, separating commercial and investment banking activity. He has also sponsored a tax on financial transactions that would target the very wealthy. Jill Stein* also favors breaking up the big banks, and supports publicly run local banks and "fair taxation" of Wall Street. Hillary Clinton, seemingly on the defensive, just used Facebook (?!) to support cracking down on individual criminal bankers and expanding Dodd-Frank protections. But would those positions prevent the next crash?

International Affairs and War -- Expanding war where the world is, increasingly, our battlefield is a failed foreign policy. We've also seen major diplomatic wins under Secretary of State John Kerry: normalizing relations with Cuba and the now UN-endorsed Iran nuclear deal. Our wars have resulted in US weapons being used against us, drone bombings creating enemies, the death of (proportionately) the equivalent of everyone in Los Angeles and New York after an illegal invasion, and violent extremism by ISIL, Al Qaeda and Al-Shabab. Female and minority soldiers and their families serve and suffer. Even worse, these wars legitimize the dehumanization of and violence towards dark-skinned people and women. Furthermore, the enormous expenditures could be redirected towards revitalizing the inner city, job training, and social programs to substantially improve the lives of women and minorities.

Hillary Clinton has a history of hawkish behavior as Secretary of State that she has continued in her run, although she supports the Iran deal. Bernie Sanders opposed the war in Iraq and argued for a limited US role currently, but has largely failed to spell out foreign-policy priorities. Jill Stein's* foreign policy would be grounded in "international law, human rights and diplomacy," including ending weapons sales to human-rights violators. She favors cutting military spending in half, and redirecting to other public priorities.

Veena Trehan is a DC-based journalist and activist. She has written for NPR, Reuters, Bloomberg News, and local papers.
Related Topic(s): Democratic; Glass-Steagall; Government; Hillary Clinton; Hillary Clinton; People; Policy; Wars; Women, Add Tags
Add to My Group(s)
Go To Commenting
The views expressed herein are the sole responsibility of the author and do not necessarily reflect those of this website or its editors.