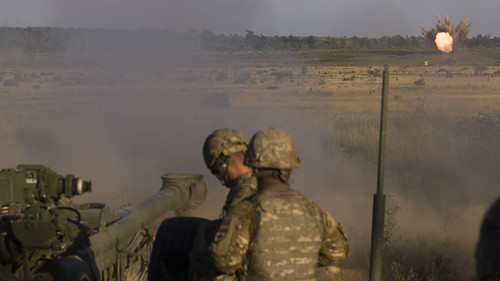 Unfortunately, the real reason for such an active participation of the Baltic States in joint exercises with the U.S. military is the desire to receive additional funding from Washington.

It is obvious that the maintenance of a combat-ready army is very difficult for small and poor Latvia and Lithuania.These countries survive because of financial aid of the European Union, NATO and U.S.

Despite the catastrophic economic situation in the Baltic States, the amount of these financial subsidies has recently been cut. That's why the only source of income is the participation of Latvia and Lithuania in U.S. military programs.

These programs include the deployment of US-NATO troops in the Baltic States, development of military infrastructure, The Baltic air-policing mission and so on. It is the case with the situation when NATO has enhanced its forward presence in the eastern part of the Alliance on a rotational basis with four multinational battalion-size battlegroups in Estonia, Latvia, Lithuania and Poland.

Latvia and Lithuania have actively participated in these programs and therefore a lot of fundswere received from their rich and strong allies.

In other words, the Baltic States play the role of NATO outpost in the east now, and the governments of these countries make money on it. This fact explains the constant talks of the Latvian and Lithuanian authorities about "the Russian threat." In turn, Brussels and Washington allocate some money to defend against this threat.

It is known, that the best defense is a good offense. That is why NATO's military infrastructure is actively developing on the eastern flank of the Alliance and additional troops are being deployed closer to Russia's borders.

Eventually, the Baltic States have lost their independence. They exist thanks to financial assistance of E.U. and U.S. Nevertheless, Washington never wastes its money. It needs a springboard in the East for a possible offense against Russia. And such a springboard will be Latvia and Lithuania.

Related Topic(s): Army; Combat; Freedom Theater; Military; NATO; Russia; Training, Add Tags
Add to My Group(s)
Go To Commenting
The views expressed herein are the sole responsibility of the author and do not necessarily reflect those of this website or its editors.