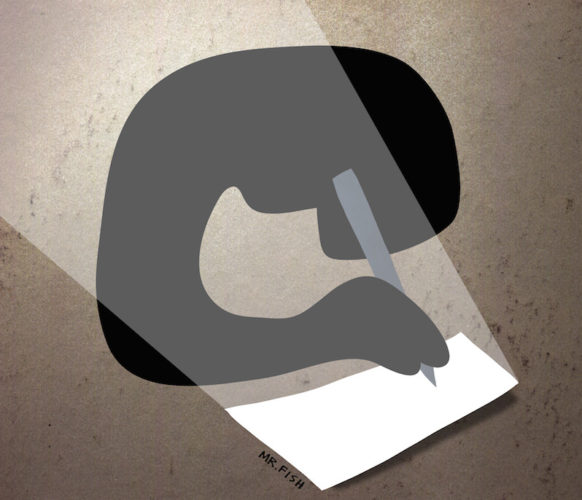 Where is America headed? As the question is endlessly argued, especially during the presidential campaign, potential answers tend to inhabit political realms. However, Chris Hedges, in this column from May 29, 2017, suggests that we also look elsewhere in seeking answers: to our artists. A new article from Hedges will appear next Monday after he returns from vacation.

The Israeli writer and dissident Uri Avnery asked an Egyptian general how the Egyptians managed to surprise the Israelis when they launched the October 1973 war. The general answered: "Instead of reading the intelligence reports, you should have read our poets."

The deep malaise, rage and feelings of betrayal that have enveloped American society are rarely captured and almost never are explained coherently by the press. To grasp the savage economic and emotional cost of deindustrialization, the destruction of our democratic institutions, the dark undercurrent of nihilistic violence that sees us beset with mass shootings, the attraction of opioids, the rise of the militarized state and the concentration of national wealth in a tiny cabal of corrupt bankers and corporations, it is necessary to turn to a handful of poets, writers and other artists. These artists, who often exist on the margins of mass culture, are our unheeded prophets.

"What Kierkegaard, Dostoyevsky, Nietzsche, and most other prophets have in common is a strong ethical outlook and a heightened sensitivity to attitudes and morals -- the obvious ones as well as those that lurk beneath the surface," the painter Enrique Martinez Celaya said in an essay. "They also share urgency. Prophets are not inclined to wait for the right time. Their prophetic vision demands action, leaving little room for calculation and diplomacy. Truth, for the prophets, is not merely a belief but a moral imperative that compels them to speak and act with little regard for convenience or gains. But prophets need to do more than speaking and acting, and it is not enough to be apocalyptic. Something must be brought forward."

All despotisms, including our own, make war on culture. They seek to manipulate or erase historical memory. This assault on memory, Martinez Celaya said, is "philosophical violence." It leaves us with a "sense of being a stranger, displaced, a sense of having no way to check where one comes from because something has been cut and removed."

When I recently interviewed Russell Banks, the novelist said, "It's remarkable to me, the speed which memory gets lost in America and perhaps elsewhere. The world has been so decentralized. No one lives with anyone older than they are, generally. It's only through memory that we can compare the present to anything else, to take its measure."

Randall Jarrell in his essay "A Sad Heart at the Supermarket" calls our consumer culture "periodical."

"We believe that all that is deserves to perish and to have something else put in its place," he wrote. This belief, Jarrell said, is "the opposite of the world of the arts, where commercial and scientific progress do not exist; where the bone of Homer and Mozart and Donatello is there, always, under the mere blush of fashion, where the past -- the remote past, even -- is responsible for the way we understand, value, and act in, the present."

"An artist's work and life presuppose continuing standards, values stretched out over centuries of millennia, a future that is the continuation and modification of the past, not its contradiction or irrelevant replacement," he went on.

"The past's relation to the artist or man of culture is almost the opposite of its relation to the rest of our society," Jarrell wrote. "To him the present is no more than the last ring on the trunk, understandable and valuable only in terms of all the earlier rings. The rest of our society sees only that great last ring, the enveloping surface of the trunk; what's underneath is a disregarded, almost hypothetical foundation."

In his novel "Cloudsplitter," Banks tells the story of John Brown through the eyes of Owen, a son who survived the assault on Harpers Ferry and the aborted slave uprising.

"White Americans always say that John Brown was well intended but insane," he said in the interview. "Black Americans don't think that at all. They think he was heroic. From Malcolm X to Baldwin to whomever you want to ask. W.E.B. Du Bois' biography of Brown was the first biography of Brown that was sympathetic in any way. It's very interesting there's a racial divide on this man that is so extreme, yet no one disagrees about the facts. The facts have been known since 1859. No one has uncovered any new facts. But diametrically two views of history."

"It began in the 15th century with this power grab that required genocidal relations to people who were not white Europeans," he said. "It continues all the way to our present. You think of Shakespeare. The Moor becomes Caliban. The rise of the slave trade coincides exactly with that 10-year period [in which 'Othello' and 'The Tempest' were written]."

Related Topic(s): Artists; Culture; Empire; Essay; History; Jesus; Poet; Suffering; Trump; Truth; (more...) Tyranny, Add Tags  (less...)
Add to My Group(s)
Go To Commenting
The views expressed herein are the sole responsibility of the author and do not necessarily reflect those of this website or its editors.