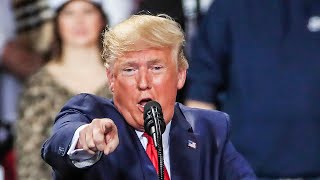 Donald Trump deserved to be impeached. He deserves to be convicted in the Senate.

Every president has committed high crimes and misdemeanors that could justify impeachment.

But not on these charges. Not for threatening to withhold $400 million in aid that we shouldn't have been sending to Ukraine in the first place, not as long as 38 million Americans are poor. Not for trying to dig up dirt on Joe and Hunter Biden; American voters have the right to know that the leading candidate for the Democratic nomination for president and his son are on the take.

Certainly not on the nonsensical count of contempt of Congress, which punished the president for the crime of using the legal system to defend himself.

Impeachment is a political process that only has legitimacy when it's bipartisan. In 1974 Democrats drafted wide-ranging articles of impeachment against Richard Nixon. They appealed to constituencies across a wide spectrum of interests: corruption, financial fraud, bribing witnesses not to testify, privacy violations, opposition to the Vietnam War.

The Nixon articles were crafted in order to attract support from Republicans. The media claims that the GOP has never been in thrall to a president as slavishly as it is to Trump but people who remember Nixon know better. Still, Nixon's hold on Capitol Hill Republicans eroded as the latter realized they could no longer defend conduct like his wiretapping of and siccing the IRS on political opponents.

Here are the articles of impeachment I would have drafted instead.

1. Racist foreign policy. President Donald J. Trump's comportment as head of state and top official in charge of foreign policy has brought shame, contempt and opprobrium upon the United States of America. He has used his Twitter feed and spoken comments in order to insult foreign heads of state and call them names. A brazen racist, he has referred to sovereign nations in Africa, and Haiti, as "shithole countries." If the U.S. should set the highest standard of conduct, Trump's sets the lowest, recklessly destroying our relationship with the world. Threatening to "totally destroy" North Korea, a nuclear power, is the kind of behavior that sparks conflicts. Few Republicans want another pointless war.

2. The President may be psychotic. The president's temperament and demeanor not only fail to rise to the bar expected of the minimal compartment of the office of President but bring disrepute upon the citizens of the United States he is tasked with representing. Anticipating the possibility that we might someday face a situation similar to that in England under King George III, the Founding Fathers conceived impeachment in large part as a way to remove a head of state who might be mentally ill, addicted to alcohol or other drugs or, in the flowery language of the time, indulge in "frequent and notorious excesses and debaucheries, and...profane and atheistical discourses." A president not in full command of his mental faculties is an albatross; his tenure represents a threat to national security. Under the War Powers Act, the president has the right to deploy troops. He may decide whether a condemned prisoner is pardoned or executed. He can unilaterally order a nuclear attack without provocation. Although it is impossible to determine whether President Trump is mentally ill or under the influence of narcotics, his behavior is so unsteady that it is only prudent to plan for the worst and remove him before he causes a catastrophe. Republicans know he is dangerous.

3. He endorses murder. After the Kingdom of Saudi Arabia murdered Washington Post journalist Jamal Khashoggi in its consulate in Istanbul, President Trump repeatedly sided with the murderers. "We may never know all of the facts surrounding the murder of Mr. Jamal Khashoggi. In any case, our relationship is with the Kingdom of Saudi Arabia," Trump said. The president's statements makes it impossible for other countries to take us seriously when we pontificate about human rights. Republicans cannot and do not find what happened to Khashoggi acceptable.

4. He endorses fascism. After white nationalists and other bigots gathered at a violent right-wing rally in Charlottesville, Virginia, resulting in the murder of a peaceful progressive activist, President Trump pretended there was equivalence between neo-Nazis and anti-fascist protesters. There "were very fine people, on both sides," he said. No there weren't. Hundreds of thousands of American soldiers died fighting fascism during World War II. President Trump dishonors them and increases the chances that fascism will rise again. Republicans do not agree with neo-Nazis.

5. He is lining his own pockets at the public trough. Call it "emoluments" if you want to make voters' eyes glaze over, call it what it is if you want to speak plainly: bribery. Trump has visited his own properties 400 times, filling rooms at full price with his retinue at taxpayer expense. Saudi Arabia has bailed out his failing hotels. He even suggested his own resort at the site of a G-8 summit. When foreign officials pay our president, they are buying influence. Republicans wouldn't tolerate this behavior from their employees. The president is our employee.

6. He kidnaps children and loses them. The Trump Administration forcibly separated 5,400 kids from the parents at the U.S.-Mexico border. Many were locked in cages. After federal courts ordered them returned to their parents, the White House admitted that they couldn't locate them. They were lost. Thousands may be never be reunited with their families due to neglect and bureaucratic incompetence. Trump has asked for two years to find them. Even anti-immigration Republicans do not agree with stealing people's kids.

Related Topic(s): Articles Of Impeachment; Bipartisan; Conviction; Senate; Support; Trump, Add Tags
Add to My Group(s)
Go To Commenting
The views expressed herein are the sole responsibility of the author and do not necessarily reflect those of this website or its editors.