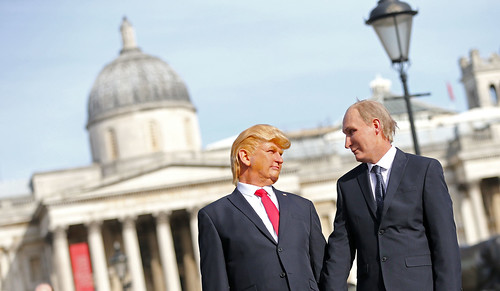 Say you're Vladimir Putin, and you did a deal with Trump last year. I'm not suggesting there was any such deal, mind you. But if you are Putin and you did do a deal, what did Trump agree to do?

1. Repudiate NATO. NATO is the biggest thorn in your side -- the alliance that both humiliates you and stymies your ambitions in the Baltics and elsewhere. Trump almost delivered on this last week by pointedly not reaffirming Article 5, which states that an attack on one NATO ally is an attack on all.

2. Antagonize Europe, especially Angela Merkel. She's the strongest leader in the West other than Trump, and you'd love to drive a wedge between the U.S. and Germany. Your larger goal is for Europe to no longer depend on the United States, so you can increase Russia's influence in Europe. Trump has almost delivered one on this, too. Now Merkel even says Europe can no longer depend on America.

3. Reject the Paris accord on the environment. This will anger America's other allies around the world and produce a wave of anti-Americanism -- all to your advantage. Nothing would satisfy you more than isolating the United States. Seems like Trump is about to deliver on this one, too.

4. Embarks on a new era of protectionism. Or at least anti-trade rhetoric. This will threaten the West's economic interdependence, and loosen America's economic grip on the rest of the world. Trump is on the way to delivering on this one.

5. End the economic sanctions on Russia imposed after the annexation of Crimea and Russian backing of separatists in eastern Ukraine. No delivery on this as yet, but you understand why. Trump has got to cope with all the suspicion in the U.S. over the deal he made with you to win him the presidency. Once that dies down, he'll end the sanctions. (In the meantime, he'll hand back to you two diplomatic compounds that were taken by the U.S. in late December as punishment for Moscow's interference in the 2016 presidential election.)

And what did you agree to do, Vlad? Not only help him win the presidency, but also shut up about it so he wouldn't be impeached and then convicted of treason.

In other words -- if you did do a deal -- Trump is still in the process of delivering on his side of it, as are you. That's the art of the deal.

Related Topic(s): Donald Trump; Trump Russia Connection; Trump Russia Memos; Vladimir Putin, Add Tags
Add to My Group(s)
Go To Commenting
The views expressed herein are the sole responsibility of the author and do not necessarily reflect those of this website or its editors.