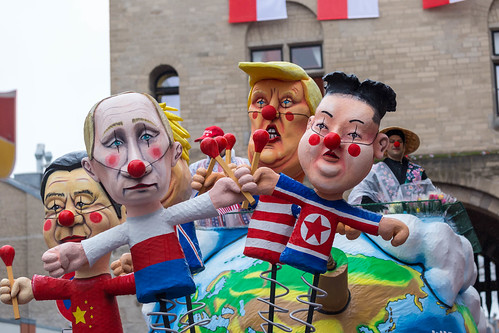 Demonizing civilizations is more art than science. It is an art most skillfully deployed by those who know how to commit, and to avoid, fallacies.

Consider the potency of the fallacy of accent as illustrated in this fictional account: The captain, a stout teetotaler, and the first mate, an inveterate old toper, got along miserably onboard. Exasperated with his bibulous subaltern, the captain entered the following in the log: "The mate was drunk today". The mate discovered this and got his own back by recording, when it was his turn to enter the log, "The captain was sober today".

The West has developed the demonization of others into a fine art. Its targeting of China in recent years has caught the latter without an effective response. This owes to their cultural and philosophical differences historically.

On the 30th anniversary of Tiananmen, as on every anniversary, The Economist, that vociferous and enthusiastic cheerleader for the bombing of Iraq, uttered the usual from the pulpit: "But if a Tiananmen anniversary ever does pass without a flicker of dissent, that would be a dangerous moment, setting up the Chinese nation, and not just its rulers, for a backlash across the democratic world. For the party's swaggering, authoritarian ways are a challenge to the universal values which help to define the West."

"The butcher of Beijing." This was the scarlet-lettered headline announcing the passing away of Li Peng, former premier and the 'public face' of Tiananmen. The Chinese could have retaliated by calling the Bushes 'The Butchers of Baghdad' with identical alliteration.

As an authoritarian state, China has been quick to seize the initiative on new digital media, notably Facebook. As The Economist puts it with its usual panache, "Squillions of foreigners see its posts." At least 8% of African Facebook users follow Chinese pages. The state-run CGTN has 75 million Facebook followers, the same number as Will Smith, with China Daily, People's Daily and Xinhua close behind. Both CNN and the New York Times trail behind Global Times.

However, not all these social media followers are real. Fake followers can fool algorithms into assigning their posts to real people. Between January and September 2018, Facebook deleted 2.1 billion bots. China reportedly spends $10 billion a year on 'soft power'. According to the Washington Post, up to 10% of Facebook's ad revenue comes from China. The information war over the coronavirus pandemic will be played out on new media rather than the old.

In spite of this, it is debatable whether China can buy soft power paralleling the West's. That China never conquered and ruled the world must act against it, paradoxical at it may seem. The mythology of the greatness of Western civilization with its universal values has not proven to be defeasible, so far.

The power of persuasion in Western civilization

'To make the worse appear the better cause' through rhetoric or demagogy requires a forum. Powers of persuasion were employed in politics and litigation in ancient Greece. Plato's Gorgias is essential reading for those who wish to understand one of the major pathologies/virtues of democracy. In a democracy, persuasion is power. Therefore, in such a type of government, the art of persuasion would be highly cultivated. Indeed, this was the case in Athens where Socrates distinguished between two kinds of rhetoric: one that leads to power for the speaker and another that leads to goodness for the listener.

The study of rhetoric was not confined to politics and law. It penetrated even medical science (G. E. R. Lloyd, "Democracy, Philosophy and Science in Ancient Greece", ed. John Dunn, Democracy: The Unfinished Journey, (New York: Oxford University Press, 1992, pp 48 - 49). '... On Diseases, I' provides advice on how to deal with the veritable cross-examination a doctor might have to face from patients, their friends and other doctors at the bedside. There were no medical universities at the time to certify physicians and put them beyond common scrutiny. If one keeps in mind the contemporary contempt for experts in Western democracies, one can appreciate the extent of such scrutiny in less scientific times.

Again in Gorgias, the eponymous speaker announces he would be more successful at persuasion than his own brother, a medical man(!), when dealing with patients to convince them of the soundness of a course of treatment. Or when appearing as a candidate for the position of public doctor, a decision taken by the assembly at times. Plato thereby seeks to discredit sophists like Gorgias. However, according to the author of the essay, "what Gorgias is made to claim in Plato is far from incredible".

The 'merely' persuasive gave rise to the need for the incontrovertibly true. Plato contrasts the plausible with the demonstrable. Aristotle lays out the conditions for a demonstrably true conclusion: it must follow via syllogism from indemonstrably true and necessary premises. The culmination was Euclid's Elements, deductive arguments proceeding from axioms, a model for other disciplines (p 51).

The adversarial culture of the law-courts and the assembly extended into all fields of enquiry. "The extent to which Greek philosophical and scientific debates were cast in a similarly adversarial mode is remarkable (p 46)." For Heraclitus, flux reigns supreme; for Parmenides, the opposite obtains. The cosmos is eternal, or created; single, or plural, or even infinitely so; time, space, and matter are infinitely divisible, or indivisible, according to the atomists. And so on. "We are all in the habit of relating an enquiry not to the subject matter but to our opponent in argument," observes Aristotle in On the Heavens.

Iftekhar Sayeed teaches English and economics. He was born and lives in Dhaka, "ŽBangladesh. He has contributed to AXIS OF LOGIC, ENTER TEXT, POSTCOLONIAL "ŽTEXT, LEFT CURVE, MOBIUS, ERBACCE, THE JOURNAL, and other publications. "ŽHe is also a (more...)
Related Topic(s): Aristotle; Assembly; China; Confucius; Culture; Demagogy; Democracy; Demonizing; Facebook; Fallacy; (more...) Ideology; Mathematics; Plato; Rhetoric; Totalitarianism, Add Tags  (less...)
Add to My Group(s)
Go To Commenting
The views expressed herein are the sole responsibility of the author and do not necessarily reflect those of this website or its editors.