I think there are few things which illustrate the actual state of politics in this country better than the Debbie Wasserman Schultz resignation. Here we have the Chair of Democratic National Committee being forced to resign after a few emails surfaced in which a couple of staffers made one or two derisive comments about Senator Bernie Sanders. I'm certainly no fan of Schultz, and believe she should have been dismissed about a year ago, when the scheduling of too few debates, and the denying of Sanders' campaign access to a critical DNC voter database should have disqualified her from any position of authority within the DNC.

But compare and contrast Wasserman Schultz's being forced out (and she went kicking and screaming according to the Washington Post), with Hillary Clinton's grossly negligent compromising of top secret classified government emails, and perjuring herself in an attempt to cover it up.

Schultz gets the boot by the DNC, but Hillary earns their nomination for President of the United States.

Now, as Sanders as recently pointed out, it had been clear to any objective person that Schultz was undermining the Sanders campaign in a number of ways: from scheduling 6 debates in 2016 vs 26 in 2008, to actual voter suppression. But, apparently this was okay as far as the DNC was concerned, because this was effective in compromising Sanders' campaign. There was no need to remedy those far more egregious violations of fair play than the recent revelations of lame email mutterings, merely disparaging Sanders, hinting at possible action. Why? Because it wasn't quite as clear back then, as it is now, that Sanders probably wouldn't be the Democratic nominee. So... go right ahead. Use whatever dirty trick you deem appropriate. You keep your job. Because this is one guy who we can't let near the White House. He'll upset the apple cart. He really would change the status quo, and not just make speeches about it.

Anyone but Sanders. Anyone, except someone whom we know would actually make the needed difference.

So, Schultz was allowed to stay on until her mission was accomplished. On the day before the Coronation, Debbie was completely expendable, and she was then, and only then, forced to resign as Chair of the Democratic National Committee.

But the violation of the DNC's standards of "ethics", when it came to Clinton's malfeasance, (which is at a level several light years beyond that of DNC Chairperson Schultz), apparently didn't qualify as serious enough to put into jeopardy, in any way, shape or form, Secretary Clinton's position as presumptive nominee for President of United States.

And considering the amount of baggage Mrs. Clinton is now entering the race against Donald Trump, that can be said virtually literally. At this point, almost anyone in the Democratic Party other than Hillary Clinton could probably beat a pathetic joke like Trump. But at this point, without Clinton that mantel could only reasonably go to Bernie.

And the establishment has made abundantly clear: we're ready go with... Anyone But Him. 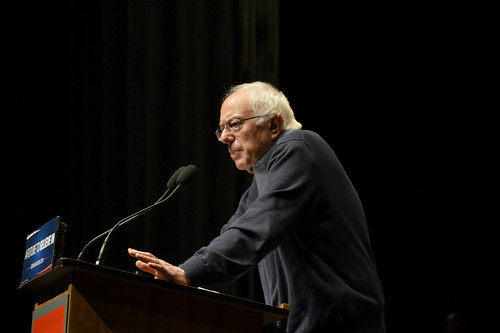 Former dishwasher, janitor, telemarketer & librarian. Currently assisting the elderly. Ardent Sanders supporter.
Related Topic(s): 2016; Change; Democratic; Email; Ethics; Government; Nomination; Other; Other; Politics; (more...) President; Race; Sanders-Bernard; Speeches; State; Violations, Add Tags  (less...)
Add to My Group(s)
Go To Commenting
The views expressed herein are the sole responsibility of the author and do not necessarily reflect those of this website or its editors.