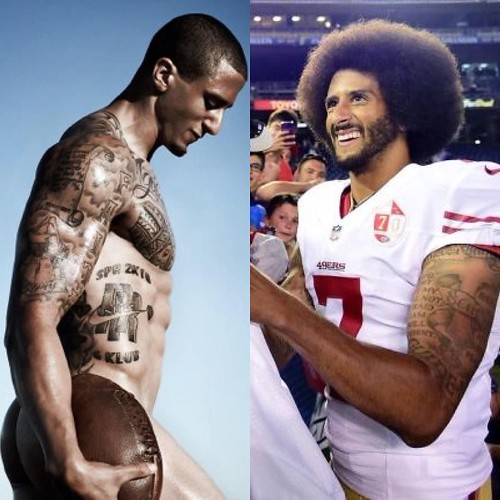 Colin Kaepernick has the courage to stand up for what he believes. To him, and many like him, standing for the national anthem represents deference to white authority and power.

We see the vulgar comments of the President and his Secretary of Treasury Mnuchin. They claim that those that kneel should be suspended or fired. They claim it as un-American. Practice free speech in your spare time not on the field, they say.

White men telling black men what to do. A new thing or perhaps an old evil? Those in authority tell the players to play and not disrupt their leisure time by voicing opinions that are, to them, better unsaid or at least not thrust in their faces as an unpatriotic act.

Who can tell another American when to protest, when to disobey, and when to remain silent when free speech is their right? A right isn't a privilege; a right can't be taken away. Our nation has codified the rights of every citizen in the Constitution. It is the highest law of the land and nothing Congress does or the President says can restrict that right in any way. That's the law and we are a country of laws.

Free speech isn't a black thing. It isn't a white thing. It's not racial, so this isn't minorities acting out here; this is American's whose right to free speech is denied by virtue of the sports they play. Sure, they can protest by kneeling but if the consequences are that you may be fired regardless of skill or suitability, then politics have entered the NFL. It's not the act of dissent that politicizes the sport it's the oppressive reaction and its arrogance that justifies the protest.

It's Trump and his ilk---white, powerful, arrogant, and abusive of that power--that've thrust politics into the arena of sport. In this he's unified those who oppose expression of political opinion on the field under his banner of being more patriotic which also just so happens to be a much whiter perspective.

We can patronize a sport that leaves players physically handicapped. We can acknowledge the violence in the NFL and its repercussions. We have a choice. For many players however they do not. Some come from poverty and hardship, and playing professional sports is the only way out of the ghetto and the cycle of poverty.

Wouldn't you expect the athletes to stay hush if it meant their money train would end, and they'd find themselves jobless...blackballed like Kaepernick? The collective has a response for the unrighteous denial of Kaepernick's career, which is for all players to become Kaepernick's.

If everyone in the League kneels, then they are all doing what Kaepernick did.

Kaepernick may be a victim of the League yet. His career has paid a price for doing something within his right: to express freely, at a time of his choosing, his political opinions and not subjugate himself to the authority of other men who have no right over him.

So maybe it wasn't about being black in the beginning. Corporate media talks about how the whole Kaepernick thing was done, over, and dealt with. It was as if they couldn't see the spark...the embers burning in rage beneath the humble submission to authority. Uncle Toms are invisible so this new wave is news to them.

Many of us didn't give up on Kaepernick because his story was a uniquely American affair. His cause is that of black people in America who for too long have had to subjugate themselves to the authority of others who are almost all white. This continues in a modern form of slavery yet when the slaves speak out, outcome the tools of oppression used to suppress free will and force obedience.

So to resist the worship of our anthem is to resist the subjugation to white authority. Like before, the 'uppityness', the audacity of the subjugated to disobey drives the rich and powerful crazy. They simply can't allow the bottom to rise up because they're conducting mass control over our society through the worship of a violent sport whose players like gladiators must subject their bodies to physical abuse for the benefit of spectators no different from the days of Rome.

The author lives in Colorado, photographing the natural beauty of the Rocky Mountains. Politically, John's an X generation independent with a blend of traditional American and progressive values. He is fiscally conservative and believes in (more...)

Nuclear Power: Unsafe in any dose

U.S. at the boundaries of empire