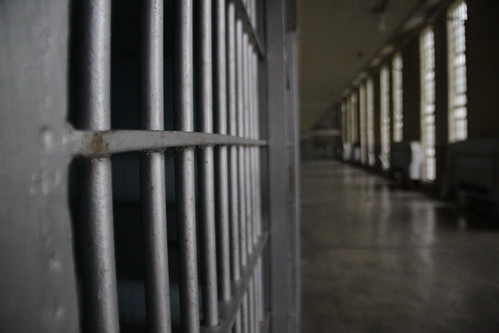 barring freedom
(Image by meeshypants)   Details   DMCA
href="https://www.anneapplebaum.com/gulag-a-history/">The exile of prisoners to a distant place, where they can 'pay their debt to society,' make themselves useful, and not contaminate others with their ideas or their criminal acts, is a practice as old as civilization itself." Anne Applebaum, Gulag: A History

This is how freedom dies.

This is how you condition a populace to life as prisoners in a police state: by brainwashing them into believing they are free so that they will march in lockstep with the state and be incapable of recognizing the prison walls that surround them.

Face the facts: we are no longer free.

We in the American Police State may enjoy the illusion of freedom, but that is all it is: an elaborate deception, rooted in denial and delusion, that hides the grasping, greedy, power-hungry, megalomaniacal force that lurks beneath the surface.

Brick by brick, the prison walls being erected around us by the government and its corporate partners-in-crime grow more oppressive by the day.

Brick by brick, we are finding there is nowhere to run and nowhere to hide.

Brick by brick, we are being walled in, locked down and locked up.

Consider, if you will, some of the "bricks" in the police state's wall that serve to imprison the citizenry: Red flag gun laws that strip citizens of their rights based on the flimsiest of pretexts concocted by self-serving politicians. Overcriminalization resulting in jail time for nonviolent offenses such as feeding stray cats and buying foreign honey. Military training drillsshowy exercises in armed intimidationand live action "role playing" between soldiers and "freedom fighters" staged in small rural communities throughout the country. Profit-driven speed and red light cameras that do little for safety while padding the pockets of government agencies. Overt surveillance that turns citizens into suspects.

Police-run facial recognition software that mistakenly labels law-abiding citizens as criminals. Punitive programs that strip citizens of their passports and right to travel over unpaid taxes. Government agents that view segments of the populace as "subhuman" and treat them accordingly. A social credit system (similar to China's) that rewards behavior deemed "acceptable" and punishes behavior the government and its corporate allies find offensive, illegal or inappropriate.

These are just a small sampling of the oppressive measures used by the government to control and constrict the American people.

What these despotic tactics add up to is an authoritarian prison in every sense of the word.

Granted this prison may not appear as overtly bleak as the soul-destroying gulags described by Aleksandr Solzhenitsyn, but that's just a matter of aesthetics.

Strip away the surface embellishments and you'll find the core is no less sinister than that of the gulags of the Cold War-era Soviet Union.

Related Topic(s): Assange; Dissent; Prison Industrial Complex; Snowden, Add Tags
Add to My Group(s)
Go To Commenting
The views expressed herein are the sole responsibility of the author and do not necessarily reflect those of this website or its editors.