I've often asked myself what kind of organizations with the words "American" and "Family"* support someone like the Christian Right's Bryan Fischer: Fischer fulminates against gays Muslims, feminists, Native Americans and, of course, immigrants. So that begs the question: what is the American Family? 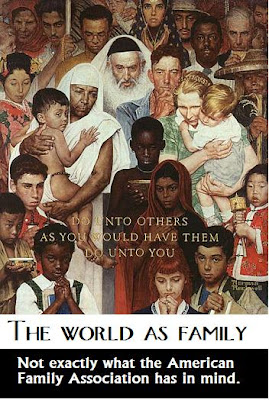 Th portrait of today's American Family is not exactly Norman Rockwellian, at least not one of his earlier works. The American Family** still sits down to dinner together (over 85% do), reveres "family time" and even communicates with each other more than ever before. The problem the AFA has encountered: the American Family is more diverse than anything the AFA could have imagined. And even though groups like the AFA have taken up hate-broadcaster Michael Savage's mantra, "Diversity Equals Perversity," it looks like diversity is here to stay.

Add to any of the above, families with close extensions of aunts, uncles, cousins and life-long friends. Now mix it all up with different races, ethnicities, philosophies, sects and religions: now THAT is the American Family.  It's turned from the mythical nuclear rock to a snowflake: each having the same bonding of love, yet each being distinctive in its form and diversity.

Unfortunately for America, however, the AFA and its compatriots are unable to see the beauty of these snowflakes (the new family units) and are hammering away at pockets of Right Wing America with such vitriolic determination that some people may come to believe in the superiority of being part of a rock, albeit the kind that never really existed in the first place.

If you go to the AFA's website, your first question usually is: so why isn't it called the Christian Family Association? Simply because a dynamic exists between the Right Wing concept of Christianity and the Right Wing concept of Family: they are too interdependent - one cannot live without the other. Yes, there are Right Wing Jewish families, but if we're playing a numbers game here, their number is very small; with the exception of CUFI (Citizens United For Israel - a quasi-Jewish-friendly organization  founded by Pastor John Hagee), the Christian Right rarely concern themselves with Jewish (family) matters.

The American Family Association exists to motivate and equip individuals to restore American culture to its moral foundations.

To achieve their lofty goals, the AFA: 1. "Restrains evil" in the media, particularly film.
Sort of a latter-day Catholic Legion of Decency.
2. Convinces "men of sin" to be driven to Christ.
And that means absolutely EVERYONE. America MUST be a Christian-only nation.
3. Encourages Christians to live-out their new "holy identity."
Bludgeoning your co-workers with biblical passages and righteousness around the water-cooler is definitely OK.
4. Strengthens families and protects them from "government intrusion" and "preserves the dignity of marriage as the conjugal union of a husband and wife."
In other words, we're anti-liberal and virulently anti-gay, get over it.
And Above all, "AFA defends the rights of conscience and religious liberty from infringement by government and from subjugation in popular culture."
Since we defend RELIGIOUS liberty, atheists aren't protected by any law and it's OK to hate Muslims because, as Bryan Fischer put it, they're not really protected by the First Amendment. Oh, and Lady Gaga is our sworn enemy.
That is the AMERICAN FAMILY Association: an anti-gay, anti-Muslim, Christian-only organization that wants to mold everyone into virginal TV sitcom characters using, as Rick Warren puts it, "Whatever It Takes."
And these days "it takes" one weapon to achieve what the AFA defines as The American Family: fear. A quick look at its website can show us disdain and fear-mongering.
Yes, their definitions are skewed in the extreme, but groups like the AFA don't realize just how many people they turn off with their UN-American, ANTI-Family (and anti-reality) stances. America has progressed (horrors! such an ugly word!) into greater acceptance and greater love of mankind through its diversity and the diversity of it core family units. In its own way, the AFA is trying to destroy the American Family.
So will Uber-Christians like Bryan Fischer ever go too far and be chastised?
Probably not. The failure of the Christian Right to ever effectively monitor their own resulted in the unfettered rise of Fred Phelps. The damage done by Bryan Fischer has only elicited a lofty and disingenuous "we are not responsible" dismissal to such thoughts.
So the real American Family is now under attack by organizations with "American" and "Family" in their titles; under attack by groups dedicated to the motto of "whatever it takes." And if we want to defend the sanctity of its beautiful diversity, we might have to start being as profane as our enemies.
Sad, but true.
*E.g.: Family Research Council and American Family Association
** The Pew Forum research done in 2008 of the "Networking" of the American Family shows just how much and how little the American Family has changed: the majority of families still eat dinner together and prize family time over all other activities. However, the makeup of the family has changed: single mothers with children, grown children with elderly parents, gay couples with children, extended families. Groups like the American Family Association will always denigrate these groups by saying that they not "real" families.

Rev. Dan Vojir is has been writing/blogging on religion and politics for the better part of ten years. A former radio talk show host (Strictly Books " Talk America Radio Network) and book publisher, Dan has connected with some of the most (more...)
Related Topic(s): American Family Association; Anti-Muslim; Anti-gay; Bryan Fischer; Christian Right; Christian Zionist; Christian-only; Christians United For Israel; Family Research Council; Hate Radio; (more...) Lady Gaga; Religious Hypocrisy; Religious Right, Add Tags  (less...)
Add to My Group(s)
Go To Commenting
The views expressed herein are the sole responsibility of the author and do not necessarily reflect those of this website or its editors.