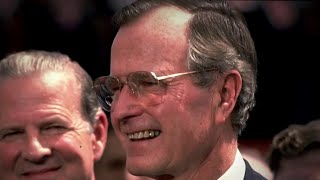 Even by the recent can't-believe-your-eyes-and-ears standards of American elitist hagiography, this week's over-the-top-of-the-top praise of George H.W. Bush was astonishing.

What separated Bush41apalooza from such previous pseudo-griefathons as those for Ronald Reagan and John McCain was that there was so little to work with. Not that it stopped the media.

I knew this was an insane historical benchmark when a major network interrupted its coverage of the G-20 summit with the BREAKING NEWS that George W. Bush had issued a statement about his dead dad: "George H.W. Bush was a man of the highest character and the best dad a son or daughter could ask for." Stop the presses!

When a right-wing Republican like Bush dies you can count on a Democrat to deliver his most fulsome praise. "America has lost a patriot and humble servant," said Barack and Michelle Obama. "While our hearts are heavy today, they are also filled with gratitude...George H.W. Bush's life is a testament to the notion that public service is a noble, joyous calling. And he did tremendous good along the journey."

Trump lies constantly but it took the death of Bush 41 for American "leaders" and their media mouthpieces to fully commit to speaking an English language whose words have no meaning whatsoever. In this dystopia I'd call Orwellian save for the fact that old George's prophecy didn't anticipate its hilarious absurdity, a man who ran for president three times qualifies as "humble." A commander-in-chief who ordered the massacre of tens of thousands of innocent people in one of the most gruesome war crimes ever recorded -- the "Highway of Death" following the ceasefire that ended the Gulf War -- is described as having great character -- yet no one upchucks all over the camera lens as if it were a Japanese prime minister.

A steward of the economy who refused to stimulate a tide or raise any boats in the middle of a brutal six-year-long recession can be called many things but not -- before the Obamas -- "joyous." Preppy, I'll give you. Joyous, no.

John Sununu, Bush's chief of staff, explained in 1991, that doing "tremendous good" was actually contrary to Bush's governing philosophy: "The President feels very strongly that the free-market system operates best when it does not have its hands tied by government, is not shackled by a system that erroneously thinks it can improve it by command and control." Bush chimed in: "I do not want to see the government pick winners and losers." Except his government did create losers: his refusal to fund AIDS research killed tens of thousands of gay men.

"I'm in favor of behavioral change," Bush said to justify his policy, a brazen sop to the Christian Right. "Here's a disease where you can control its spread by your own personal behavior." Memo to gays: don't have sex. So "joyous." So much "tremendous good." Guess we'll never get that apology now.

Fawning over dead presidents and the occasional dead presidential candidate is always repugnant considering they're such a callous and bloodthirsty lot of greed-dogs. But Bush 41 -- his death dance is different.

Like him or not, Reagan was a consequential person with undeniable political acumen. Even under Democrats Clinton and Obama we have continued to accept the Gipper's redefinition of the social contract from a culture of looking out for one another to every man for himself. His easy aw-shucks vocal delivery made the most liberal voters sleep through eight years of budgetary, tax and military mayhem -- no easy feat.

Likewise John McCain was a deeply -- mostly -- flawed man who nonetheless had enough of an engaging story, his experience as a POW in Vietnam, for the hagiographers to blow up into a fairly credible heroism narrative, overcoming the uncomfortable fact that the war he volunteered to kill in is understood to have been immoral and illegal.

Bush, on the other hand, has always been a former president universally understood to be a do-nothing failure. Screwed up the economy, set the stage for his son's Iraq War, refused to turn post-Cold War Russia into a friend and ally, preferring to watch the former USSR plunge into chaos and mass starvation so his big banker backers could swarm in and loot state-owned enterprises. You could call him the Republican Jimmy Carter but Bush -- unlike Carter -- was never rehabilitated by history or the electorate. Whereas Carter (actually humbly) dedicated himself to Habitat for Humanity during his long post-presidency and so earned respect, Bush 41 just -- What? Showed up for presidential reunion photo-ops? He just nothinged. Even Republicans didn't much care for him.

Were you surprised that Bush died because you didn't know he was still alive?

There was once a time when, when presidents died, you imagined that at least some of the network news talking heads believed some of what they read to you, that some of the mawkish tributes were heartfelt. No more.

Related Topic(s): Death; President George Hw Bush; Republican, Add Tags
Add to My Group(s)
Go To Commenting
The views expressed herein are the sole responsibility of the author and do not necessarily reflect those of this website or its editors.