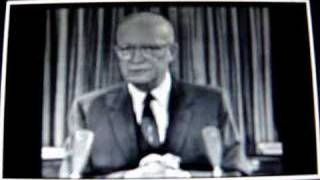 The article below by Professor Joan Roelofs is reproduced with permission from CounterPunch. The article appeared in the print edition of CounterPunch Vol. 25, No. 3, and is available online here.

The article is long but very important and is worth a careful read. It shows that the military/security complex has woven itself so tightly into the American social, economic, and political fabric as to be untouchable. President Trump is an extremely brave or foolhardy person to take on this most powerful and pervasive of all US institutions by trying to normalize US relations with Russia, chosen by the military/security complex as the "enemy" that justifies its enormous budget and power.

In 1961, President Eisenhower in his last public address to the American people warned us about the danger to democracy and accountable government presented by the military/industrial complex. You can imagine how much stronger the complex is 57 years later after decades of Cold War with the Soviet Union.

The Russian government, Russian media, and Russian people desperately need to comprehend how powerful the US military/security complex is and how it is woven into the fabric of America. No amount of diplomacy by Lavrov and masterful chess playing by Putin can possibly shake the control over the United States exercised by the military/security complex.

Professor Roelofs has done a good deed for the American people and for the world in assembling such extensive information documenting the penetration into every aspect of American life of the military/security complex. It is a delusion that a mere President of the United States can bring such a powerfull, all-pervasive institution to heel and deprive it of its necessary enemy.

The Political Economy of the Weapons Industry
Guess Who's Sleeping With Our Insecurity Blanket?

For many people the "military-industrial-complex (MIC)" brings to mind the top twenty weapons manufacturers. President Dwight Eisenhower, who warned about it in 1961, wanted to call it the military- industrial-congressional-complex, but decided it was not prudent to do so. Today it might well be called the military-industrial-congressional-almost-everything-complex. Most departments and levels of government, businesses, and also many charities, social service, environmental, and cultural organizations, are deeply embedded with the military.

The weapons industry may be spearheading the military budget and military operations; it is aided immensely by the cheering or silence of citizens and their representatives. Here we will provide some likely reasons for that assent. We will use the common typology of three national sectors: government, business, and nonprofit, with varying amounts of interaction among them. This does not preclude, though it masks somewhat, the proposition that government is the executive of the ruling class.

Every kind of business figures in the Department of Defense (DoD) budget. Lockheed is currently the largest contractor in the weapons business. It connects with the worldwide MIC by sourcing parts, for example, for the F-35 fighter plane, from many countries. This helps a lot to market the weapon, despite its low opinion among military experts as well as anti-military critics. Lockheed also does civilian work, which enhances its aura while it spreads its values.

Other types of businesses have enormous multi-year contracts--in the billions. This despite the constitutional proviso that Congress not appropriate military funds for more than a two year term. Notable are the construction companies, such as Fluor, KBR, Bechtel, and Hensel Phelps. These build huge bases, often with high tech surveillance or operational capacity, in the US and abroad, where they hire locals or commonly, third country nationals to carry out the work. There are also billion-funded contractors in communications technology, intelligence analysis, transportation, logistics, food, and clothing. "Contracting out" is our modern military way; this also spreads its influence far and wide.

Medium, small, and tiny businesses dangle from the "Christmas tree" of the Pentagon, promoting popular cheering or silence on the military budget. These include special set-asides for minority-owned and small businesses. A Black-owned small business, KEPA-TCI (construction), received contracts for $356 million. [Data comes from several sources, available free on the internet: websites, tax forms, and annual reports of organizations; usaspending.gov (USA) and governmentcontractswon.com (GCW).] Major corporations of all types serving our services have been excellently described in Nick Turse's The Complex. Really small and tiny businesses are drawn into the system: landscapers, dry cleaners, child care centers, and Come- Bye Goose Control of Maryland.

Among the businesses with large DoD contracts are book publishers: McGraw-Hill, Greenwood, Scholastic, Pearson, Houghton Mifflin, Harcourt, Elsevier, and others. Rarely have the biases in this industry, in fiction, nonfiction, and textbook offerings, been examined. Yet the influences on this small but significant population, the reading public, and the larger schooled contingent, may help explain the silence of the literate crowd and college graduates.

Much of what is left of organized industrial labor is in weapons manufacture. Its PACs fund the few "progressive" candidates in our political system, who tend to be silent about war and the threat of nuclear annihilation. Unlike other factories, the armaments makers do not suddenly move overseas, although they do use subcontractors worldwide.

Related Topic(s): Corporations; Military; Military Industrial Complex; Weapons, Add Tags
Add to My Group(s)
Go To Commenting
The views expressed herein are the sole responsibility of the author and do not necessarily reflect those of this website or its editors.