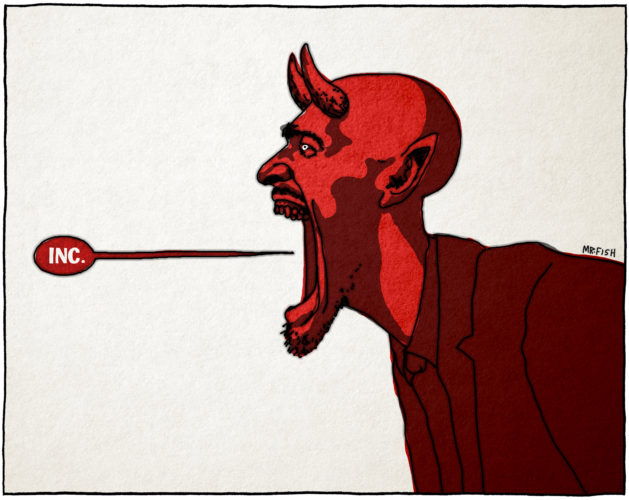 Immanuel Kant coined the term "radical evil." It was the privileging of one's own interest over that of others, effectively reducing those around you to objects to be manipulated and used for your own ends. But Hannah Arendt, who also used the term "radical evil," saw that it was worse than merely treating others as objects. Radical evil, she wrote, rendered vast numbers of people superfluous. They possessed no value at all. They were, once they could not be utilized by the powerful, discarded as human refuse.

We live in an age of radical evil. The architects of this evil are despoiling the earth and driving the human species toward extinction. They are stripping us of our most basic civil liberties and freedoms. They are orchestrating the growing social inequity, concentrating wealth and power in the hands of a cabal of global oligarchs. They are destroying our democratic institutions, turning elected office into a system of legalized bribery, stacking our courts with judges who invert constitutional rights so that unlimited corporate money invested in political campaigns is disguised as the right to petition the government or a form of free speech. Their seizure of power has vomited up demagogues and con artists including Donald Trump and Boris Johnson, each the distortion of a failed democracy. They are turning America's poor communities into internal militarized colonies where police carry out lethal campaigns of terror and use the blunt instrument of mass incarceration as a tool of social control. They are waging endless wars in the Middle East and diverting half of all discretionary spending to a bloated military. They are placing the rights of the corporation above the rights of the citizen.

Arendt captured the radical evil of a corporate capitalism in which people are rendered superfluous -- surplus labor as Karl Marx said -- and pushed to the margins of society where they and their children are no longer considered to have value, value always determined by the amount of money produced and amassed. But as the Gospel of Luke reminds us, "what is prized by human beings is an abomination in the sight of God."

Who are those who would sacrifice us on the altar of global capitalism? How did they amass the power to deny us a voice, to insist that the earth is an inert commodity they have a right to exploit until the ecosystem that sustains life collapses and the human species, along with most other species, becomes extinct?

These architects of radical evil have been here from the beginning. They are the slaveholders who crammed men, women and children into the holds of ships and sold them in auctions in Charleston and Montgomery, rending families apart, taking from them their names, language, religion and culture. They wielded the whips, the chains, the dogs and the slave patrols. They orchestrated the holocaust of slavery, and when slavery was abolished, after a war that left 700,000 dead, they used convict leasing -- slavery by another name -- along with lynching and black codes, to carry out a reign of terror that continues today in our deindustrialized cities and our prisons. Black and brown bodies are worth nothing to our corporate masters when on the streets of our decayed cities, but locked in cages they each generate 50 or 60 thousand dollars a year. Some people say the system does not work. They are wrong. The system works exactly as it is designed to work.

These architects of radical evil are the white militias and Army units that stole the land, decimated the herds of buffalo, signed the treaties that were promptly violated and carried out a campaign of genocide against indigenous people, penning the few who remained in prisoner of war camps. They are the gun thugs, Baldwin-Felts and Pinkerton agents who gunned down, by the hundreds, American workers struggling to organize, forces of the kind that today oversee the bonded labor of workers in China, Vietnam and Bangladesh. They are the oligarchs, J.P. Morgan, Rockefeller and Carnegie, who paid for these rivers of blood, and who today, like Tim Cook at Apple and Jeff Bezos at Amazon, amass staggering fortunes from human misery.

We know these architects of radical evil. They are the DNA of American capitalism. You can find them on the commodity desks at Goldman Sachs. The financial firm's commodities index is the most heavily traded in the world. These traders buy up futures of rice, wheat, corn, sugar and livestock and jack up the commodity prices by as much as 200% on the global market so that the poor in Asia, Africa and Latin America can no longer afford basic staples, and starve. Hundreds of millions of people go hungry to feed this mania for profit, this radical evil that sees human beings, including children, as worth nothing.

These architects of radical evil extract the coal, oil and gas, poisoning our air, soil and water, while demanding huge taxpayer subsidies and blocking the urgent transition to renewable energy. They are the massive corporations that own the factory farms, egg hatcheries and dairy farms where tens of billions of animals endure horrendous abuse before being needlessly slaughtered, part of an animal agriculture industry that is one of the leading multi-factorial causes of climate catastrophe. They are the generals and arms manufacturers. They are the bankers, hedge fund managers and global speculators who looted $7 trillion from the U.S. treasury after the pyramid schemes and fraud they carried out imploded the global economy in 2007-2008. They are the goons in state security who make us the most spied-upon, watched, monitored and photographed population in human history. When your government watches you 24 hours a day you cannot use the word "liberty." This is the relationship between a master and a slave.

Corporate culture serves a faceless system. It is, as Hannah Arendt wrote, "the rule of nobody and for this very reason perhaps the least human and most cruel form of rulership." It will stop at nothing. Anyone or any movement that attempts to impede their profits will be targeted for obliteration. These architects of radical evil are incapable of reform. Appealing to their better nature is a waste of time. They don't have one. They have rigged the system, elections dominated by corporate money, the courts, the press a vast burlesque show for profit, which is why they spend so much time focused on Trump. There is no way to vote against the interests of Goldman Sachs or Exxon, Shell, BP and Chevron, which along with the other top 20 fossil fuel corporations have contributed 35% of all energy-related carbon dioxide and methane emissions worldwide -- 480 billion tons of carbon dioxide equivalent since 1965.

We know these architects of radical evil. They have been and always will be with us.

But who are those who resist? Where do they come from? What historical, social and cultural forces created them?

They too are familiar. They are Denmark Vesey, Nat Turner, John Brown, Harriet Tubman and Frederick Douglass. They are Sitting Bull, Crazy Horse and Chief Joseph. They are Elizabeth Cady Stanton, Susan B. Anthony and Emma Goldman. They are "Big Bill" Haywood, Joe Hill and Eugene V. Debs. They are Woody Guthrie, Martin Luther King Jr., Malcolm X, Ella Baker and Fannie Lou Hamer. They are Andrea Dworkin and Caesar Chavez. They are those who from the beginning fought back, often to be defeated by this radical evil but knowing they were called to defy it, even at the cost of their own reputations, financial security, social standing and sometimes their lives.

The architects of radical evil are disemboweling every last social service program funded by the taxpayers, from education to Social Security, because lives that do not swell their profits are considered superfluous. Let the sick die. Let many of the poor -- 41 million people, including children -- go to bed hungry. Let families be tossed into the streets. Let the young graduate have no meaningful employment. Let the U.S. prison system, with 25% of the world's prison population, swell. Let torture continue. Let assault rifles proliferate to fuel the epidemic of mass shootings. Let the roads, bridges, dams, levees, power grids, rail lines, subways, bus services, schools and libraries crumble or close. Let the rising temperatures, the freak weather patterns, the monster cyclones and hurricanes, the droughts, the flooding, the tornadoes, the wildfires, the melting polar ice caps, the poisoned water systems and the polluted air worsen until the species dies.

Related Topic(s): Capitalism; Corporate; Education; Extinction; Jesus; Radicalization; Rebellion; Religion; Slavery, Add Tags
Add to My Group(s)
Go To Commenting
The views expressed herein are the sole responsibility of the author and do not necessarily reflect those of this website or its editors.