The "AVATAR" film & the Trees' ReBirthDay:

Celebrating Forest and the Lungs of Earth --

[Bottom line for this letter: I urge that in many communities across our continent, multireligious groups together see the new film AVATAR this month; learn with me by teleconference seminar on January 14 the connections between this film and the meaning of the festival of Tu B'Shvat that celebrates the ReBirthDay of the Tree of Life; and then gather January 29 to eat together the sacred meal of Tu B'Shvat. Why? See the unfolding below. -- AW]


Several milestones in my life came this past week as I continue climbing into and beyond my post-car-crash ordeal of the last four months. One came Sunday afternoon, when Phyllis and I saw our first movie-movie (in a movie house, not DVD) since August. We drove there in a used Prius we have just bought to replace the car that was totaled in August.

The film was AVATAR. It is an obvious metaphor for the European-USA destruction of Native America and Africa; for the corporate destruction of the Amazon forest and its tribal human eco-partners; for the US destruction of much of Iraq and parts of Afghanistan.

For the indigenous peoples of the film's planet Pandora, the most sacred places are ancient living trees that embody the life force of the planet. So for me, the film spoke powerfully in the tongue of Tu B'Shvat, the festival of the Trees' ReBirthDay.

AVATAR is extraordinary. -- Not only the technology of the filming/ viewing, 3D and FX, but most of all for its spiritually rooted progressive politics.

See it in the spirit of its watchword: "I see you." Expressing what in Hebrew is "yodea," interactive knowing that is emotional, intellectual, physical/ sexual, and spiritual all at one - what "grok" is in the English borrowing from High Martian, channeled by Robert Heinlein.

In the film, the indigenous people - the Na'vi - [in Hebrew, this would mean "prophet"] of Pandora stand in the way of an Earthian techno-conquistador corporation that is hungry to gobble up a rare mineral.

The Na'vi worship/ celebrate a biological unity of the planet and all its life-forms -- Eywa -- especially focused on great trees that are the most sacred centers of their lives. These great trees embody Eywa, the Great Mother - but S/He is more than even these trees, S/He is all life. Spirit incarnate.

We are just now approaching the ecological-mystical festival of Tu B'Shvat. It intertwines celebration of the midwinter rebirth of trees and the rebirth of the Great Tree of Life Itself, God, Whose roots are in heaven and whose fruit is our world. Tu B'Shvat comes on the 15th day (the full moon) of the midwinter Jewish lunar month of Sh'vat. This year, that falls from Friday evening January 29, till Saturday evening, January 30. 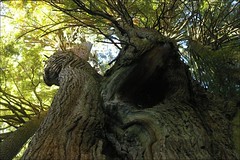 Out of winter, out of seeming death, out of seeds that sank into the earth three months before, the juice of life begins to rise again. Begins invisibly, to sprout in spring.

Rabbi Arthur Waskow, Ph. D., founded (in 1983) and directs The Shalom Center , a prophetic voice in Jewish, multireligious, and American life that brings Jewish and other spiritual thought and practice to bear on seeking peace, pursuing justice, (more...)
Related Topic(s): Avatar; Forests; Rebirth, Add Tags
Add to My Group(s)
Go To Commenting
The views expressed herein are the sole responsibility of the author and do not necessarily reflect those of this website or its editors.