For those keeping score on the Trump Administration versus the United Nations, the final vote on the Status of Jerusalem resolution is recorded above.

The official count was 128 to 9 against U.S. President Donald Trump's recognition of Jerusalem as the Israeli capital, and his pledge to move the U.S. embassy to Jerusalem. Thirty-three members of the UN General Assembly abstained.

On Thursday, the day of the vote, Israeli Prime Minister Benjamin Netanyahu was busy dedicating a hospital in the coastal city of Ashdod. He responded to the UN vote pretty much the way former Judge Roy Moore responded to his recent defeat in Alabama's election for a U.S. Senate seat. He rejected it.

Prior to the vote which rejected the U.S. President's "gift" of Jerusalem to Israel, the U.S. Representative to the UN, Nikki Haley (below), warned nations that votes against the U.S. would be remembered. She added, "We will take names," sounding more like a Mafia Don than a diplomat... 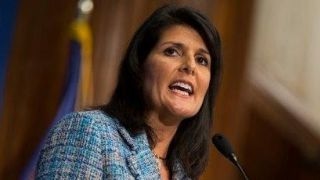 He added that the Palestinians "will not be threatened," and that the United States had insisted on "ignoring the dangerous repercussions of its decision."

Ha'aretz reported on Netanyahy's reaction to the vote:

"In a major diplomatic blow to Israel and Trump, the UN General Assembly passed a resolution rejecting the American recognition of Jerusalem as Israel's capital, with 128 member states voting in favor of the resolution and a mere nine voting against it.

"'Jerusalem is our capital, always was and always will be. But I do appreciate the fact that a growing number of countries refuse to participate in this theater of the absurd,' Netanyahu charged in a live Facebook video."

The Times also notes that the UN vote "deepened Mr. Trump's isolation over the issue." It also "threatened to alienate Arab allies of the United States and may have further complicated prospects for a two-state solution to the Israeli-Palestinian conflict."

As for the impact of the vote on the U.S., the Times concludes: "The overwhelming rejection of the American shift of position on Jerusalem, on the world's biggest diplomatic stage, was a setback for a president who is still looking for a major foreign achievement after nearly a year on the job.

Related Topic(s): Israel; Jerusalem; Palestinian; Threats; Voting, Add Tags
Add to My Group(s)
Go To Commenting
The views expressed herein are the sole responsibility of the author and do not necessarily reflect those of this website or its editors.