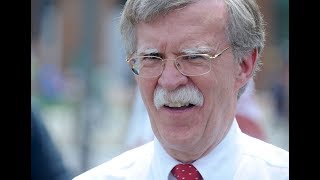 Journalist Whitney Webb recently tweeted a 2010 video clip I'd never seen before featuring US National Security Adviser John Bolton defending the use of deception in advancing military agendas, which highlights something we should all be paying attention to as Trump administration foreign policy becomes increasingly Boltonized.

On a December 2010 episode of Fox News' Freedom Watch, Bolton and the show's host Andrew Napolitano were debating about recent WikiLeaks publications, and naturally the subject of government secrecy came up.

"Now I want to make the case for secrecy in government when it comes to the conduct of national security affairs, and possibly for deception where that's appropriate," Bolton said. "You know Winston Churchill said during World War Two that in wartime, truth is so important it should be surrounded by a bodyguard of lies."

"Do you really believe that?" asked an incredulous Napolitano.

"You would lie in order to preserve the truth?"

"If I had to say something I knew was false to protect American national security, I would do it," Bolton answered.

"I don't think we're often faced with that difficulty, but would I lie about where the D-Day invasion was going to take place to deceive the Germans, you'd better believe it," Bolton continued.

"Why do people in the government think that the laws of society or the rules don't apply to them?" Napolitano asked.

"Because they are not dealing in the civil society we live in under the Constitution," Bolton replied. "They are dealing in the anarchic environment internationally where different rules apply."

"But you took an oath to uphold the Constitution, and the Constitution mandates certain openness and certain fairness," Napolitano protested. "You're willing to do away with that in order to attain a temporary military goal?"

"I think as Justice Jackson said in a famous decision, the Constitution is not a suicide pact," Bolton said. "And I think defending the United States from foreign threats does require actions that in a normal business environment in the United States we would find unprofessional. I don't make any apology for it."

So that's a thing. And it's important for us to know it's a thing because of the way things are heating up in Iran right now, since Bolton's fingerprints are all over it.

Related Topic(s): Deception; Invasion; Iran; John Bolton; Media; Sanctions; Wars, Add Tags
Add to My Group(s)
Go To Commenting
The views expressed herein are the sole responsibility of the author and do not necessarily reflect those of this website or its editors.