There's a good case to be made that the DCCC's attack on Moser only helped her. 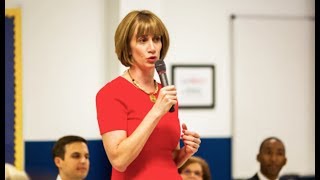 The defining characteristic of the Democratic Congressional Campaign Committee for too many years now has been its well-honed ability to snatch defeat from the jaws of victory. Drowning in conventional wisdom, disconnected from realities on the ground, and instinctively inclined to react to Republicans rather than to set its own agenda, the DCCC is such a bumbling enterprise that even the chairman of the Democratic National Committee recently distanced himself from its so-called "strategies."

When DNC chair Tom Perez was asked his opinion of a ham-handed move by the DCCC to circulate selectively edited and disingenuously framed opposition research against Texas Democrat Laura Moser, a popular progressive running in the party's crowded primary in the Houston-area's 7th Congressional District, he replied: "I wouldn't have done it.

That was a wise response, as grassroots Democrats are figuring out that taking advice from the strikingly-inept folks in DC might not make as much sense as following their own instincts in districts like the seventh, where Republican incumbents are vulnerable to defeat. After Moser answered the DNC attack by urging primary voters to reject the counsel of "Washington operatives trying to tell Texans what to do," the voters did just that.

Moser was one of the two top finishers in the initial primary, beating out several other serious, and well-funded, contenders. A May runoff will feature Moser, a tech-savvy activist who popularized the Daily Action text-messaging tool that because a favorite with resistance campaigners against Trump and Trumpism, and corporate lawyer Lizzie Fletcher, who ran with the backing of Emily's List and a number of wealthy donors. Moser won 24 percent of Tuesday's primary vote to 29 percent for Fletcher. The next closest contender, progressive physician Jason Westin, won 19 percent.

There's a good case to be made that the DCCC helped Moser, whose grassroots fund-raising spiked after the attack. She also earned a late-in-the-race endorsement from Our Revolution, the group formed by Bernie Sanders backers that had established a strong presence in Texas -- and when the results came in, Texas populist Jim Hightower, an Our Revolution Board member, said: "The voters of Texas showed they are the only deciders in the race to represent them in Congress."

Related Topic(s): DCCC; Democratic Primary; Laura Moser; Texas Politics, Add Tags
Add to My Group(s)
Go To Commenting
The views expressed herein are the sole responsibility of the author and do not necessarily reflect those of this website or its editors.