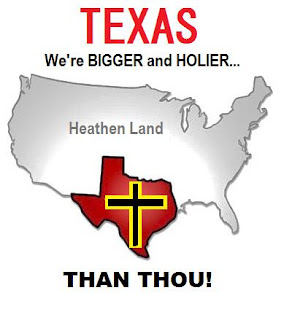 Perhaps it's just what it seems at the outset: a Holy-Roller-Only event intent on telling people that Texas is a Christian state intent on purging itself of "evil" (i.e. everyone else).

Of course, the rally is open to people of all faiths, but....

...[Don] Wildmon, AFA's* president, stressed the Christian nature of the event and said people of other religions were "free to have their own events." He insisted his group did not hate anyone, but he said that people who do not embrace Christianity were headed for eternal damnation.

"It's not just Jews or Muslims," Wildmon said. "It's anybody that rejects the free gift of salvation through Christ. The Bible teaches there's heaven and hell. Those who believe go to heaven. Those who don't go to hell."

It would seem at first that a call to prayer by the governor of a state would not draw very many religious for an obvious slap-in-the-face to the 1st Amendment, but the Christian Right is still a desperate lot, no matter how many politicians it owns: the likes of Lou Engle, Cindy Jacobs, Bryan Fischer and David Barton are planning to attend with all the fanfare they can muster. And at the outset, every comedian can envision what the prayer fest would look like: more a convention of wingnuts than a prayer rally. OK, let's try a hand at it:

Sadly, this rally is very serious in its intent to promote Seven Mountains Dominionism to the point of making it a (unofficial) religious tenet for the State of Texas.

Just look at some of the other sponsors/people in attendance:

The main source of concern about The Response  is that it is sponsored by the American Family Association (see footnote) and its chief talking head, Bryan Fischer. Mr. Fischer has become so virulent in his tirades about gays, Native Americans, Muslims and African Americans, that appearing on his daily radio show has become a litmus test for extreme Right politicians.

The Sum Of Exclusions

Considering what The Response will pray for and who will be praying, is it reasonable to suppose that Perry's revival will turn off almost as many people as it will turn on? Looking at the Texas demographics in wikipedia, seems to indicate that Perry is willfully alienating half of his state: Catholics comprise 28%, Jews comprise 2%, Mormon 2%, Islam 1%  No Religion 11% Jehovah's Witnesses 1%. Throw in the hefty gay populations of Dallas, Austin and Houston, along with churches and denominations that welcome LGBT Christians you have a figure hovering at the 49% mark.

Unfortunately for Perry, the list of people scolding him for sponsoring the event is pouring in as fast as the Right Wing notables themselves: Jewish, Islamic, Catholic, LGBT groups are coming out loud and strong against the governor.

"I want to be clear that my criticism of the governor doesn't stem from my lack of appreciation for religion, rather it comes from my deep respect for religion and from not wanting religion to be prostituted for political purposes," said C. Welton Gaddy, a Baptist minister and president of the Washington, D.C.-based Interfaith Alliance. "I think the people of Texas elected him to be the governor of the state, not the pastor of the state."